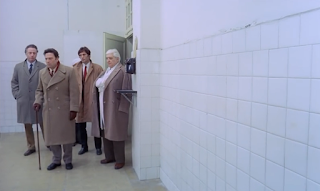 Duccio Tessari’s 1970 giallo ‘Death Occurred Last Night’ is something of a hybrid, combining elements of the procedural, the vigilante thriller and one of the sleazier tropes of the giallo itself – the prostitution ring. But unlike ‘What Have They Done to Solange’ and ‘What Have They Done to Your Daughters’, the two immediate genre touchstones that deal in said scenario, ‘Death Occurred Last Night’ plays out as a missing person drama for a good chunk of its running time, before revealing what happened to the unfortunate Donatella (Gillian Bray).

Donatella is a tall, attractive 25-year-old whose over-protective father Amanzio Berzaghi (Raf Vallone) is over-protective for a damn good reason: Donatella has the mental age of a child of three. Her innocence is such that she’s an easy target for predatory men – to her, flashing her knickers or behaving playfully is just that: playfulness. Berzaghi, working mornings as a transport officer at a trucking company, has an intricate locking system on his apartment door and grilles fitted to the windows. Donatella’s vulnerability preys on him, but his love for and commitment to her is total.

‘Death Occurred Last Night’ begins in media res with Berzaghi, fobbed off by police at the precinct nearest to him, blagging his way into Captain Duca Lamberti (Frank Wolff)’s office, and pouring his heart out re: his daughter’s recent disappearance. Lamberti is something of a journeyman copper, his career overshadowed by the achievements of his younger wife (Eva Renzi), a photojournalist whose first book is about to be published. During a rare argument, she accuses him of getting too old to make a difference. On another occasion, she (rightly) dismisses as bullshit his reasoning for not having a minor surgical procedure that would improve his quality of life (workload; responsibility; the unlikelihood of the city’s criminal contingent desisting from their efforts during his recuperation); “You’re not the only policeman,” she reminds him. Responding to Berzaghi’s plight – a regular guy who’s lost everything that gave his life some meaning – Lamberti throws himself into tracking down Donatella.

Intuiting that a mentally incapacitated young woman who has disappeared from a stable home was probably deliberately targeted for the sex trade, Lamberti and junior officer Mascaranti (Gabriele Tinti) brace pimp turned car salesman Salvatore (Gigi Rizi). Initially unwilling to assist in assuaging their access to the various brothels where Donatella might have ended up, Lamberti arranges for a few kilos of coke to be planted at Salvatore’s showroom, whereupon he promptly u-turns as regards assisting them with their enquiries. 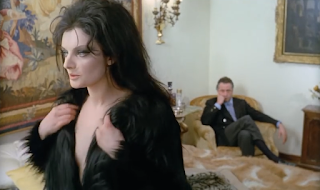 What follows is the weirdest sequence in the film, Lamberti and Mascaranti happily traipsing from cat-house to cat-house, dallying with some of the most unprepossessing hookers that exploitation cinema has ever presented to the viewing public, and tossing around money like confetti (“you can claim anything on expenses as long as you know how to fill the forms in,” Lamberti declares, suggesting that he missed his calling as an accountant). Mascaranti in particular seems to take to this avenue of investigation rather too enthusiastically. But then again, he gives every impression of being Italy’s Dirty Harry in waiting, at one point tendering his resignation to Lamberti so that he can beat the shit out of a pimp without risking a formal complaint. Beating complete and information extracted, Lamberti casually reinstates him.

Still, Lamberti and Mascaranti buck the giallo trend of useless coppers and it’s entertaining spend the first half of the film in their company as they do their best to track down the missing girl. Then – and this is only a minor spoiler – the discovery of a severely burned corpse changes the perameters of their investigation. At which point Berzaghi takes centre stage again.

What follows is a dual narrative with Lamberti and Mascaranti closing in on the perpetrators by means of dogged procedural detective work, while the grieving Berzaghi stumbles upon a clue (more by luck than judgement) which categorically establishes that at least one of the guilty parties is resident in his apartment block. Vigilantism with a dash of ‘Rear Window’.

‘Death Occurred Last Night’ uses many well-worn narrative devices, from the generation gap bickering between Lamberti and Mascaranti – I was reminded of the Commissioner and his Deputy in ‘Milano Calibro 9’ (another Frank Wolff starrer) but without the politics – to Berzaghi’s ‘Virgin Spring’-like transition from loving father to stone-cold avenging killer. The parallel investigations are join-the-dots affairs rather than a showcase for any great deductive leaps and there’s none of the overlooked-detail-proving-vitally-important that’s one of the giallo’s stock-in-trades. 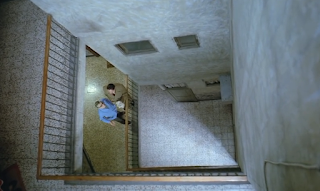 Indeed, Lamberti’s first significant break comes as a result of a conversation his wife has with alcoholic prostitute Herrero (Beryl Cunningham). An actress who appeared in a couple of dozen exploitationers between the early Sixties and early Eighties, Cunningham is a striking presence in this film, alternately taunting Lamberti for being no better than the pimps and johns who define her life (they all want something from her, the only difference is Lamberti wants information) and lapsing into self-anaesthetism when the mask of her defiance slips and the reality of her life catches up with her. Two other performances match it: Bray’s as the emotionally retarded Donatella – a nothing role on paper that she imbues with such winsomeness and fragility that her few brief scenes are heartbreaking – and Vallone, no stranger to good solid performances but who is revelatory here.

The quality of performances, aligned with Tessari’s pacy but unobtrusive direction, are what make ‘Death Occurred Last Night’ such a taut and compelling piece of work. They transcend the almost total lack of action – there are two foot chases, neither of which last more than a minute, and both of which occur significantly past the hour mark – and bootstrap the movie above the boilerplate genre beats of its narrative. Nor are there any of the overt stylisations or grand guignol set-pieces traditionally associated with the giallo*. And while these leave a lot of boxes on the Agitation of the Mind giallo checklist unticked, they benefit the film immeasurably in terms of its dramatic impact.

*Having said that, the film still has its moments of what-the-fuckery, including a mortuary scene where the corpse is apparently identified by its feet, and Lamberti taking time out from the investigation to strum his guitar and make up a little song about his sinusitis. Plus there’s a continuity error that the filmmakers blithely overlook in order to ram the title into a line of dialogue.
Posted by Neil Fulwood at 4:10 PM