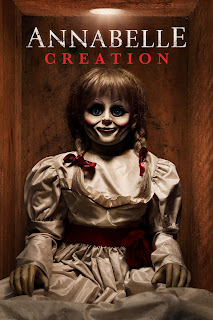 The ‘Conjuring’ universe – because a group of interconnected films can’t be a series or a franchise anymore, oh no, it’s got to be a fucking universe – has, to date, notched up five entries of which, arguably, there has only been one real dud. That dud was John R. Leonetti’s ‘Annabelle’, and when I wrote about it for the twelfth entry in 2016’s 12 For Halloween, I concluded: “Remarkably, it made a fuckton of money at the box office – over $250 million from a budget $6.5 million – making ‘Annabelle 2’ an inevitability. David F Sandberg, whose feature-length debut ‘Lights Out’ did a similar cleaning up at the box office number, is attached to direct. Whether a narrative or psychological hook can be found that makes the Annabelle doll scary – pace the lifeless ventriloquist’s dummy in ‘Magic’, still the best scary doll film – remains to be seen, but the director trade-up is to be welcomed.”

That Sandberg, on the evidence of the splendidly creepy ‘Lights Out’, would make a better film than Leonetti was a given. That it would be this good was something I didn’t see coming. Let’s face it: the odds were stacked against him. The Annabelle doll provides a moderately spooky pre-credits sequence to the original ‘Conjuring’ but there was little enough there to suggest an entire 90-minute prequel was required to fill in the backstory. And has there ever been a prequel that wasn’t an exercise in redundancy? Prequels are what happens when studios flog there cash cows so hard that there’s no mileage after in fucking sequels, for Christ’s sake! ‘Annabelle: Creation’ looked set to be a nakedly shameless exercise in milking it. How nakedly shameless? It’s a prequel to the fucking prequel! That’s how nakedly shameless.

‘Annabelle’ fails because … well, it fails on many many levels, but principally it fails because of the nastily cynical Manson-like cult murders upon which it hangs its narrative hook – an aesthetic decision that’s made worse by the fact that it then goes on to rip off ‘Rosemary’s Baby’ for all it’s worth (‘Rosemary’s Baby’ director Roman Polanski’s then partner Sharon Tate was brutally slaughtered by Manson’s followers) – and because it can’t even be bothered to do anything challenging or remotely useful with the material, instead aiming low with the tiredest set of genre tropes imaginable. Moreover, there’s sweet f.a. in ‘Annabelle’ to suggest that an earlier chapter was required to set up the events that it portrays.

‘Annabelle: Creation’, against the odds, manages not only to bring a new provenance to the Annabelle mythology – an infinitely more effective and memorable one than in Leonetti’s film, too – but emerges as a very different beast aesthetically. Dialling back the setting to the 40s and 50s, ‘Annabelle: Creation’ feels different to the other episodes in the ‘Conjuring’, ahem, universe. Those films, grounded in the 70s, explored first a rural American haunted house, then a grimy English haunted house – no rambling gothic mansion for ‘The Conjuring 2’: instead a glum council house allotted to an underprivileged single parent family. ‘Annabelle: Creations’ returns to the American setting, but this time a dustbowl, dirt farm evocation of Nowheresville USA, all creaking front porches, shadowy barns, rusty pick up trucks and the glaring pitiless sun beating down on it all. Maxime Alexandre’s cinematography owes more to the western than the horror film in the exteriors, which is not to say that he doesn’t know how to manipulate negative space and play with focus and visually misdirect the audience in order to make the scare scenes that much more effective. He does indeed, and one of the chief pleasures of the film is how beautifully Alexandre’s visual sense gels with Sandberg’s mastery of slow burn tension and precision timing. For all that ‘Annabelle: Creation’ was doubtless conceived as a dollar-bottom-line profit-spewer, for all that it’s a prequel to a motherloving prequel, the craftsmanship on display is to be marvelled at.

Kudos, also, to the cast. Anthony la Paglia does his best work in ages as a grieving toymaker who, in the aftermath of his daughter’s death (depicted in a shocking blunt pre-credits sequence that has zilch to do with the supernatural), opens his rambling old house to a group of orphaned girls under the charge of idealistic nun Sister Charlotte (Stephanie Sigman). Miranda Otto, as the reclusive matriarch, creates spiky but just-about-sympathetic character where she could easily have gone for the tragic, melodramatic Mrs Rochester type that the script wants to edge her towards; she’s better in this than anywhere else in her filmography. Talitha Eliana Bateman and Lulu Wilson, as fast friends sorely tested by supernatural malevolence, turn in the kind of work that would count as career bests from plenty of seasoned performers three or four times their age.

Narratively, things are kept simple. For a good chunk of the running time, little attempt is made to explain the happenings that centre around the Annabelle doll: weird shit just happens and man that’s all she wrote. And that’s all ‘Annabelle: Creation’ really needs to do in order to work: take a creepy old house and fill it with creepy unexplained happenings. That Sandberg is smart enough to build up the tension slowly but inexorably, and that his creative team get just about every durn thing right in terms of staging and production design, is just the cherry on the cake.

That he finally brings everything to the boil in an 18-minute set piece that plays the viewer’s nervous system like a piano concerto – a dark, Mephistophelean one, perhaps by Liszt – is where ‘Annabelle: Creation’ makes the leap from very good genre flick to bona fide great horror movie. That he follows this with two audacious flash-forwards to link up with that terrible opening to ‘Annabelle’ – does so without pissing all over everything he’d achieved in the preceding hour and three quarters – is quite the achievement.
Posted by Neil Fulwood at 10:49 PM

Did you hear there's a 12 word phrase you can communicate to your crush... that will induce deep emotions of love and impulsive appeal for you deep inside his heart?

That's because hidden in these 12 words is a "secret signal" that triggers a man's impulse to love, admire and protect you with all his heart...

This impulse is so built-in to a man's genetics that it will make him work better than before to to be the best lover he can be.

In fact, fueling this mighty impulse is so binding to achieving the best possible relationship with your man that the instance you send your man one of the "Secret Signals"...

...You will soon notice him expose his mind and soul for you in such a way he never experienced before and he will see you as the one and only woman in the galaxy who has ever truly understood him.