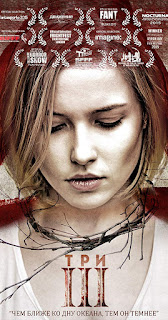 Let’s get the one overriding criticism of ‘III’ out of the way. Let’s take a deep breath, boys and girls and creatures of darkness, and say it together:

‘III’ is not particularly original.

In fact, let’s double down on that, purely in the interests of clearing the decks of the one inescapable negative of tonight’s offering. Let’s take a deep breath, ladies and gentlemen and monsters under the bed, and say it together:

‘III’ is a Russian film that is haunted by the grim landscapes and mindscapes of Tarkovsky, the disturbing dream-(il)logic of David Lynch and even a soupçon of Tarsem Singh’s ‘The Cell’ if ‘The Cell’ had genuinely been a descent into psychological nightmare and a not a boilerplate cop thriller.

(And while we’re getting things out of the way, it should be mentioned that this isn’t ‘Three – III’, the Kelly Brook on a desert island hand-shandy enabler from a decade or so ago. Y’know, just in case the Tarkovksy/Lynch/Singh comparison didn’t tip you off to that fact.)

‘III’ is set in a small town that doesn’t look like it’s changed much since medieval times apart from the provision of running water. Not that sanitation has done much for anybody’s life expectancy: a plague is cutting a swathe through the residents like 2017 through rock stars*. Sisters Ayia (Polina Davydova) and Mirra (Lyubov Ignatushko) are caring for their ailing mother when the film opens and receiving spiritual counsel from Father Herman (Evgeniy Gagarin). After her death, Mirra – already sceptical of Herman’s pious placations – turns away from the church, while Ayia draws closer to the priest. Mirra seems to fall prey to the contagion, but the escalating series of strange visions that Ayia begins to experience suggests that the real cause of her sister’s malaise might be something deeper and darker. A notebook Ayia finds in Herman’s possession indicates that his interest in the ultimate mystery goes a way beyond the teachings of the scripture and then some. When Herman admits that there’s a ritual he can perform which will take her into Mirra’s dream state – thuddingly obvious caveat: it might be a tad dangerous – Ayia accepts unhesitatingly.

This set-up, by the way, takes us to about the 45 minute mark in a film that runs just 1 hour 17 minutes. That’s another thing about ‘III’: it’s leisurely paced. Sure, even before director Pavel Khvaleev cuts loose with the ritual and the surreal sequence that it presages, ‘III’ delivers plenty of images that you’d swear had been reeled out of your worst nightmares by an unholy conflation of the Fisher King and the Sandman but it still takes its damn time, even as it’s weirding you the fuck out.

Equally visceral imagery is the order of the day once Herman conducts the ritual and Ayia descends into Mirra’s subconsciousness, only less fantastical, more brutally realistic. This is perhaps the most interesting thing the film does: become less dream-like once Ayia finds herself in what is essentially a dreamscape. Not that Khvaleev does much with the dichotomy, which is a shame as ‘III’ had the potential to be as cerebral as it is symbolic, as psychologically penetrating as it is imagistic. Instead, and literally just as the last seven or eight minutes are slipping through the sand-timer, he takes a sudden and jarring swerve with a big reveal that could have worked had there been a single fucking thing in the rest of the film that laid any groundwork for it.

All told, the derivative aspects, the leaden-footed pacing and the abrupt, narratively-unsupported ending should add up to a disappointing viewing experience for the horror fan. Yet ‘III’ avoids being entirely a disaster. Principally, it’s Igor Kiselev’s cinematography and the production design that save the day, though kudos are due to Davydova and Ignatushko. Surmounting a scrappy script that paints them as little more than ciphers, both women emerge with restrained, nuanced performances that linger in the mind as effectively as the imagery.