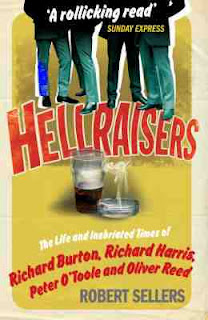 There are some film books that effortlessly pin down an era in cinema history, such as Peter Biskind’s ‘Easy Riders, Raging Bulls’. There are some that chronicle in car-crash detail the disastrous consequences of a misconceived, miscast, all round flop – Julie Salamon’s ‘The Devil’s Candy’. There are some autobiographies that are so staggeringly egomaniacal (Michael Powell’s ‘A Life in Movies’) or so elegantly persuasive (any of Dirk Bogarde’s memoirs) that the truth hardly matters. There are diaries that reveal the day-to-day frustrations of even the greatest directors (Andrei Tarkovsky’s ‘Time Within Time’). There are biographies that so effectively get under the skin of their subject (Kevin Brownlow’s book on David Lean; John Coldstream’s on Bogarde) that they remain unforgettable.

Then there’s a book like Robert Sellers’s ‘Hellraisers: the Life and Inebriated Times of Richard Burton, Richard Harris, Peter O’Toole and Oliver Reed’, which is an unapologetic way-hey-the-lads celebration of the collective boozing, brawling and bad behaviour (womanizing needs to be added but I can’t think of a synonym beginning with “B” which will preserve the alliteration) of four of the most devil-may-care talents ever to grace the silver screen.

Because believe it or not, between the bars and the arrests and the brawls with paparazzi and the on-off romances (mentioning no names, Mr Burton) these boys actually made the odd film or two.

In fact, between them, they clocked up some of the most visceral, intense, challenging, dynamic and kick-ass performances in cinema: think of Burton losing it on the pulpit in the opening scene of ‘The Night of the Iguana’, Harris looking like he’s about to ask the fucking camera outside in just about every frame of ‘This Sporting Life’, O’Toole casually announcing “we have taken Aqaba” in ‘Lawrence of Arabia’, Reed getting stuck into a little nude wrestling with Alan Bates in ‘Women in Love’. And that’s just for starters … 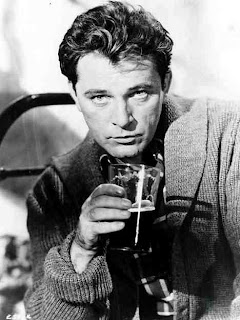 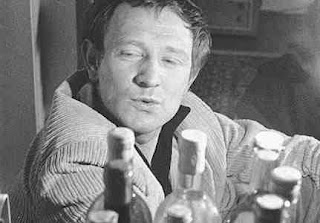 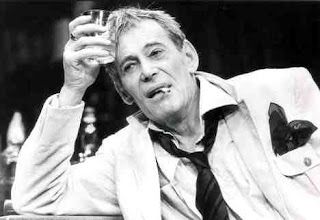 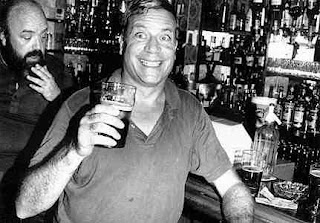 From next month I’ll be running an ongoing series on The Agitation of the Mind, celebrating the bad boys of British cinema. There will be booze. There will be blood. There will be some fucking great movies. It all kicks off first week in May but until then the bar is open at The Agitation of the Liver, so raise your glasses to these gentlemen, drink to their hellraising and rue the fact that we live in a world where Zac Efron headlines movies, launches a thousand merchandising products and doesn’t even have the common decency to trash a restaurant, shag for England (oh all right then, America) and wake up in a holding cell wondering what time the pubs open.