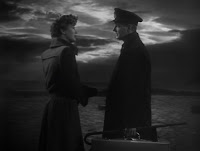 The penultimate of Powell and Pressburger's wartime collaborations, 'I Know Where I'm Going!' is beautifully simple in terms of narrative and yet yields more and more with each successive viewing.

Ambitious twenty-something Joan Webster (Wendy Hiller) has bagged herself a rich older man, Sir Robert Berringer, CEO of Consolidated Chemical Industries. The date set for their wedding, she begins a journey which will take her to the Scottish Isles, specifically the isle of Killoran which she is led to believe Berringer owns. Arriving at Tobermory, a storm prevents her from crossing to Killoran. While the storm rages and Joan impatiently waits, she makes the acquaintance of some of Sir Robert's toffee-nosed friends, as well as Torquil MacNeil (Roger Livesey), a navy officer on leave and also wanting to make it to the island.

In quick succession, Joan learns from the locals that Sir Robert is a parvenu ("quite the little king, he is"), that MacNeil is the actual Laird of Kiloran (he leases the island out: "if I rent it for three years, I can live on it for six - Highland economics"), that MacNeil's friends are the opposite of Sir Robert's (earthy instead of stuffy, full of life instead of half dead), and that - most troublingly of all - she's starting to fall for him.

Desparate now to make the crossing, her entreaties to boatman Ruairidh Mhor (Finlay Currie) fall on deaf ears, so she bribes his impressionable son Kenny (Murdo Morrison). But the storm proves the least of their worries when the diminutive boat gets under way and the raging whirlpool that is Corryvreckan threatens to drag all on board to their deaths ...

As he had proved with his pre-Pressburger masterpiece 'The Edge of the World', Michael Powell was an Englishman in love with the rugged landscape, ancient mysticism and cultural heritage of Scotland (and in this respect a man after my own heart). Many a film has drawn from a Scottish setting its inspiration, its flavour and its wry humour - 'Whisky Galore!' (up next on the personal faves project) and 'Local Hero' being sterling examples. 'I Know Where I'm Going!' takes gold to their silver and bronze.

It also belongs to a tradition in cinema that stretches back to the very beginning of the art form, that of an investigation into the urban vs the pastoral, the city vs the country; a tradition perhaps best epitomised in silent film by F.W. Murnau's 'Sunrise: A Song of Two Humans'. There is much in 'I Know Where I'm Going!' that evokes the cinematic purity of silent movies. The voice-over accompanying the opening sequence could easily be a series of title cards interspersing the imaginative tableaux that sketch in Joan's growth from small child to young woman, a fixation on self-betterment greedily evident at every stage.

Subsequent scenes depict Joan in her element - a city girl, in fancy restaurants, trendy clubs; in charge, in control; dead certain of everything. Her idea of Scotland, however, is woefully naive: some words on a map, a snatch of the hackneyed old song "Ye Tak the High Road", a dream of her train trundling through a tartan landscape. The real Scotland is as fiercely elemental as it is beautiful. Weather is a metaphor for the passion that becomes aroused in Joan; a force she cannot control. Almost immediately on arrival, a strong gust of wind rips Sir Robert's carefully compiled itinerary from her hand and deposits it in the harbour. The storm dashes her plans of marrying him. Corryvreckan nearly drowns her. Ultimately, though, it's her wedding dress that's lost to the waves, and Joan is freed from the falsity of her engagement to Sir Robert and a marriage that would have been founded on materialism.

Anti-materialism was something of a theme in Powell and Pressburger's work. 'A Canterbury Tale' was a hymn to everyday miracles. In 'A Matter of Life and Death', art and science are the noble pursuits. 'I Know Where I'm Going!' values tradition, loyalty and comradeship. When Joan remarks that many of the islanders are poor, MacNeil corrects her: "They're not poor, they just don't have money." City girl that she is, Joan mistakenly believes the two states of being are synonymous.

If the sentiment sounds twee - the kind of message that many a Hollywood production would labour - the execution is anything but. In 'Arrows of Desire', his illuminating but too-brief study of Powell and Pressburger's work, Ian Christie notes that some scenes have "a rare cinematic intensity ... A fable of the age-old opposition between head and heart, the corruption of riches and the collision between commerce and tradition, becomes also a fable of post-war optimism."

But not restricted to post-war audiences. 'I Know Where I'm Going!' is a fable for any age, a timeless and life-affirming work of art, visually beautiful and emotionally transcendental.
Posted by Neil Fulwood at 12:36 AM