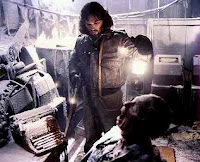 Right. I’m going to kick off this piece with a bit of straight-up, unapologetic opinionism:

‘The Thing’ is to the horror movie what Beethoven’s 9th is to the symphony, what Henri Cartier-Bresson is to photography and what Talisker is to single malt whisky. It’s the bee’s knees; the mutt’s nuts; the daddy; da bomb.

I dig ‘The Thing’. Here’s a few equally superlative-laden paragraphs to explain why.

Did I mention that Dean Cundey’s cinematography was one of the chief assets of ‘The Fog’? That goes double here. Of the five John Carpenter films he shot – and all of them look amazing – ‘The Thing’ boasts easily the most impressive visuals. The anamorphic ratio is used to astounding effect. Cundey’s work here puts him in the same league as Lucien Ballard, Vittorio Storaro or Roger Deakins. Besides, you’ve got to love someone who has ‘Ilsa, Harem Keeper of the Oil Sheikhs’ and ‘Jurassic Park’ on their CV.

Bill Lancaster’s script is tight as a snare-drum, shucking off the McCarthyist undertones of Howard Hughes’ original (‘The Thing From Another World’) and getting back to the isolationism and clammy paranoia of the source material, the short story ‘Who Goes There?’ by John W. Campbell. It avoids politics other than to have Nauls (T.K. Carter) speculate, “Maybe we’re at war with Norway.”

The incident that occasions this conjecture is a superbly realised set-piece which opens the film. A husky runs panting through the wastes of Antarctica, towards United States National Science Institute Station 4, whose mismatched occupants are weathering a particularly ferocious winter and unable to effect radio contact with the outside world. The husky is being pursued by a helicopter from a Scandinavian research complex. The two Norwegians in said whirlybird use semi-automatic rifles and grenades against it, but demonstrate terminal incompetency. Not only does every shot miss, but one of them drops a grenade into the snow as the helicopter sets down, blowing up both ’copter and pilot and barely escaping with his own life. When he stalks the husky into Station 4, letting rip with another pathetically aimed burst of fire, base commander Garry (Donald Moffat) proves himself a considerably better shot and the Norwegian is despatched before anyone can ask themselves – and they certainly can’t ask him now – just why it was so important to whack the dog.

While pilot MacCready (Kurt Russell) and medico Dr Copper (Richard Dysart) brave the bad weather and fly to the Norwegian base – they find everyone dead, the place half burned to the ground, and the remains of something that doesn’t look human – tensions rise at Station 4 and it’s not long before Garry’s crew have more to worry about than Nauls playing his music too loud or MacCready accusing the computer of cheating at a chess game and tipping a glass of J&B into the mainframe.

If the presence of J&B evokes the giallo, then the ice station is as effective a backdrop to the carnage that ensues as any fashion house or stylish apartment building, and who needs a black-gloved killer with a fetish for broken dolls and sharp knives when a shape-changing alien thingie is running around killing the cast off in a various horrific ways, assimilating them into its physiognomy and imitating them in order to get close to its next intended victim.

One of the scientists, Blair (Wilford Brimley), postulates that if the creature were to make contact with a heavily populated area the effects on humankind would be apocalyptic: mass infection within 27,000 hours. A little knowledge is a dangerous thing, and Blair reacts by going loco, smashing the radio to pieces, destroying supplies and equipment, and disabling the snow-cat.

MacCready, coming to the fore as a leader when Garry almost shoots Childs (Keith David) and resigns his position professing no further confidence in himself, overpowers Blair and orders him locked away. Urging everyone to stay together and “watch who you’re with”, MacCready is nonetheless powerless to prevent further deaths. Mistrust runs rife. Rivalries surface. There is speculation that MacCready himself is the thing.

The blood reaction test MacCready devises to prove who’s who is a showstopper in a film wall-to-wall with tense set-pieces, edgy confrontations and jump-out-of-your seat moment. Carpenter generates tension worthy of Hitchcock. Elsewhere, Rob Bottin’s FX work is nothing short of miraculous for a film made twenty-seven years ago and without a pixel of CGI. If H.R. Giger’s work on ‘Alien’ was terrifying, Bottin’s achieves the sweaty clamminess of a waking nightmare, grotesqueries out of Hieronymus Bosch come to life.

‘The Thing’ is Carpenter’s masterwork: there isn’t an ounce of flab on the film; there isn’t an image or a line of dialogue that doesn’t empirically contribute to the overall sense of gnawing tension and unremitting dread. ‘The Thing’ is one of the darkest horror films there is – not because it’s visceral, unflinching and dripping with gruesome effects (although it certainly ticks all of those boxes and then some), but because the horror comes from the darkest place of all: the human condition.

‘The Thing’ throws a group of ordinary people (ordinary in the sense that, while they might be pilots, doctors or scientists, they’re ultimately just a bunch of guys doing a job and it’s generally a shitty job and they bitch about it and bitch at each other and in short behave exactly how men in any job behave) – next to Peckinpah’s ‘The Wild Bunch’, ‘The Thing’ is one of cinema’s most acutely-observed statements on masculine interaction – into an extraordinary situation and observes how little friendship, camaraderie and calm, reasonable behaviour count for anything once a huge dose of paranoia has been injected into the proceedings.

And having done this, it segues from an explosive denouement to an open-ended coda, signing off with an enigma in place of an ending, and making sure ‘The Thing’ will rattle around in your mind, in your imagination, in your subconscious for plenty of time to come. Years, in my case.
Posted by Neil Fulwood at 11:04 PM

Love this film! Even went so far as to pick up the video game which acts as an unofficial sequel of sorts. It is actually quite good. The game makers really captured the mood and atmosphere of the film. It's the closest you can get to being in it, I suppose.

The level of paranoia in this film is something else and the camerawork really conveys a claustrophobic feel which is subtly unsettling.

Shit, I didn't even KNOW there was a video game!! I'm going to be tracking that one down!

I love the fact that Carpenter doesn't make the claustrophobia and paranoia political or a metaphor for anything. Is it what it is. You have your doubts about EVERYONE. It's one of those rare horror films that doesn't let you off the hook, doesn't give you a way out or a moment of catharsis or the release of nervous laughter.

No wonder it struggled to find an audience when it was first released.

"No wonder it struggled to find an audience when it was first released."

No kidding! Also, don't forget that was the summer of ET which crushed all competition. And so people wanted to see a warm, cuddly alien and not one bursting out of people's bodies. OH well..

Yeah, the game is awesome. I pretty bought an Xbox for it and the equally awesome THE WARRIORS game which lets you play Swan and his gang as they go through the film!