How to kill a vampire: garlic, stake through the heart, franchise reboot … 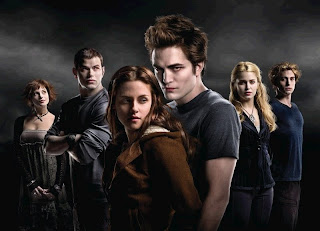 In terms of adaptations, ‘Twilight’ (directed by Catherine Hardwicke) appeared in 2008. It earned poor reviews, including a scathingly sarcastic one on The Agitation of the Mind. The “twi-hards” lapped it up.

‘New Moon’, with Chris Weitz taking over directorial duties, came out late last year and despite promising my readership that I would subject it to a similar satirical savaging, I just haven’t been able to bring myself to watch it. Reviews were no better than ‘Twilight’ and its IMDb rating is lower. None of which really mattered, since the “twi-hards” once again lapped it up.

Now, to my way of thinking logic would dictate going straight into pre-production with ‘Breaking Dawn’ while (a) the principle cast can still almost get away with playing teenagers and (b) the “twi-hards” are still interested.

But no, Summit Entertainment have scrapped plans to film ‘Breaking Dawn’ and concentrate instead on rebooting the franchise. Which immediately raises the question: is ‘The Twilight Saga’ a franchise? With only four novels to go at in terms of source material and only two films thus far released, surely it is (as the catch-all title suggests) a saga.

Moreover, aren’t franchise reboots traditionally undertaken when a longstanding series has become moribund and is in need of reinvention, ie. ‘Batman Begins’ or ‘Casino Royale’? Summit haven’t even been able to gauge the box office performance of ‘Eclipse’ yet. Sure, ‘Twilight’ and (from what I’ve heard tell) ‘New Moon’ are lousy examples of the filmmaker’s art, but they’ve proved profitable and the “twi-hards”, as much as I take the piss out of them, seem genuine in their love of both the books and the movies. They’ve made the films successful; the least Summit Entertainment could do is finish what they started and film the last instalment of the saga before going back to the drawing board and reinventing it.

Which raises the question: how exactly does one reboot a high school vampire romance saga. Over to the VP of Summit Entertainment:

“We feel that the series should appeal to a newer generation. We’re pleased that the Twilight saga has reached a number of fans, but we want to expand on that fanbase by putting Bella and Edward in middle school. We also would like to make a grittier, more contemporary take on vampires.”

Now, I’m a limey and I’ll freely admit I don’t have the first clue about the US school system. But middle school? Doesn’t that imply the characters will be younger than in the current films? And how does retarding the protagonists’ ages sit with “a grittier, more contemporary take”? Did somebody go see ‘Let the Right One In’ then walk into a production meeting next day and say “Hey, guys, I’ve got this awesome concept”?

And how does this bode for the future? Can we expect a really down and dirty ‘The Addiction’-meets-‘Near Dark’-stylee incarnation of ‘The Twilight Saga’ when it gets its 2020 reboot and they set it in a toddlers’ playgroup?

Im flabbergasted with these news! I mean, didnt this series JUST get started?

A reboot doesnt make sense at all, this series is just getting started, what the hell?

Thats as if they had decided to reboot the Harry Potter films by the third movie! Thats fucking stupid!

Sounds to me like they simply want to make more money by including even younger kids in their target audience. This isnt a genuine desire to reboot a series...this is simply put GREED.

Please dont take my last comment as if I gave a rats ass about this series of films. Cause I dont. They are a freaking joke to me.

I know what you mean. My response to reading the news (a 500 word post, for heaven's sake!) is totally out of proportion to my complete lack of interest in the films. But I feel pissed off - like you at the production company's greed (they're basically conning the fans into seeing the movies all over again before they complete the series) - and also because the fans deserve to see the full series with its original cast.

Hey, if it's good enough for Spider-Man 4, which seems to be what someone was thinking of...

Got the urge to zap a BAD vampire with your iPhone? There's an app for that now! The Vampire Buster app!

Sweet Jesus...how can you reboot a series that only has FOUR BOOKS written about it. At least with Spider-Man and Batman, there are hundred of stories and 60+ years of history. But rebooting something that has almost as many movies to its name as it does books...aaarrggh<>

Hmm, I should know better than to use < and > in a post as that goes bye-bye when you publish your comment.

Anyways, after my "argh" at the end there was supposed to be the sound of my head exploding.

In fact it exploded so much that I didn't even notice that TFC made essentially the same point I did. Seriously, I'd be annoyed if I was a Twilight fan, and I make fun of those people every chance I get.

Sam - granted, 'Spider-Man 3' was a bit of a debacle, but surely we all had enough confidence in Raimi to get the series back on track. What is it with executives and reboots at the moment?

Kate - thanks for the link, unfortunately I'm one of the few people in the western hemisphere who hasn't yet invested in an iPhone. Should I do so, I'll be certain to zap bad vampires on it.

Troy - I trust the explosion of your head was neither painful nor fatal. It's funny isn't it? You, Francisco and myself have all thrown our hands up in despair at Summit Entertainment and vented our spleen in no uncertain terms ... and yet none of us give a crap about the Twilight movies!

Better TWLIGHT than a movie or franchise that us film snobs actually care about, right? It is pretty ridiculous, though.

Neil, my compliments to you for being able to moderate this discussion with a figuratively straight face.