In for a penny, in for a hundred movies 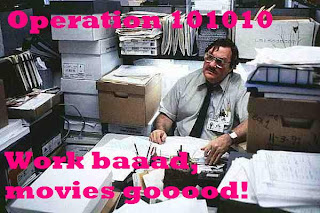 Operation 101010, as detailed here at Final Girl and here at The Death Rattle, builds on the 999 project from last year (an epic blog-a-thon I somehow managed to remain completely ignorant of). The deal with the 999 project was to pick 9 genres or subgenres and watch/blog about 9 films from each of them during '09.
Operation 101010 recalibrates the challenge for 2010: during the course of the year watch 10 films each from 10 genres/subgenres. I probably should have been a little more attuned to this last year: I'd have only committed myself to reviewing 81 films, not 100.
Ah well, what the hell. Let's do this thing:
1. Clint Eastwood movies. It's the grizzled icon's 80th birthday on 31 May, so I'll be dedicating the whole of that month to a celebration of Eastwood as actor, director and icon.
2. Werner Herzog movies. I titled this blog after a Herzog quote and it's been a few months since I've written about any of his movies. Time to re-engage with the Teutonic maverick, methinks.
3. Anime. This is a strand of cinema my wife has introduced me to. Before I met her, I'd seen 'Akira' and a couple of Miyazakis and that was it. I've seen a hell of a lot more since. (Having said that, expect a heavy Studio Ghibli bias in the 10 titles.)
4. Gialli. Homicidal maniacs in trenchcoats and black leather gloves. Perversely aestheticized death scenes. Monumentally ineffectual police officers. A better-than-average chance of Edwige Fenech in a starring role. What's not to love?
5. Documentaries. The truth can be stranger than fiction. And more dramatic.
6. Eurovisions. I was going to select French movies, since this most cinematically inclined of nations has been under-represented on The Agitation of the Mind. Then I started thinking about all the other European countries who produce interesting, innovative and inimitable films and decided to throw the net a little wider. Each of the 10 choices in this category will be from a different European country.
7. Comedies. Trawling through the Agitation archives, I came across reviews of 'Blazing Saddles' and 'Whisky Galore'. I think we need a few more laughs round here.
8. Biopics. I tend to shy away from biopics, because they're generally worthy-but-dull hagiographied Oscar-bait. My mission: find 10 examples that prove me wrong.
9. Impulse buys. Picture this: I'm noodling around one of the superstores doing the monthly food shop (my philosophy: buy cheap, buy in bulk, freeze stuff, battle the crowds in those shitty places as infrequently as possible) when my attention is caught by a DVD title in the bargain bin. It's something I've not seen before. Maybe the reviews were good but I missed it on the big screen. Maybe I was mildly interested but didn't want to fork out £7 on a cinema ticket in case it turned out to be a POS. Maybe someone recommended it. Maybe the girl on the cover is a fox. Whatever the reason, it's £2 or £3 so why the hell not? In the trolley it goes. 10 films, then, that I've never seen before, were bought on a whim and might be undiscovered masterpieces, or suck harder than a Dyson on crack, or anything inbetween.
10. Films with numbers in the title. (Sequels disallowed. That would just be lazy.)
In selecting the 10 areas/genres/filmmakers I'll be centering on, I disallowed already announced projects such as the ongoing Hellraisers series, July's Shots on the Blog crime films bonanza and the still-at-the-polls next retrospective (besides, several of the shortlisted directors have yet to push their filmography into double figures). I have, however, allowed the inclusion of any titles under the Personal Faves banner that fit into the Operation 101010 categories.
Other than that, the rules stipulate that cross-categorisation is not permissible. So for example, 'Four Flies on Grey Velvet' - while satisfying the requirements of the gialli, Eurovision and number in the title categories - could only be cited once. In this case, I would consider the fact that it's a giallo as its defining quality. As an example of Italian cinema I would be more likely to pick a film by Visconti, Antonioni, Fellini or de Sica. As a film with a number in its title, the number holds equal prominence with the colour and the animal (all are staples of giallo titles: see 'Seven Dead in the Cat's Eye' or 'The Black Belly of the Tarantula'); the number isn't definitive in the way 'The 39 Steps' is). Likewise, I would consider that director holds prominence over other categories, therefore 'The White Diamond' would be one of the Herzogs, not the documentaries.
Right, then. That's the small print taken care of. Let's make a start ...
Posted by Neil Fulwood at 5:09 PM

I've been doing my own column of Impulse Buys, for awhile called, The Unseen.

It's actually a lot of fun. You have to remind yourself, "Now just why the hell did I get this?" If you're lucky you get some jaw droppers in there that you'd have never seen otherwise (IE Bloody Mama, which is absolutely filthy)

I've been enjoying your unseen reviews. I was going to name this category after your series, but I didn't want homage coming off like plagiarism. If you don't mind, though, I'd like to borrow your structure of kicking off each article with a "why did I buy this?" precis. (Having said that, I might come to regret some of these admissions ... or come to endure some barbs of sarcasm from Mrs Agitation!)

Nice. Looking forward to your posts, especially Eastwood and Gialli!

Anonymous said...
This comment has been removed by a blog administrator.
4:12 AM

Aaron - yeah, I'm looking forward to the Eastwood-fest in May. I'm currently reading Patrick McGilligan's biography and Clint emerges as a bit of swine. I can't decide if the weight of evidence is against him, or whether McGilligan set out to do a character assassination in the first place.

To the guy whose comment I've just deleted (including the link to the Japanese sex site) - my writing may lose something in translation, but none of the categories I've picked for Operation 101010 have anything to do with schoolgirls. (Unless I review 'What Have You Done to Solange?' as part the giallo series.)

This is a great idea. I'm very tempted to try it myself; we'll see, I'm trying to settle on the 10 categories.

For your biopic category, I generally share your antipathy to the genre, so I'll share a few suggestions for worthy biopics that probably aren't what most people think of when they think of the biopic: Ali, Mishima: A Life in Four Chapters, Caravaggio, Wittgenstein, Sergeant York, Superstar: The Karen Carpenter Story, The Elephant Man, etc. All great, unconventional biopics.

I've not seen 'Wittgenstein' or 'Superstar' (although its reputation precedes it!), but all of the others are sterling recommendations.

Deciding on 10 categories was, for me, a thorny business. I didn't want to make them too obvious, too repetitive (at one point my makeweight of films with numbers in the titles was going to joined by films with colours in the title), too banal or too obscure. Nor did I want to overburden it towards actors or directors.

I'll be interested to see what categories you pick and I look forward to reading your reviews.

How about Seven Samurai for numbers :)

You're on! Look for a 'Seven Samurai' review sometime next month.