THE SILLITOE PROJECT: The General 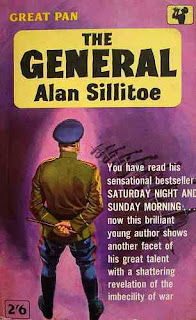 Although well-received in some quarters (“Sillitoe scores a hat trick” - Punch), ‘The General’ confounded many people. Highly anticipated after the one-two of ‘Saturday Night and Sunday Morning’ and ‘The Loneliness of the Long-Distance Runner’, here was a curious fable, miles removed from the back-streets of Nottingham, its twin protagonists the titular military type and a standoffish orchestra conductor who ends up as his prisoner. A fable, moreover, that occurs in a fictitious country, during a period of time that’s deliberately out of time, and loaded with philosophically charged and decidedly non-naturalistic dialogue.
Kind of like Shane Meadows following up ‘Small Time’ and ‘TwentyFourSeven’ with ‘Ivan’s Childhood’.
With an author’s note that “East and West in this novel bear no relation to the east and west of modern times”, it’s clear from the outset that ‘The General’ is 160 pages of allegory. The country in which the story takes place is never named, the General himself remains anonymous beyond his rank, the army he commands are only ever referred to as “the Gorsheks”, and the members of orchestra who become his prisoners have names like Evart, Starnberg and Armgardson – suggesting some shared European (possibly East European) heritage, but remaining frustratingly elusive.
The story itself is pure simplicity: the General puts the orchestra into captivity after their special train finds itself behind the lines. High command order him to execute them. The General doesn’t want to, and they an extension of their lives with an impromptu concert. Yet Sillitoe never seems to milk the inherent tension, instead structuring the novel as a philosophical enquiry into various states of mind, most prominently those of the General and Evart, the conductor.
As a result, characters fling entire pages of cerebral dialogue at each other. Sillitoe’s admittedly excellent descriptive writing slows down every moment of the orchestra’s potential death sentence; in some scenes, ‘The General’ seems to be a precursor of Ian McEwan’s precise and formalist style, wherein every moment is considered intrinsically. In others, it presupposes Iain Banks’s ‘A Song of Stone’ in its quixotic and melancholy approach to its subject matter.
It’s the first of a couple of oddities in Sillitoe’s bibliography, but demonstrates that he was a writer unafraid to test himself, experiment, push back the boundaries and side-step the easy categorisation that many critics would rather he be slotted into. It would be ten years later, with ‘Travels in Nihilon’, that Sillitoe wrote a novel as boldly experiment and critically baffling as ‘The General’.
Posted by Neil Fulwood at 7:05 PM