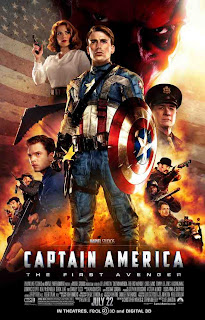 In 1991, ‘The Rocketeer’ opened to lacklustre box office. I’ve never understood the indifference; it was a fun, briskly paced WWII-set superhero movie with gorgeous art deco stylings and an even more gorgeous leading lady in the form of Jennifer Connelly.

Twenty years later and director Joe Johnston is spectacularly vindicated as he knocks it out of the park with the best Marvel Studios production yet – ‘Captain America: The First Avenger’, a fun, briskly paced WWII-set superhero movie with gorgeous art deco stylings and an even more gorgeous leading lady in the form of Hayley Atwell.

Factoring in Emily Blunt in last year’s ‘Wolf Man’ remake, there’s probably an academic paper to be written on the role of the smokin’ hot brunette in the films of Joe Johnston, and ordinarily I’d say that I was the guy to write it, but I don’t fancy sleeping on the sofa tonight so let’s move swiftly on.

Apart from a couple of dodgy bits of CGI – just a couple, mind – ‘Captain America’ is pretty much note-perfect all the way through. The key to its success is that Johnston gives the whole thing a nice old-fashioned vibe. Not just in the period recreation, but in his directorial style. Thus an action movie that’s character-driven. An action movie where the camera is held still and the editing doesn’t resemble the work of an epileptic barber – in other words, an action movie that lets you see the action. In an age of shaky-cam and bpm-editing that reduces major set-pieces in movie after movie to an impressionistic blur, this is something to be applauded.

Johnston’s cast is bob on, as well. Kudos to Chris Evans for playing Steve Rogers straight – not even the vaguest hint remains of his smug dickwad turn in the execrable ‘Fantastic Four’ movies, nor does he make the mistake of playing Steve/the Cap as too staunch and all-American. This movie could easily have drowned in jingoistic syrup. Johnston and Evans avoid the pitfalls and deliver the goods. Or should I say, Johnston and Evans and the supporting cast. 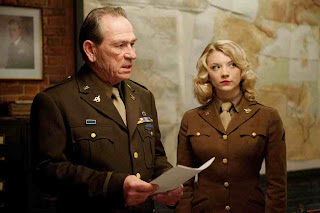 ‘Captain America’ pulsates with great supporting turns. Tommy Lee Jones is back on form plus VAT as the grouchy Colonel Phillips. I can’t think of another actor who could deliver a line like “you and me are gonna have a conversation that you will not enjoy” with such relish. Hugo Weaving gets a “man of the match” award as Johann Schmidt/Red Skull (a Nazi so demonically evil even Hitler doesn’t want him on the team award). His Werner Herzog-style accent is just brilliant, and his sneering (yet beautifully subtle) ‘Raiders of the Lost Ark’ reference near the start is priceless.

Stanley Tucci and Toby Jones have great fun doing two contrasting versions of the Eccentric Scientist archetype. Dominic Cooper nicely reverse engineers Robert Downey Jnr’s performance as Howard (father of Tony) Stark. And Hayley Atwell … from her first scene where she proves a point by slugging a guy twice her size, to her various scenes packing heat and exchanging fire along with the guys, to the could-have-lachrymose but actually quite poignant conclusion to her character arc (gently referencing ‘A Matter of Life and Death’), she’s absolutely one of the best things about this movie and if everyone in Hollywood isn’t lining up right now to offer her leading roles then something’s amiss. 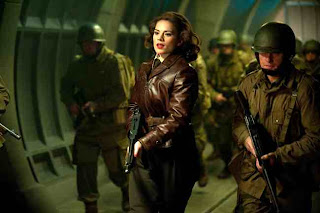 Speaking of movie references, the nods to ‘Raiders’ and ‘AMOLAD’ are augmented by homages to ‘Once Upon a Time in America’ and at least two Bond movies. Elsewhere, Johnston’s attention to detail and playful sense of humour is evident: a group of kids read issue one of the original magazine; the hood ornament on the villain’s Mercedes replaces the three-pointed star with a death’s head; a countdown to self-destruction clicks over on a flap display. Even the most outlandish technology on display keys in to a convincing 1940s aesthetic.

The subplot whereby Rogers is pressed into a war bonds fundraising campaign kits him out in a laughable first incarnation of the Captain America costume – a stroke of genius by the filmmakers as it allows us to legitimately laugh at how ridiculous he looks. When Version 2.0 of the costume is introduced, authentically weathered and buffed up and looking the business, it just comes across as all the more cool as a result.

Just as the film itself comes across as a highpoint in the Marvel canon. Joss Whedon’s ‘The Avengers’ suddenly has a hell of a lot to live up to.

'An impressionistic blur'. Well said as it has been my constant gripe all year with this bombardmanet of CGI heavy movies. They just blur into one another to the point where you can't distinguish one from the other. For me this is why the last Harry Potter fell flat. Where were the actors among all the wizz banging??.
This is why I like CA so much as it holds a rein on the cGI, and has real characters and set pieces. It was a breath of fresh air for me, and why I consider it the best super hero movie of the year.
I really can't understand why Atwell isn't getting the roles. I mean she has been around a while now. Maybe she has a crap agent or isn't actively seeking work. She is an actress I want to see more of, as I believe she has the goods to become one of the best of our era.

Speaking of references, didja spot the obvious nod to RETURN OF THE JEDI during one of the climactic chase scenes? Very nice.

I thoroughly enjoyed this film and it helped that I had low expectations going in (as a lot of people did, I think) but Johnston and co. hit it out of the park.

I was blown away by this one as well, I loved everything about it, didnt find anything wrong with it really. I too am a fan of The Rocketeer and I am so glad that finally, a film that takes place during this time period is making some bank! At least it didnt go the way of The Shadow, The Rocketeer and The Phantom, all comic book period movies that flopped in spite of being decent flicks.

Wow, did they get the Red Skull perfectly or what?! Great review my friend! ANd your right about Johnston choosing the most bodacious babes for his films, Im getting glimpses of Jennifer Connelly on The Rocketeer, wow was she smoking hot beautiful on that movie!

I'm really excited to see this Neil, everything you said here is pretty much bang on what I was hoping for from Cap. Big fan of the Rocketeer too, Jennifer Connelly truly was hotter than the sun!