GIALLO SUNDAY: A Blade in the Dark 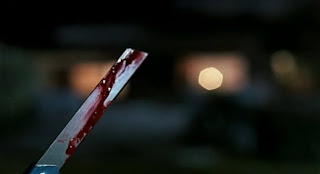 Until I watched Lamberto Bava’s ‘A Blade in the Dark’, my favourite line of dialogue in a giallo was a straight toss-up between “Right, send in the perverts” (‘The Bird with the Crystal Plumage’) and “I killed them because they were dolls, just stupid dolls” (‘Torso’).

I now have not one but two lines of dialogue – from the same film – that challenge these. The first, during an argument between film score composer Bruno (Andrea Occhipinti) and his actress girlfriend Julia (Lara Naszinsky), is apropos of her obsession with sun-bathing: “Is it possible you’re such a vacant nerd?” Bruno snaps. “Your satisfaction is to sit like a frog in the sun.”

Calling your g/f a nerd and likening her to a frog in the same breath – way to go, Bruno, you silver tongued devil, you. 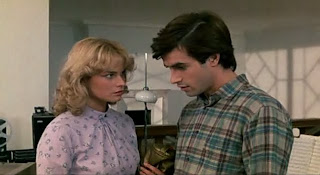 The second concerns the murderer’s psychopathology. Now, I watched a lot of gialli – and I’ll happily admit that there’s still a good number of titles I have yet to acquaint myself with – and the motivations for a genre’s worth of black-gloved psychopaths are manifold: childhood traumas, botched abortions, inheritances, schoolgirl prostitution rings, sexual hang-ups, religious mania, property deals, inconvenient spouses and just plain old blood-lust. ‘A Blade in the Dark’ gives us a killer the key to whose psychology is – ready for this – “a morbid fear of tennis balls bouncing in the night”.

Because I don’t know about you, but those nocturnally buoyant tennis balls give me the willies good and proper. The more I think about it, the more I’m at a loss to understand why other filmmakers haven’t picked up on this. (“Are the snooker cues still screaming, Clarice?” “You can take our lives, but you’ll never take … our penalty!”)

Okay, let’s hit pause on the sarcasm and rewind for a plot synopsis. Bruno rents an isolated villa from rich pal Tony (Michele Soavi) so he can have some peace and quiet while he works on the score for a horror film directed by Sandra (Anny Papa). Between visits from the erratic Julia, he is visited by the flighty Katia (Valeria Cavalli) and the seductive Angela (Fabiola Toledo), both of whom have connections to the previous tenant, an individual known only as Linda.

In short order Katia and Angela go missing, Katia’s diary is torn up and burned, and a tape reel on which Bruno hears a voice saying something that seems to connect Linda to the strange events currently unfolding is destroyed. Bruno questions shifty groundsman Giovanni (Stanko Molnar) about the previous tenant, but he’s less than forthcoming. Then Sandra lets its slip that she has a connection to the mysterious Linda. Bruno grows increasingly edgy as events escalate, but without a body to prove that Katia or Angela have been murdered, and his story roundly scorned by Julia, he finds himself with no-one to whom he can turn. 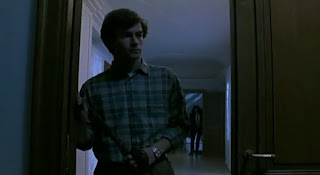 Made in 1983, it harks back to the gialli of the previous decade, particularly Argento’s ‘Deep Red’: musician protagonist, long sequences of said reluctant hero exploring a house that may or may not be deserted, a major clue (visual in ‘Deep Red’; dialogue in ‘A Blade in the Dark’) hidden in plain sight, sexual ambiguity in the last reel revelation. And for the most part it’s a stylish and compelling enough throwback.

However, there’s little investment in the ostensible mystery with Bruno, atypical for a giallo protagonist, neither witnessing an actual murder or getting hung up on an overlooked clue, the importance of which only becomes clear late in the day. Bruno’s tenuous reasons for believing that Katia and Angela have been killed – while explicitly proved to the audience in two extended setpieces – don’t really hold water and make for some awkwardly exposited scenes when he tries to discuss his concerns with Julie, Sandra or Tony.

Katia’s diary, the strange voice on the tape (no explanation for which is ever satisfactorily provided) and the peregrinations of the thuggish Giovanni are herrings of various shades of red, but Bruno never really pursues or discounts any of these angles. There’s an illogicality about ‘A Blade in the Dark’ which – while it’s kind of petty to carp about illogicality in gialli – becomes increasingly notable the longer the film continues. (Subject of which, twenty minutes shorter would have been an ideal length.) 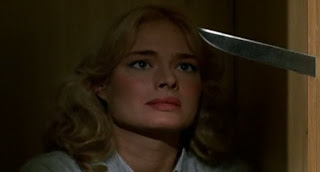 This illogicality is present in scene after scene. It’s there in the discontinuity of Sandra discussing the revelation in the final reel of her film (“wait till you see reel twelve”), a clue which ties in to the killer’s motivation, only for the killer to break into the studio and hack apart the contents of reel ten (“the final reel,” as Sandra’s projectionist breathlessly gasps). It’s there in the ability of the killer to be at Bruno’s villa (described early on in the film as “isolated”) just minutes after vandalizing the film, while it takes Bruno three or four times as long to get back after he realizes that Julia is in danger. It’s there in the scene where Bruno asks Julia to accompany her on an errand and she snubs his company for the pleasures of sunbathing (hence the aforementioned “vacant nerd”/“frog in the sun” diatribe; Bruno’s errand turns out to be a secretive enquiry into Julia’s recent inexplicable behavior … so why invite her along?

‘A Blade in the Dark’ often seems like a collection of cool set-pieces strung together by a patchwork quilt of a narrative that hadn’t been particularly well thought out. Don’t get me wrong, I’ve seen plenty of gialli you can say that about which have been deliriously entertaining. ‘A Blade in the Dark’, for all its technical prowess, doesn’t quite achieve the delirium and grand guignol gratuitousness that defines the top flight examples of the genre.

"This is all the whiskey you possess?"