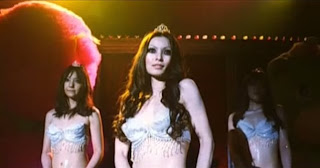 There are films that pull the rug in the first reel. The credits roll, the narrative begins, things get very weird from the outset; the protagonist’s situation seems to be spiralling out of control; imagery and logic twist in upon themselves. Then – bang! – the whole thing’s revealed as a false start. A dream sequence. Or the main character’s imaginings.
Then there are films which bide their time, patiently and subtly fool the audience, then pull off that eleventh hour rug-pull, that head-fuck twist-in-the-tail that forces the audience to re-evaluate everything that’s gone before. Inferior films do this and send you stomping out of the cinema in disgust. Superior ones – case in point, Christopher Nolan’s ‘The Prestige’, leave you itching to watch them again, convinced there are a myriad clues you should be watching out for.
And yet other films blend reality (i.e. their internal reality), fiction (i.e. an admission that what is onscreen is a creation/manipulation) and meta-textuality to such effect that the boundaries become blurred, the narrative planes intertwine and the writer/director is revealed as some kind of prancing Machiavellian sprite, happily pulling the strings (including those of the audience) on any number of levels. 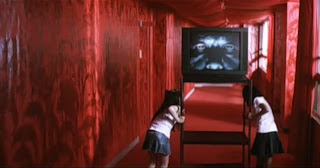 And – more rarely – there are films which tick all of the above boxes. These films are usually by Alain Resnais or David Lynch. Today’s offering, ‘Strange Circus’, is by Shion Sono, and it’s brilliant, accomplished, intellectual and despicably cynical in roughly equal measures.
‘Strange Circus’ starts with a performance by the grand guignol troupe of the title. A young girl is invited on stage to be guillotined. Her voiceover suggests that she was doomed to die the moment she was born. This scene is filmed subjectively, so that the circus-mistress’s implorations for a volunteer are seen from the girl’s point of view. When she reluctantly allows herself to be led onstage, the POV remains: the effect is akin to her stepping out from the audience, through the fourth wall, and into the fabric of the film. It’s the first of Sono’s many distortions of perspective.
The girl is Mitsuko (played by Rie Kunawa and Mai Takahashi are various stages of her girlhood, and Masumi Miyazaki as an adult). As she’s led towards the guillotine, she wakes up screaming. Five minutes in, and we’ve made the transition from dream sequence to narrative proper. Or have we? Awakened, Mitsuko hears violent noises from her parents’ room and investigates. She witnesses her father Gozo (Hiroshi Ohguchi), a headteacher, sexually dominating her mother Sayuri (also Miyazaki). Gozo punishes her by subjecting her to similar treatment. 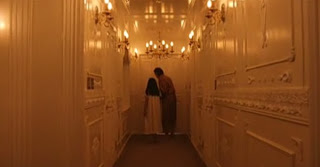 Okay, then. Incestuous paedophilic rape. Still with me? Gozo also forces Mitsuko to watch his sexual domination of Sayuri from the confines of a cello case (I am not making this up), an ordeal Mitsuko gets through by imagining her mother is her place. During the actual incest, Mitsuko copes by imagining she has become her mother. So: throw in voyeurism and troilism on top of the incest/rape business.
Still with me?
Forty minutes in, Sono reveals that everything we’ve just seen is the embryonic plot of a novel by crippled pornographic author Taeko (Miyazaki once more), an elegant eccentric who surrounds herself with admirers and hangers-on. Or is it? And is Taeko genuinely conjuring her tale from the ethereal realms of imagination, or do her venal musings have their roots in reality? 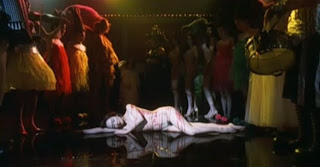 ‘Strange Circus’ – with its taboo subject matter, jarring imagery, and commendably sick sense of humour – is a walk on the cinematic wild side that can only be described as the bastard offspring of Chan-wook Park and Alain Resnais if they’d got loaded on peyote, watched a fuckton of Jean Rollin movies and decided to collaborate on a remake of ‘Whatever Happened to Baby Jane’ by way of the Adrian Lyne version of ‘Lolita’. But without the tact or restraint.
Posted by Neil Fulwood at 9:56 PM