THE SILLITOE PROJECT: Road to Volgograd 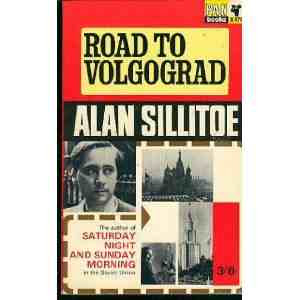 It’s strange how sometimes a work can be overtaken by time. Even when I discovered Alan Sillitoe, as a teenager in the late 80s, ‘Road to Volgograd’ was the Sillitoe title I knew of only by its inclusion in the “also by” section in the other titles I owned.

When, last year, I found a copy on eBay, it was the original Pan paperback with a pre-deciminalization cover price of three shillings and sixpence. It was a 1966 reprinting of a book first published in 1964. Its pages were sepia. It had been printed six years before my birth.

As early as 1939, Winston Churchill (not a popular figure in the Sillitoe canon – see ‘Key to the Door’) said “I cannot forecast to you the action of Russia. It is a riddle, wrapped in a mystery, inside an enigma.” That was pretty much still the post-divided Berlin, post-Berlin Wall, post-Iron Curtain public perception of the Soviet Union in 1964.

1964 – the year after John le Carre published his watershed novel ‘The Spy Who Came in from the Cold’, a bitter and angry response to the erection of the Wall; the year that Ian Fleming died, whose immortal secret agent – if more in the movies than the books – would give the Red menace a good seeing-to. 1964 – a year which started with British motor manufacturer Leyland exporting buses to Cuba in defiance of the US blockade. 1964 – the year that Alan Sillitoe published an account of his travels and observations in the Soviet Union.

Alan Sillitoe (in translation) was one of the USSR’s bestselling authors. In 1963 he was invited to spend a month in Russia. A socialist, a worker himself and – as ‘Key to the Door’ attests – an avowed leftist, he jumped at the chance. ‘Road to Volgograd’ isn’t as gee-whiz as it might have been (Sillitoe was too perceptive, enquiring, cynical and world-weary to have fallen into that trap), but it’s clear – reading the book with the smug benefit of hindsight – that his hosts took pains to steer him clear of the brutal realities of life under the Soviet regime. Later, when Sillitoe discovered these aspects, he spoke out against the totalitarian rule. It’s interesting to note that ‘Road to Volgograd’ found its corollary and corrective, forty-three years later, in his last published work ‘Gadfly in Russia’. Much of his work emerged in pairings – the short story ‘Mimic’ and the novel ‘The Storyteller’; ‘The Lost Flying Boat’ and ‘The German Numbers Woman’; ‘Raw Material’ and ‘A Man of His Time’; the short story ‘The Good Women’ and the novel ‘Her Victory’ – but never have two interconnected works occurred at such chronological odds to each other as ‘Road to Volgograd’ and ‘Gadfly in Russia’.

History and retrospect make ‘Road to Volgograd’ a strange and awkward book – awkward not in its writing (hell no; Sillitoe is on excellent form here) but in the perspective of retrospect. To repeat myself, it’s a work overtaken by time. It faded all too soon from the Sillitoe bibliography and wouldn’t be readdressed until the very end.