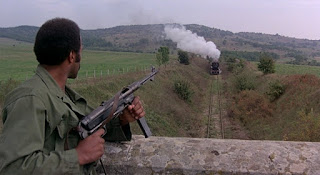 It was probably just as well for Quentin Tarantino that some enterprising distributor decided that Enzo G. Castellari’s ‘Quel Maledetto Treno Blindato’ would clean up in the English-speaking territories if it was retitled ‘Inglorious Bastards’. Somehow, Tarantino’s epic wouldn’t have benefited from borrowing the title ‘That Damned Armoured Train’. For a start, there’s no train in the Tarantino film.

There’s most definitely a train in Castellari’s warsploitation opus. And it’s most definitely armoured. Damned? Given the amount of people who are shot, stabbed or blown up on or around it, that’s pretty much a definite as well. There’s no accusing ‘Quel Maledetto Treno Blindato’ of not delivering on its title.

Although it was made eleven years after ‘The Dirty Dozen’ – a rare example of an Italian exploitation director taking his sweet time in jumping on a bandwagon – Robert Aldrich’s cynical classic is unequivocally the primary source of inspiration in a film that also happily pilfers from John Frankenheimer’s ‘The Train’, John Sturges’s ‘The Great Escape’ and, uh, Umberto Lenzi’s ‘Battle of the Commandos’. 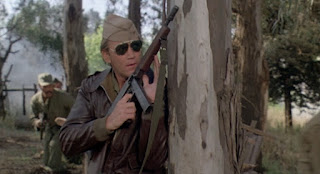 If ‘The Dirty Dozen’ is basically bunch-of-crims-cajoled-into-a-suicide-mission, then ‘Inglorious Bastards’ (I’ll stick with the English title for purposes of this review, though I much prefer ‘Quel Maledetto Treno Blindato’) is bunch-of-deserters-compromised-into-accepted-suicide-mission. How they become compromised, with only a moderate spoiler along the way, is like this:

It’s 1944 in the Ardennes and a truck containing a dozen or so military prisoners leaves an American base under the command of a prissy sergeant played by John Loffredo who’s not important enough to have a name. He’s got a moustache that’s trimmed to within an inch of its life and a side parting you could use as a slide-rule, so let’s call him Sgt Wellgroomed. The truck sets off but a blow-out strands them out in the open and easy pickings for a passing German fighter plane. Sgt Wellgroomed and his fellow guards pile out and take cover, ordering the prisoners to remain in the truck. Some are killed when the fighter strafes them, others when they pile out of the truck and Sgt Wellgroomed opens fire on them. Once the attack is over and a righteously indignant Private Fred Canfield (Fred Williamson) has throttled Sgt Wellgroomed, the numbers have been reduced to five: the aforementioned Canfield, Lt Robert Yeager (Bo Svenson), and three others who, to the best of my recollection, are only outfitted with forenames: wisecracking asshole Tony (Peter Hooten), thief and forger Nick (Michael Pergolani) and the youthful and perpetually terrified Berle (Jackie Basehart). Together, under the nominal leadership of Yaeger, they decide to take their chances crossing Nazi-occupied territory in the direction of the Swiss border. Meeting up with a fellow deserter – if from the opposite side – Adolf Sachs (Raimund Harmstorf), he briefly becomes part of their merry band even if Tony doesn’t trust him. Mind you, Tony doesn’t much like Fred either on account of him being black. So really Tony’s an asshole is what it all comes down to. Anyway, with Adolf tagging along they have various adventures and narrow escapes until a misunderstanding of brobdingnagian proportions results in a firefight with a group of American commandos disguised as Germans en route to a rendezvous with their French Resistance contacts. Net result: dead commandos, extremely pissed off commanding officer Colonel Tom Buckner (Ian Bannen), and a Resistance cell still in need of assistance to accomplish one of those archetypal could-change-the-course-of-the-war missions.

Said mission involves a train. An armoured one. 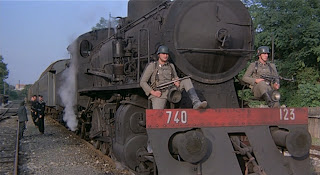 Which is where we came in.

Enzo G. Castellari is one of the minor poets of trash cinema (his second division giallo ‘Cold Eyes of Fear’ has already been part of the Winter of Discontent); by the time he directed ‘Inglorious Bastards’, had chalked up spaghetti western classic ‘Keoma: The Violent Breed’ (another title that’s more than justified by the content) and the cracking crime thriller ‘The Heroin Busters’. Later, he’d helm the ‘Bronx Warriors’ trilogy, a mash-up of John Carpenter’s ‘Escape from New York’ and the expected tropes of the post-apocalypse subgenre that became its own epic saga. Castellari knows what makes genre cinema work: pace, story and incident. Plenty of it.

Barely ten minutes goes by without an explosion, an exchange of gunfire or a hair’s breadth escape. Exposition is slotted in as and when. There’s a hint of character dynamics, but not so much that it would slow things down. Castellari keeps the pedal to the metal – or, this being a movie prominently featuring a train, the firebox stoked and the regulator wide open – and gives the B-movie audience what they want: dangerous guys armed to the teeth cutting a swathe through the Hun, a perilous mission with no guarantee of survival and a token scene of nudity just so no-one can complain that the flick didn’t tick all of the boxes. 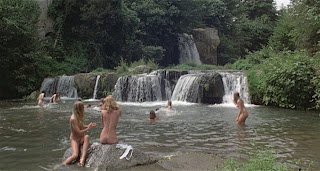 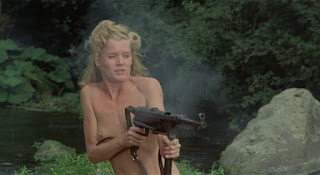 ‘Inglorious Bastards’ gives us a terrific action movie cast (seriously, when Bo Svenson and Fred Williamson get tooled up you just know it’s know it’s going to be spent cartridges a-go-go) with the unexpected inclusion of Bannen giving things a bit of class. But only a bit, mind. ‘Inglorious Bastards’ doesn’t want to be an actor’s movie; it just wants to entertain you. And it certainly fulfils its remit. You’ll cheer through your beer and popcorn when that model railway blows up at the end.
Posted by Neil Fulwood at 11:14 PM