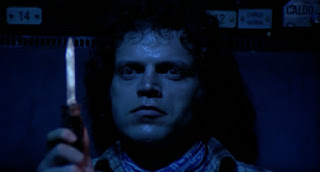 I’d been told that Aldo Lado’s ‘Late Night Trains’ was a pretty damn nasty movie. I’d been told it was ugly, brutal, squalid and cynical. That it was cold, hard and unflinching. That it made for uneasy viewing. That I’d come away from it feeling battered and soiled. And I’m glad I was given those warnings. But I didn’t realize how truly sickening its most horrible, most repulsive moment would be: four entire minutes in which my sense of aesthetics was viciously and incessantly abused. I refer, of course, to the opening credits sequence which plays out to Demis Roussos singing ‘A Flower is All You Need’.

It’s one thing making a rape/revenge exploitation which lifts set-pieces and plot points wholesale from ‘Last House on the Left’ (which itself happily rips off Ingmar Bergman’s ‘The Virgin Spring’); it’s quite another to assault the viewer with the tonsil-quivering falsetto of Demis fuckin’ Roussos. I call everyone involved a sick bastard of the highest order.

Of course, it’s easy to see what Lado’s up to in his use of ‘A Flower is All You Need’. It provides, at first, a mawkish accompaniment to scenes of shoppers making their purchases at a German Christmas market. And not a chintzy false one like we have in Nottingham every year. This is the real deal, since the film opens in Germany. During this montage we catch our first glimpse of our soon-to-be-very-beleaguered heroines Margaret (Irene Miracle) and Lisa (Laura D’Angelo), as well as a rather aloof middle-class blonde woman, who gets no appellation, in the film itself or the end credits, beyond The Lady on the Train (Macha Meril). We also get introduced to Blackie (Flavio Bucci) – so called for the colour of his hair – and Curly (Gianfranco Di Grassi) – also monikered for follicle-inspired reasons – who, it is swiftly revealed, are a pair of unlikeable thugs. Their first act? Beating up a stallholder dressed as Santa for a few lousy coins. Their second? Taking a knife to a rich woman’s fur coat. It’s at this point that Demis fuckin’ Rossous’s wailings cease being mawkish accompaniment and instead get pressganged into ironic counterpoint duties. 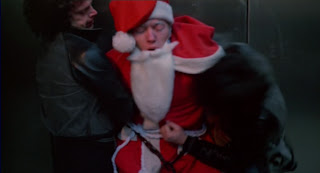 It’s from the fur-coated slicing incident that Blackie and Curly, pursued by the authorities, flee into a station and jump on a train just as it’s pulling out. The same train, as if none of us saw this one coming, that Margaret and Lisa are travelling on. They’re going to Verona to spend Christmas with Lisa’s well-to-do father, Professor Guilio Stradi (Enrico Maria Salerno), a consultant at a metropolitan hospital), and step-mother Laura (Marina Berti). Once onboard, Blackie encounters The Lady on the Train (hereafter TLotT), promptly sexually assaulting her. She responds to the rough treatment and is soon manipulating Blackie and Curly as they menace and inevitably assault the two girls.

Actually, scratch that; the word “soon” has no business in that last sentence. ‘Late Night Trains’ boasts the slowest first half in the history of exploitation cinema. There are endless vignettes sketching in the other passengers on the train – including a delegation from the Catholic church, and a compartment full of ex-Nazis – the end result being that the train is so overcrowded that Lado and his four screenwriters contrive to have Margaret and Lisa, Blackie and Curly, and TLotT change trains (this second one, by contrast, is almost deserted) just so the nasty stuff can take place without interruption. Also during these long, narratively encumbered 40 minutes or so, we’re treated to one of the least realistic operations ever performed on film (it basically consists of Stradi slicing into a piece of foam rubber while saying, more or less, “Scalpel … swab … keep swabbing … okay, we done”); Stradi talking about society’s problems during a hoity-toity dinner party and identifying himself as a peace-loving liberal; and Margaret and Lisa endlessly giggling about boys, the former having done the deed with a spotty fellow student while Lisa remains uninitiated into the global cult of snu-snu.

These moments are so unsubtle that Lado might as well have got the writers to stand in background holding up placards reading “HE’S A DOCTOR, THAT MEANS HE’S SWORN TO PROTECT LIFE, BUT LET’S SEE HOW LONG THAT LASTS WHEN HIS DAUGHTER GETS VIOLATED AND KILLED … IRONY, HUH?” and “SHE’S A VIRGIN. LIKE ‘THE VIRGIN SPRING’. DO YOU SEE WHAT WE DID THERE?” On the subject of the multiplicity of contributors to the screenplay, I’m not sure what depresses me the most – the fact that it took four people to rip off ‘Last House on the Left’, or that anyone wanted to rip off ‘Last House on the Left’ in the first place. 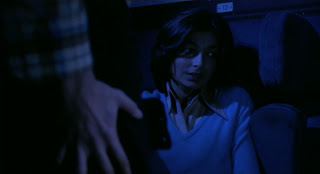 Lado ups the ante during the protracted middle section, though. The manipulation of lower class Blackie and Curly (muscle; no brains) by middle-class TLotT (elegant, seductive; amoral) contrasts effectively with the opulent but empty Christmas celebrations hosted by Stradi and his trophy girlfriend (tellingly, Guilio and Laura are on the precipice of a relationship-destroying argument when their guests arrive and things settle back into a brittle status quo). There’s a conceptually horrible and utterly unexpected payoff to the Blackie and Curly/Margaret and Lisa dynamic, and Lado conjures a shot of a corpse being hurled off a railway bridge that somehow achieves a weird visual poetry.

So: from dull as ditchwater to brutally effective … only for things to go south in the finale. This, folks, is the section in which the scripters might as well have turned up with another placard, this one reading “È L’ULTIMA CASA A SINISTRA … MA CON UN TRENO DEL CAZZO, VA BENE?” For this is, indeed, ‘The Last House on the Left’ … but with a fucking train, all right?

Trundling as I am towards the 1,000 word mark, I won’t belabour the suspension-of-disbelief-severing circumstances that land the killers at chez Stradi, or the unrealistic means by which relatives receive the bad news (because, yeah, you’d hear the victim’s name on the radio before the police had even commenced an investigation), or the utterly pointless scene, on Christmas morning, where a witness makes an anonymous tip off from a petrol station at which a truck driver is filling up. (Where the fuck is a truck driver delivering to on Christmas morning? Does Santa subcontract on the continent?) Suffice it to say that the last twenty minutes steer unambiguously into distraught-(formerly-peace-loving)-relatives-go-apeshit territory. 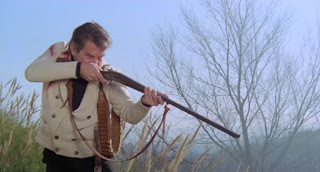 It’s to the detriment of ‘Late Night Trains’ that Lado and co. draw so slavishly on ‘Last House on the Left’. With its attempt at a genuine social commentary (class differences and exploitation), and its unsubtle but effective shifts between the girls’ ordeal on the train and the facile artifice of Christmas at the Stradis’, Lado’s film is certainly a more effective outing than Craven’s notorious-but-actually-not-very-good shocker. Wasn’t it Stephen King who described the film as “Abbott and Costello meet the rapists”? ‘Late Night Trains’ wants to be a much better film, wants to instigate social, political and ideological debate. But it homages, evokes and outright copies an inferior piece of work in frame after frame to the point where you wish it had simply done its own thing with the material.

‘Late Night Trains’, frustratingly, could have been so much more. More focused, more intelligent, more provocative. Nastier.
Posted by Neil Fulwood at 10:48 PM

I couldn't agree more, duder. This movie could indeed have been so much more. After sitting through the atrocities committed by the main characters, I was horribly let down by the revenge at the end of the film. Instead of pulling out all the stops, I think the director tried to be clever and blew it. The one duder with the fro getting stabbed in the crotch was fitting but the rest of it... Meh. Also, watching this with my wife was a bad idea. She still brings this up (after like 6 years) as the worst film we've ever watched together.

Think I made the right decision watching this on an evening Mrs F was out.