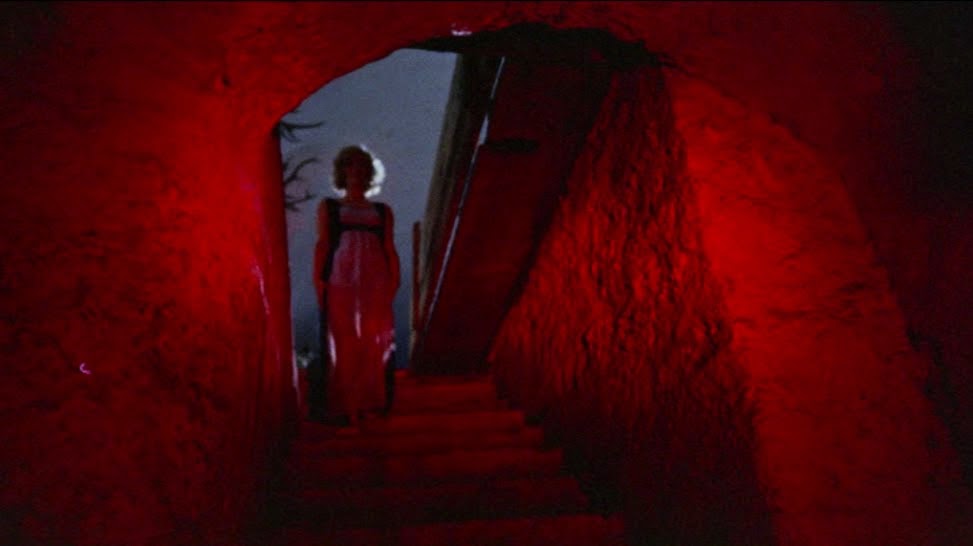 Before we get bogged down by such trifling considerations as plot, characterisation and aesthetics, let’s score ‘Vampire Ecstasy’ on the exploitation-o-meter. For those unfamiliar with this intricate mathematical matrix – i.e. everyone reading this, since I’ve just made it up – it works out a film’s exploitation quotient based on its title, subject matter, the track record of its director and cast, grading it against reasonable audience expectation to arrive at a score out of ten where one is basically your average BBC1 Jane Austen adaptation, and ten is something you really ought to be ashamed of yourself for watching.

‘Vampire Ecstasy’ also goes by the titles ‘The Devil’s Plaything’, ‘The Veil of Blood’ and ‘Curse of the Black Sisters’ (which makes it sound like a blaxploitation hybrid where there isn’t a single face on screen that’s not whiter than something very white that just graduated from the Academy of Pallid). But let’s just stick with ‘Vampire Ecstasy’ because that suggests – neatly seguing into both the subject matter and audience expectation parts of the equation – vampirism and eroticism. Moving swiftly on … 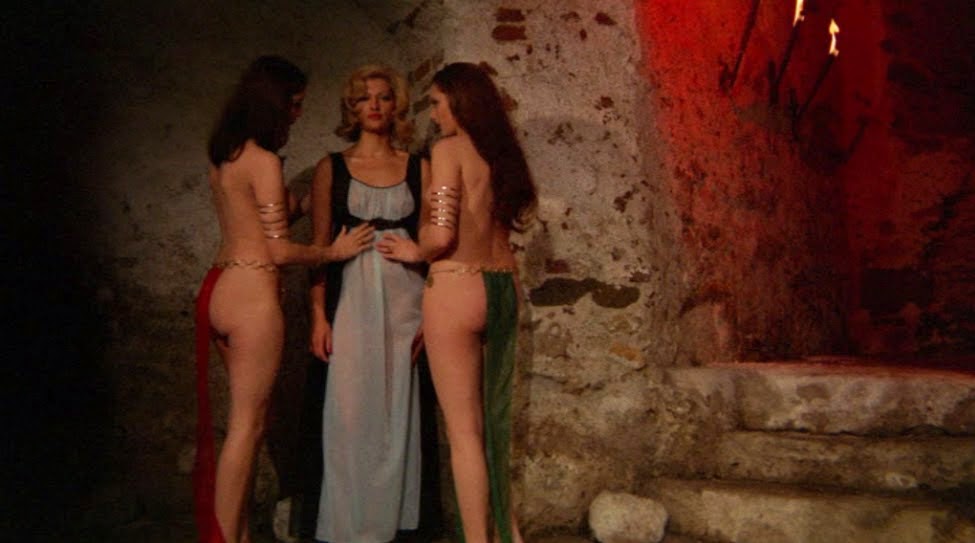 The film was directed by Joe Sarno, who only ever made sex flicks. Seriously, the dude has 122 credits as director according to IMDb, from 1961 to 2004. These include early works ‘Lash of Lust’ and ‘Sin, You Sinners’ (gotta love alliteration), onanism classics ‘The Seduction of Inga’, ‘Abigail Lesley is Back in Town’ and ‘Laura’s Toys’, and late-in-the-game quickies, notable only for their punning titles, ‘Panting at the Opera’ and ‘Screw the Right Thing’.

‘Vampire Ecstasy’ stars Marie Forsa (‘Confessions of a Sex Kitten’, ‘Flossie’, ‘Justine and Juliette’, ‘Broken Butterfly’), Ulrike Butz (‘Sex at the Olympics’, ‘Secrets of Sweet Sixteen’, ‘Confessions of a Teenage Virgin’ … though what a virgin has to confess I’m not sure), Flavia Keyt (‘Deep End’, ‘Hungry for Sex’, ‘Practice Makes Perfect’) and Claudia Fielers (‘White Slavers’, ‘Emanuelle Meets the Wife Swappers’, ‘Swedish Playgirls’). Let’s face it, no-one attended the audition under the impression that they were making a serious drama. 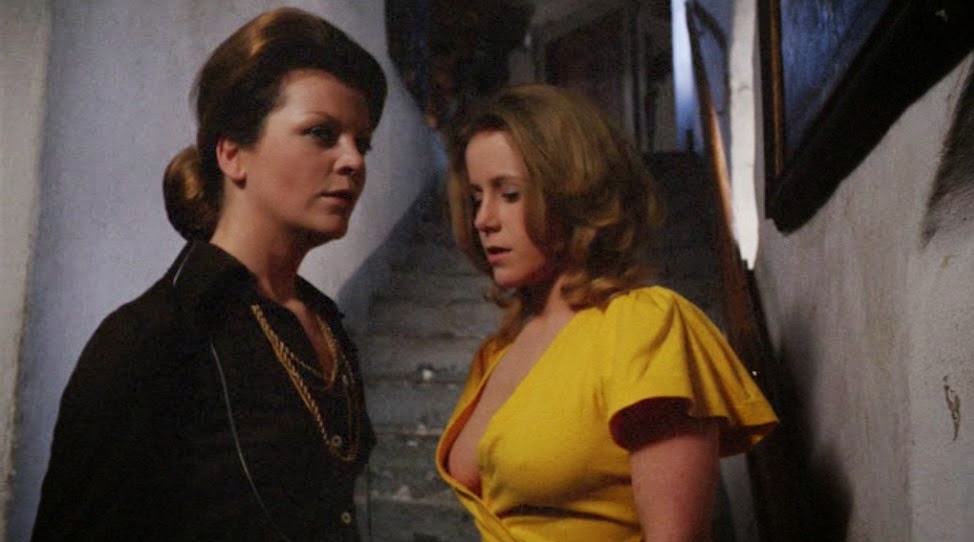 Feeding all of this into the computer, we get a resounding 10 on the exploitation-o-meter. Now let’s go into a little more detail as regards how we got there. ‘Vampire Ecstasy’ opens with nearly ten minutes of a blood ritual which also includes copious quantities of nudity, girl-girl fondling and a dildo roughly the same size and shape as a lava lamp. The ringleader of this cold-shower-inducing business is Wanda (Nadia Henkowa, the closest the film has to a proper actor); her acolytes include the aforementioned Fielers, a popular adult performer in Germany in the 1970s who committed suicide at just 23. 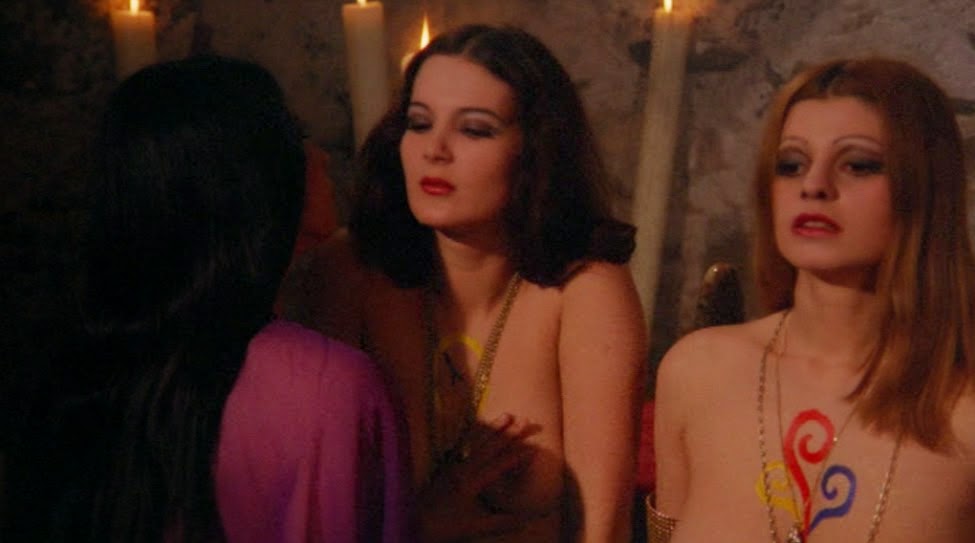 The next scenes actually feature clothed performers: sisters Monika (Butz) and Helga (Forsa) arrive at the creepy Bavarian castle at which, it is revealed, Wanda is ostensibly the housekeeper. They are accompanied by Helga’s friend and lover Iris (Keyt), who very quickly transfers her Sapphic affections to Monika. (Need I point out the ‘Vampire Ecstasy’ is somewhat regressive in terms of its sexual politics?) Monika and Helga have been drawn to the castle by the promise of a lucrative inheritance. No sooner are they installed, than Dr Julia Malenkow (Anke Syring) and her brother and research assistance Peter (Nico Wolf) seek shelter at the castle following a car accident. They turn up in the middle of a storm without a single piece of luggage and yet Julia sports half a dozen different outfits during the 72 hours that the film’s timeline covers. But then again this is a film in which a doctor checks someone’s heartbeat by listened to the right side of their chest so, y’know, fuck accuracy.

Anyhows, what it all boils down to is that long ago there was a sexy as all hell female vampire who was burned at the stake by a crowd of vengeful villagers who were too thick to pound a stake through her heart first. Wanda is the leader of a cult who have just been waiting for a blood descendant of said female vampire to act as the vessel for their mistress’s soul and – bit of a longshot, this – a descendant of one of the torch-wielding villagers to act as victim. 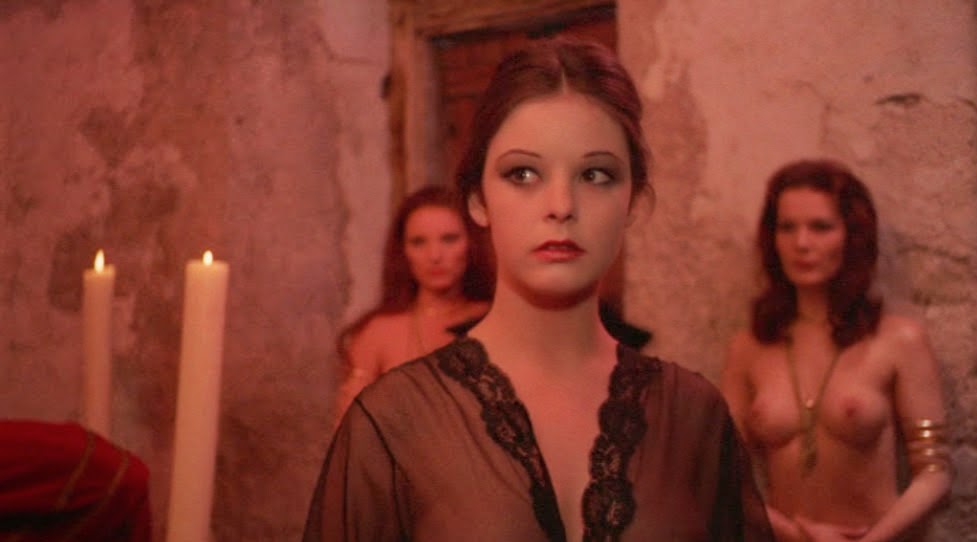 Well, whaddaya know? It’s only the doe-eyed Monika (the unfortunately named Butz looks, at one and the same time, like butter wouldn’t melt in her mouth and priests would kick holes in stained glass windows just to hold a door open for her) who turns out to be vampire chick version 2.0). And as for the descendant of one of the lynch mob … no, surely not? Not Dr Julia, who’s currently working on a thesis on folklore and the supernatural and who haemorrhages exposition at a wink from her director. Actually, folks, yes: the very same. Julia, whom Monika wants to see haemorrhage something else entirely.

How the mechanics of the plot works out is thus: Wanda and co. conduct nocturnal sex rituals to the accompaniment of interminable bongo music. The bongos drive the castle’s visitors to distraction – at first, I thought, because they were so fucking annoying – but it turns out that bongos act like aural pheromones and the next thing you know Helga is nakedly offering herself to the cult. The cult then use Helga to seduce Peter in order to undermine Julia. Julia meanwhile has any number of tense conversations with Wanda and brandishes a crucifix made of garlic (for all its multiplicity of alternative titles, Sarno missed a trick not calling it ‘Cross of Garlic’) whenever she feels threatened (i.e. most of the second half¬ of the film). Iris is next to find herself under the influence of Wanda. Monika holds out briefly but is increasingly drawn to a portrait of her vampiric predecessor. When she eventually turns, the results are spectacular and pretty soon it’s only Dr Julia who’s holding out against numerically superior and sexually provocative numbers. And Wanda is holding a cynical card: she’s divined the improper relationship between Julia and her brother and uses it for leverage. 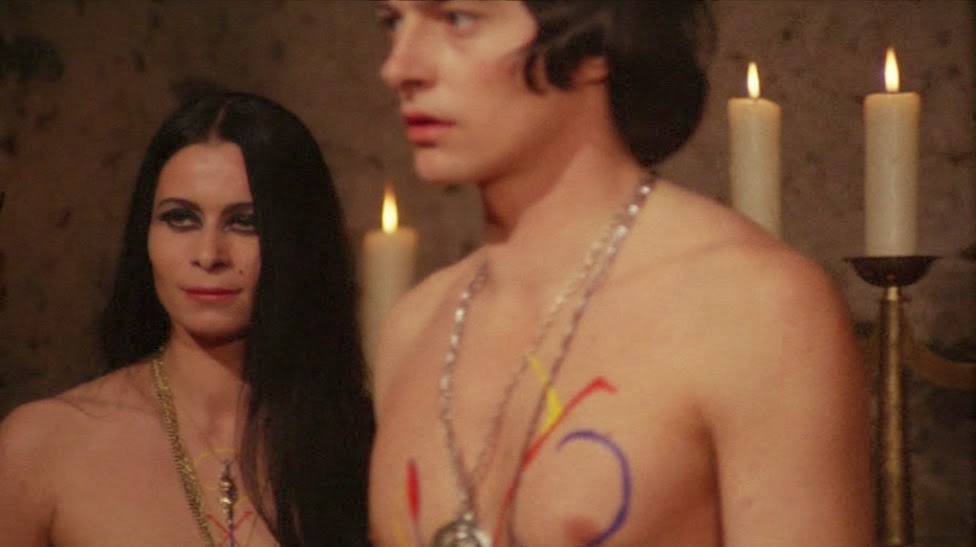 ‘Vampire Ecstasy’ drips with sex. Straight, lesbian, incestuous, sex as ritual, sex as power, sex as death … you name it. Sarno throws in softcore (although he pushes the boundaries more than once) writhings at every possible moment, and never mind plot or characterisation. Peter’s burgeoning relationship with Helga doesn’t so much describe a narrative arc as lurch from being in the same room to making out in the stables. The horses seem rather perturbed. Helga’s transition to the dark side has her inexplicably turn up naked in one the serving girls’ rooms and, oh hell, Sarno just wanted some more girl-girl shenanigans and bollocks to whether any of this made sense.

And one would be forgiven, despite the exploitation-o-meter full marks, to write ‘Vampire Ecstasy’ off as mere hand-shandy fodder. Only it occasionally – occasionally – breaks free of its dirty-mac-brigade target audience and gets a genuinely gothic groove on (I’ll gloss over the ending which demonstrates a total non-understanding of vampire lore) and uses the sultry atmosphere it’s created to good effect. It’s the only Sarno film I’ve seen thus far (though don’t rule out his return later on during this year’s Winter of Discontent) but on this basis I’m not sure why Radley Metzer got the thinking-man’s-pornographer reputation while Sarno has been chiefly remembered as a hack.
Posted by Neil Fulwood at 8:53 PM