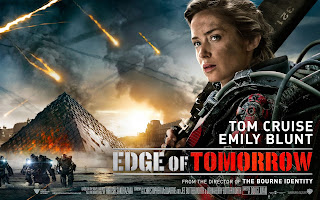 The chief pleasures of ‘Edge of Tomorrow’ are threefold:

1. The sight of Tom Cruise playing a shallow, self-interested yellowbelly (at least during the early stretches of the movie) and necessarily emerging with a far more interesting performance than the central casting man of action that the script obligatorily has him morph into by the end;

2. The sight of Emily Blunt playing a pumped-up kick-ass action heroine for enough of the movie that her character’s nom-de-guerre “Full Metal Bitch” is more than earned;

Note that “best since” should not be considered a synonym for “as good as”. What makes ‘Groundhog Day’ the exemplar of its particular subgenre is that it takes a hard sci-fi concept and yolks it to a romantic comedy narrative that has absolutely nothing to do with the science fiction genre. As with ‘Pleasantville’, it establishes its high concept bit of metaphysical chicanery straightaway and proceeds with such verve, likeability and imaginative energy that the audience don’t stop to ponder whether the suspension of disbelief has actually been earned. This might sound like a statement of the obvious, but consider how laboriously the likes of ‘Source Code’ and ‘Looper’ hammer home their big conceptual raisons d’etre, continually reiterating the rules and spewing exposition left, right and centre.

‘Edge of Tomorrow’ delivers two or three scenes of exposition dump but does so with brio and economy. One moment in particular (the massive suspension of disbelief bit which explains how an alien thingy can reset time) is done with such a sense of “thank fuck for that, we’ve figured it out, now we can go and twat the fucker” that audience response is less likely to be cynicism and mockery than a genuine gung-ho imperative to go kill alien thingies and then celebrate by adorning their collective bedroom walls with a poster of Emily Blunt in a khaki tee-shirt touting a weapon the size of Big Ben.

Speaking of Big Ben, the film is surprisingly set in the UK and Europe (the trailers made it look generically Stateside). A montage of news reports swiftly sets the scene: some unseen menace has been royally fucking up humanity and casualties are off the scale; however, a recent victory in war-ravaged France has (a) suggested a turning of the tide, and (b) made a poster girl of Sgt Rita Vrataski, a.k.a. Full Metal Bitch, a.k.a. the Angel of Verdun. Hold on to that last moniker: we’ll revisit it in a moment.

Into the heart of the London-based command centre comes Major William Cage (Cruise), a former ad man now in charge of military PR: his toothpaste-commercial grin and slick interview technique have helped boost recruitment. When his new commanding officer General Brigham (Brendan Gleeson) orders him to participate in a frontline amphibious assault on the coast of France in order to portray the glorious fight with even greater immediacy, Cage gets the willies and talk his way out of it. When this fails, he tries to blackmail Brigham.

Brigham’s security staff tazer Cage as he tries to make a run for it. He wakes up to the less than tender mercies of Master Sgt Farell (Bill Paxton, earning himself the Agitation of the Mind “man of the match” award for an absolute pearl of a performance that can only be described as what Clint Eastwood’s character in ‘Heartbreak Ridge’ would have been like if Eastwood hadn’t turned up on the first day of shooting and they’d cast Dirk Bogarde instead) who takes no small degree of pleasure in informing Cage that he’s now a member of a suicide squad.

Outfitted in one of those exoskeleton suits that every sci-fi movie between ‘Aliens’ and ‘Avatar’ has drooled over, Cage and his fellow cannon/alien fodder are dropped onto a beach in France. As you’d expect, he buys the farm pretty quickly. Then he wakes up to the less than tender mercies of Master Sgt Farell who … but you’ll have figured out the reset/restart element of the narrative already.

The beach assault is where ‘Edge of Tomorrow’ simultaneously gets its action movie funk on and becomes rather troublesome. The plus points first: it’s one hell of a sustained set-piece, with a good third of the movie concentrating on how Cage assimilates specific life-or-death details in order to progress further than a few yards inland without dying horribly; the effects are spot on; and the first glimpses of the alien thingies are pure nightmare – a sudden explosion of movement, a suggestion of tentacles, and the attack is all over in an impressionistic blur. Actual definition of the creatures, let alone their hierarchy (which becomes a key plot point), is withheld until much later in the proceedings. Also, the means by which Cage’s endlessly relived day take him in different directions – from callous survivalism as he lets his comrades die to a side-mission in which he enlists Vrataski’s help – are effected by the steady accretion of detail without ever seeming repetitive, which is no small feat.

There are, however, problems. The whole Angel of Verdun/allied beachhead aspects set up parallels with the First and Second World Wars so explicit that the film becomes freighted with a subtext it hasn’t earned, doesn’t deserve and can’t possibly hope to justify. In fact, the longer it goes on, with the sci-fi concept milked for all its worth and the character dynamics degenerating into predictability the closer Cage edges to becoming the hero of the day, the more it seems to cheapen its wartime touchstones.

The other problems are the backgrounding of Vrataski in the finale so that Cage can assume centre stage; the ennui of Cruise morphing into a generic tough guy hero when he was so much more fun to watch as a smarmy propagandist crumbling under an industrial-sized dose of his own medicine; and a final reset/restart that isn’t just a mockery of at least one last-reel act of selfless sacrifice but a narrative cheat.

That it’s still a hell of a lot of fun to watch is some testament to what director Doug Liman and his creative team get right. The early stretches give us the most entertaining Cruise performance since ‘Tropic Thunder’, Blunt hasn’t been this engaged with a role for ages, Gleeson is always good value and can I just repeat myself regarding the Bill Paxton “man of the match” award. In a way it’s frustrating that ‘Edge of Tomorrow’ isn’t a stone-cold classic, because the potential was certainly there. But as with Cruise’s earlier sci-fi outing ‘Oblivion’ what emerges is the ghost of a rigorously intelligent genre outing haunting the edges of the mainstream popcorn movie constraints that guaranteed its budget. The irony is that for its cap-doffing to commercialism, ‘Edge of Tomorrow’ did lacklustre business at the box office business. It says something that its DVD cover fixates on the movie’s tagline “Live. Die. Repeat” and consigns its actual title to the tiniest of lettering. Which part of that “Live. Die. Repeat” slogan will come to exemplify its shelf life remains to be seen.
Posted by Neil Fulwood at 11:11 PM