That thing with the guy in the place 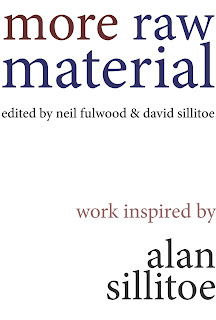 Remember when I relaunched this blog last month (and, uh, yeah, there is some content coming in September, honest), how I mentioned that I’d been busy for much of this year on a fairly big project? Here’s the inside story.

A few years ago, I blagged my way onto a committee that had been set up to honour and the life and work of Nottingham writer Alan Sillitoe (best known for ‘Saturday Night and Sunday Morning’ and ‘The Loneliness of the Long-Distance Runner’). Chaired by Alan’s son David, who provided the photographs for the terrific 1985 travelogue ‘Alan Sillitoe’s Nottinghamshire’, the committee’s aims were twofold:

- Raise funds towards a permanent memorial to Alan, to be cited in Nottingham;

Time passed and we held several events (including film screenings and a benefit concert featuring The Smears and Sleaford Mods) and ran poetry competitions adjudicated by such luminaries as George Szirtes and Helen Ivory. But raising the kind of capital needed for a statue or something of equal prominence wasn’t easy.

In January, David and myself started talking about an anthology. I envisaged it as a 60 page collection of poetry, something that would redress the lack of recognition Alan received for his own verse, something we could sell at events, and something that we could offer as an incentive as part of a proposed crowdfunding platform. David had bigger ideas: a chunky collection of poetry, fiction, memoir, essays, travel writing (i.e. an overview of all the different literary disciplines Alan was capable of), plus photography and artwork.

With the help of poet, occasional Agitation contributor and all-round renaissance woman Viv Apple, we put together a list of people we could approach, from established to up-and-coming writers, and set about asking them for new work without so much as a red cent in payment.

We figured we’d get a positive response rate of about 30%. The actual response was more like 90%.

We figured we’d pull the anthology together and have it to the printers by the end of May. It’s now September.

We learned a hell of a lot about publishing in a very short space of time, and a lot of good people helped us up the gradient of that learning curve.

The result is ‘More Raw Material: work inspired by Alan Sillitoe’ – 52 contributors, including this year’s Keats-Shelley Poetry Prize winner, the lead singer of Sleaford Mods, and writers from the Faber, Bloodaxe, Five Leaves and Nine Arches rosters. Plus some exciting and ridiculously talented up-and-comers.

The anthology is currently being typeset and should go to press very soon. There will be a launch in Nottingham, plus a slate of other events next year. There’ll be a website to support the book, and a “mate’s rate” for Agitation readers. Details to follow.

Obviously, there is still work to be done, and there will be an impact on the regularity of content on Agitation for the remainder of the year. Rest assured, though, that 13 For Halloween and the Winter of Discontent will be going ahead as usual. Wouldn’t be Agitation if we didn’t see out the last few months of the year in a welter of cynicism and depravity!
Posted by Neil Fulwood at 9:12 PM