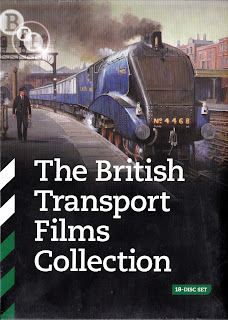 This hefty box set collects 125 railway-related public information films in nine volumes across eighteen DVDs. With the public information film a thing of the past, the set fulfils several roles: a social document for historians, nostalgia for those of an age to remember steam rail, and a 40-hour nerdgasm for transport buffs.

It’s also interesting to look at these films as examples of the filmmakers art, since they were all designed for limited runs at cinemas prior to the main feature. You know, back in the day when you got a newsreel, some cartoons and a B-movie as well as the film you’d actually paid your money to see. Instead of the half hour of flashy, vapid adverts you get now. Particularly for cars and expensive European lager. Fuck lager.

Sorry: I got distracted there. Where were we? Ah, yes: public information films. Interesting, as I say, to look at as examples of the short feature. But not interesting enough that I was going to wade through the entire box set (which I borrowed from my dad under the misapprehension that it contained Basil Wright’s classic ‘Night Mail’. It doesn’t.) I watched a few shorts from volume one, and the results were mixed. 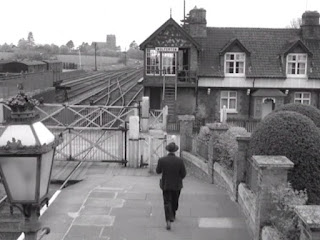 If I couldn’t have the poetry of W.H. Auden and the music of Benjamin Britten (what other public information film boasts such cachet? even the sound director was Alberto Cavalcanti, six years off making the wartime classic ‘Went the Day Well?’), I settled for ‘John Betjeman Goes by Train’ (1962). Full disclosure: I’m not a fan of Betjeman’s work – I find it parochial and often trite. Betjeman as host during a short rail journey (Kings Lynn to Hunstanton – not a route that was ever going to steal the Canadian Pacific’s romanticism) is far more appealing, particularly when he disembarks from the train to deliver a short monologue on station architecture or gently remind the audience that Snettisham is pronounced Snetsham and never mind how it’s spelled. There’s a winsomeness to him and touch of eccentricity. Like a favourite uncle. Unobtrusively directed by Malcolm Freegard (he simply lets Betjeman be himself and makes sure the camera crew get some good location shots), this 10-minuter was a co-production of British Transport Films and the BBC. Betjeman was something of a favourite with BBC audiences, and it’s a shame the corporation didn’t send him on more railway journeys. He was far better company than the oleaginous Michael Portillo is today. 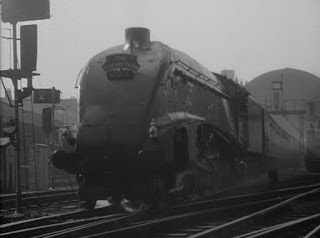 ‘Elizabethan Express’ (1954) also correlates poetry and railways. Here, the film is narrated in rhyming couplets, and two problems immediately emerge: scriptwriter Paul Le Saux was no poet, and narrators Howard Marion-Crawford and Alan Wheatley rattle off the lines with the clipped indifference of Radio Four newsreaders. There’s no nuance or sensitivity to the words, which leaves the piece entirely reliant on its images. Fortunately director Tony Thomson and his three-man camera team capture some evocative black and white footage, particularly in those scenes which document the cramped, sweaty conditions on the footplate – steam rail is only glamorous and nostalgic as long as you’re a passenger. At 20 minutes, though, ‘Elizabethan Express’ is overlong. 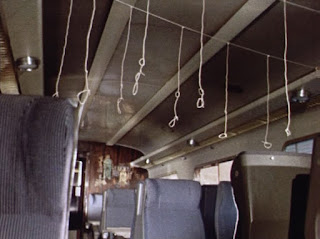 ‘Blue Pullman’ (1962) was the most visually interesting feature I watched. Documenting the implementation of a commuter-specific diesel-electric express from trials through to the first day of regular service, the film opens with a series of wordless tracking shots through empty carriages as the Pullman hurtles at 90mph through the countryside. The camera lingers on various pieces of equipment recording vibration and camber on bends. There’s something almost surreal about the train’s emptiness: it’s like watching a weird conflation of ‘The Lady Vanishes’ and ’28 Days Later’. Things settle into a conventional documentary narrative less than halfway into its 25 minutes (again: too long) as technicians discuss the Pullman’s capabilities and expected performance. Most of the contributors are stilted and obviously nervous in front of the camera. Director James Ritchie seems aware and ensures there are plenty of aerial shots emphasizing the train’s speed and distinctive livery. As with all of these films, I can imagine them being of limited interest to general audiences, but there’s no denying that ‘Blue Pullman’ must have looked damned good on the big screen. 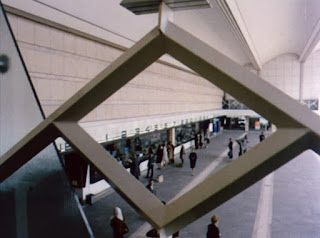 With a title that suggests a Peter Davidson era ‘Doctor Who’ episode, ‘Cybernetica’ (1972) was a commission for the Union Internationale des Chemins de Fer and explores the infrastructure of the European railway system and the computerisation of booking systems. Either subject could have made for a decent 10 minute short, and there was no reason for ‘Cybernetica’ to be anything other than visually impressive. Unfortunately, the execution is bollocksed in every conceivable manner. The shoddily filmed opening sequence is architecture porn of the dullest variety. The smarmy commentary by Michael Aspel (an inexplicably popular talkshow host from the 1970s with all the personality of a toilet roll holder) focuses on “three pretty girls crossing Europe” and Trevor Roe’s camera gets its male gaze on and forgets all about those pesky trains. There are occasional cutaways to whirring, clunking mainframes encased in acres of solid plastic that you realise with a sudden shock of recognition are what computers used to look like; but then Aspel starts drooling over the “ghurls” again. The casual sexism is appalling, and I stuck 10 of its 20 minutes before voting with my feet … or at least my thumb on the remote control. 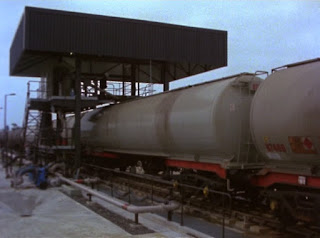 ‘On Track for the Eighties’ (1980) was the last of the shorts that I watched. Opening uncharacterisatically with shots of earth movers and heavy goods vehicles, its swift 15 minutes establish British Rail’s freight operations as part of a larger transport infrastructure including road and sea. Footage of hovercraft dates the film more effectively than any of the fashions or hairstyles on display. In fact there are very little of either. Unlike most of these British Transport Films, the focus isn’t on passengers or the perceived glamour of rail travel, but on industry and modernisation. ‘On Track for the Eighties’ was the last of British Transport Films’ occasional “rail reports” series, but one doesn’t even need to be aware of this elegiac fact to realise that what director John Legard captured here wasn’t simply a slick bit of PR but a picture of an industrially-confident Britain taking its last throw of the dice before the axe of Thatcherism descended.
Posted by Neil Fulwood at 5:11 PM