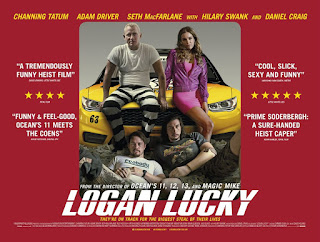 It would be an easy and reductive way to start this review by observing that ‘Logan Lucky’ is the white trash B-side to Steven Soderbergh’s earlier heist movie ‘Ocean’s Eleven’.

Easy. And reductive. And not without a glimmer of truth. It would also be worth noting that ‘Logan Lucky’ enjoys the benefit of being an original piece of work rather than a remake (albeit one that surpasses its Rat Pack source material).

‘Logan Lucky’ is a film of two halves and myriad incidental pleasures. It’s not as taut or as impeccably constructed as ‘Ocean’s Eleven’, but it unfolds with the amiability of a shaggy dog story narrated by a consummate storyteller and it’s just as impressive in its casting. It is, in fact, enough of its own film that I ought to do the decent thing and knock off the ‘Ocean’s Eleven’ comparisons right here and now.

Yeah: let’s do that.

The basic set up of ‘Logan Lucky’ – though there’s a hell of a lot more going on than the merely narrative – is that Jimmy Logan (Channing Tatum), the elder scion of a family not known for having the vaguest hint of good luck shine on them, ropes siblings Clyde (Adam Driver) and Mellie (Riley Keogh) into a speedway robbery, a scheme that also compels him to recruit imprisoned safecracker Joe Bang (Daniel Craig) and his brothers Fish (Jack Quaid) and Sam (Brian Gleeson).

So why does an honest working stiff like Jimmy suddenly want to embrace a life of crime? Well, it’s partly because he’s been laid off from the very construction job that’s given him an intimate knowledge of the layout and financial workings of the speedway; partly because he’s parvenu ex-wife Bobbie-Jo (Katie Holmes) and her car-dealership-owning new husband Moody (David Denman) are about to move to another state, effectively severing Jimmy’s contact with his daughter Sadie (Farrah MacKenzie); and partly because robbing the shit out of a speedway during a NASCAR event is a big fuck you to obnoxious English racing impresario Max Chilblain (Seth MacFarlane), a wanker of the highest order who is first introduced flanked by an entourage and picking a fight with one-armed bartender Clyde. Clyde lost said arm on active service in the US army.

If that very very brief overview - one, I should add, that doesn’t even touch on Sadie’s beauty pageant obsession, Moody’s attempts to chat-up/sell a car to his sort-of sister-in-law, Jimmy’s potential romance with medical outreach worker Sylvia Harrison (Katherine Waterston), or the odd tonal shift in the last third when a heist movie suddenly becomes a police procedural – leaves you thinking that there’s more going on here than just good-ole-boys-rip-off-NASCAR, then you’re thinking as smart as … well, that’d be telling if I let on exactly whom the savviest character in the movie is.

I said earlier that ‘Logan Lucky’ is a shaggy dog story, and that’s certainly what it is first and foremost, as well as being the narrative and intellectual register in which it functions most effectively. But it’s also a study in defeated working class machismo (Jimmy was the high school quarterback destined for glory whose life actually came to nothing; Clyde went into the army in an attempt to live up to his brother’s stature and was left disabled in an explosion); the role that luck plays in how one’s life pans out (the film’s subtlest joke is the repeated denial that the Logans’ luck isn’t really cursed because Mellie’s done all right for herself: she’s a hairdresser); the social divisions created by simple earning potential (for all his business acumen, Moody is a serious trade-down for Bobbie-Jo from Jimmy); the wanton misuse of money (compare the outrageous concession stand prices at the speedway with Sylvia’s rueful commentary on how the outreach programme relies on donations); and the casually dismissive way that corporationism makes, breaks and resets the rules (the speedway management can’t determine exactly how much they lose, but sure seem happy with the insurance payout; Chilblain calls the shots over experienced drivers because his shitty energy drink pays for the race team).

I also said earlier that ‘Logan Lucky’ is a film of two halves: the first is basically a three act progression from Jimmy-gets-pushed-to-breaking-point to Jimmy-plans-the-job-and-puts-together-the-team to Jimmy-and-the-team-pull-off-the-heist, and every minute of it is an unalloyed joy; the second focuses on an FBI hardass Sarah Grayson (Hilary Swank) who tries to make sense of the case’s many weird elements and damn near puts it together. While this section is narratively valid – unlike ‘Ocean’s Eleven’, ‘Logan Lucky’ doesn’t have a Terry Benedict figure against whose oleaginous villainy even vault-cracking and multi-million theft is justified, therefore Grayson’s investigation is the mechanism by which the corporationalist shenanigans which turn victimhood into insurance-funded profit is laid bare – these scenes seem like they’ve wandered in from a different movie, and Swank’s performance seems oddly out of kilter with everyone else’s.

Steven Soderbergh’s always been something of an awkward bugger, never quite cohering to even his staunchest fans’ expectations, and it’s somehow fitting that such a luminary as Swank should emerge as the weakest link in one of his films. That said, everyone else is on form: Tatum and Driver form the best double act I’ve seen in ages (their use of “cauliflower” as a code word for Jimmy’s criminal endeavour is way funnier than it ought to be, particularly in the disgusted tone Driver uses to repeat the word, dragging it out as if it contained four times as many letters); Waterston shines in what’s basically a glorified cameo (her ‘bitch please’ look when Jimmy suggests that Sylvia is “an old lady name” is a joy to behold); Craig has more fun with a role than I’ve seen anywhere else in his filmography; and the Agitation Man of the Match Award is jointly awarded to Dwight Yoacham as a prissy prison governor beleaguered by the most hilarious prison riot ever, and Riley Keogh, who sashays through the film with insouciant cool, all haughty looks and witheringly flippant remarks.

‘Logan Lucky’ is about one degree short of a modern classic but offers so much that it’d be criminal to carp. That it shamelessly rips off ‘Two-Way Stretch’ for its most crucial subplot … aw, hell, I’m in a magnanimous mood. Full pardon granted!
Posted by Neil Fulwood at 11:12 PM