WINTER OF DISCONTENT: Angel of Destruction 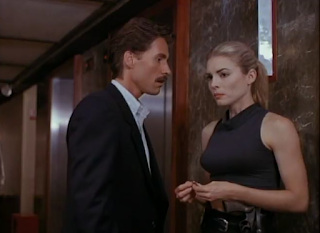 There are certain pleasures to be had from DTV thrillers made in the 80s and 90s. Chief amongst them is their attempt to be all flash and stylish and action-oriented – one can imagine their directors being hooked on ‘Miami Vice’ and ‘Airwolf’ – despite having the production values of a McDonalds commercial and budgets that would probably buy one suit for Don Johnson or two minutes of Jan-Michel Vincent in a helicopter.

Andy Sidaris was pretty much the leading light of this … well, “movement” is too grand a word, so let’s settle for “tendency”. Sidaris was the T&A auteur behind the likes of ‘Malibu Express’, ‘Hard Ticket to Hawaii’ and ‘Savage Beach’, opuses which traded on fast-moving narratives, gunplay, fisticuffs, pneumatic women and glamorous locations, and which still command a cohort of loyal fans despite the fact that they’re basically crap.

But it wasn’t just Sidaris who was happy to kid himself that he was shooting 007-style epics when it was perfectly obvious that the producers simply wanted oodles of nudity from Sibyl Danning or some Playboy pet in her first acting role, and the rest of it was just so much padding to get the running time past the 90 minute mark. Even Jag Mahendra and Fred Olen Ray were churning out wank-fodder as if the style-over-content ratio would guarantee their product a worthier fate than the grindhouse or the top shelf at the video store. And let’s not forget that half-decade or so when Zalman King honest-to-God had a big-screen career. Sidaris, Mahendra, Ray, King: to this roster add Jim Wynorski, Gregory Hippolyte, Charles Band, Albert Pyun, a dozen or so others.

And let us not forget Charles Philip Moore, either. 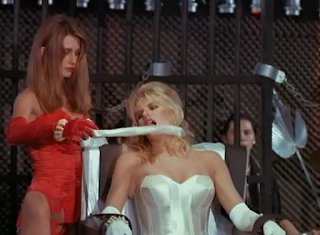 Who? I hear you ask.

He made his debut with the inauspicious monster movie ‘Demon Wind’ before finding his niche, two years later, with the sleaze/murder/topless-gyrations epic ‘Dance with Death’. In fact, 1992 was his annus mirabilis as he also made ‘Blackbelt’, in which chop-socky expert Don Wilson protects provocative singer Deidre Imershein from a nutjob stalker. In many respects, ‘Blackbelt’ is the quintessential Charles Philip Moore film. Well, in one respect actually: he liked it so much he remade it, two years later in his final outing as director.

This being The Agitation of the Mind, where your humble chronicler of all things dodgy is nothing if not idiosyncratic (or, as his father has oft been known to call him, “an awkward bogger”), it won’t be the heights of ‘Blackbelt’ that we consider today, but the somewhat different pleasures of ‘Angel of Destruction’, a title that makes little sense and was probably something of a compromise given that ‘Angel of Vengeance’ was already taken. 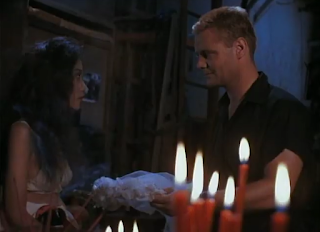 The film opens with ex-special forces type Robert Kell (played with plank-like intensity by Jimmy Broome) taking a hooker to a hotel room; excusing himself that he’s left something in car, he wanders down the hall, invades another room and, unarmed, takes down half a dozen types in suits. He’s aided in his agenda by the fact that at least half of these individuals sit around in easy chairs while he’s happily putting a massive beatdown on their compatriots and only react – and then not very effectively – when it’s their turn to feel the hurt. And what is our bug-eyed hunk of timber’s agenda? Just before he punches the last of his victims through a window – the room is several stories up – he delivers this deathless piece of dialogue: “You left me and my men to die in Angola. I didn’t like that.”

But before we can get into any ‘Punisher’-style narrative of a damaged military man bringing his own personal war back home, Kell wanders back to his room and starts acting all creepy around the hooker. Then we cut to a scene involving another hooker, this one being rescued from a potential gang rape by hard-ass private eye Brit Alwood (Charlie Spradling). Brit takes down the rapists-in-waiting with the same ruthless efficiency that Kell demonstrated against his antagonists, and for a moment ‘Angel of Destruction’ finds itself in a dramatic stasis that whereby two paths seem possible: Kell and Brit as antagonists or Kell and Brit in an uneasy alliance. Either would have been fine by me, as I was happily recalling Spradling’s turn in the Sherilyn Fenn starrer ‘Meridian’ and looking forward to 85 minutes of her in a lead role.

Charles Philip Moore has other plans, however, and this is how things pan out: Kell is revealed in short order – so short that it doesn’t even count as a spoiler to reveal it in this review – as having an unhealthy obsession with raunchy soft-rock singer Delilah (Jessica Mark in her only film role). That’s unhealthy as in breaking into her dressing room and leaving a severed finger as a token of his affection, by the way. Brit is hired as bodyguard by Delilah and her backing singer/dancer/sometime lover Renee (Chanda, whose enigmatic mononym vouchsafed her a film career that included ‘Emmanuelle, Queen of the Galaxy’, ‘Erotic Boundaries’ and ‘Men Cry Bullets’). But no sooner has Brit taken the gig than Kell shows up at her office and (only mild SPOILER) offs her (minor SPOILER ends). 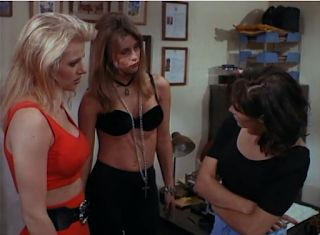 Enter Brit’s younger sister, undercover cop Jo (Maria Ford), and her rumpled ’tec partner (and occasional lover) Aaron (Antonio Bacci). Jo takes up where Brit left off and finds herself plunged into Delilah’s dysfunctional world. Delilah performs a Lita Ford-style brand of soft rock pepped up with the kind of stage show you normally get at the kind of place that boasts a bouncer on the door who used to work for the Krays, a three-drink minimum, and a stage with a pole. Her last two albums bombed and she’s putting up with the demanding ministrations of manager Danny (James Paolelli) – whom she intends to “drop like a greased pig” as soon as her career revivifies – who is himself in a fractious relationship with Sonny (Bob McFarland), a mobster who has sunk $2 million of his paymasters’ money into Delilah’s career and isn’t impressed with the lack of return on investment.

There’s so much going on in ‘Angel of Destruction’ that it’s probably for the best that the main Delilah/Kell/Jo conflict is so streamlined. Between Kell’s obsession with oriental hookers, Jo and Aaron’s patented investigation technique (smack people around till they spill the beans) and Delilah’s stage persona (seriously, she makes The Pretty Reckless’s Taylor Momsen look like Mary fuckin’ Poppins), there’s a shoot-out, hand-to-hand combat bout, or hot chick popping ’em out every five minutes.

There are a lot of criticisms you can level against ‘Angel of Destruction’ – its lousy performances, the trade-down in protagonist from Spradling to Ford, the over-reliance on bland hotel rooms and anonymous corridors as settings, the fight scenes that seem contractually obliged to shoot the coup-de-grace from at least three different angles and repeat one after the other in fetishistic slo-mo – but you sure as hell can’t accuse it of being dull. Oh, and it has an extended scene of Ford kick-boxing a couple of dozen antagonists into a coma whilst sporting nothing more than a g-string. You’re welcome, folks; happy to take one for the team.
Posted by Neil Fulwood at 1:33 PM

According to an article I read in a Femme Fatales magazine issue(during the year this film was released),Charlie Spradling was originally supposed to be the film's lead star but she had such a diva-esque attitude on the set that Charles Phillips Moore decided to bump off her character and replace her with Maria Ford(who was New Concorde Pictures' top star[and the[at-the-time] girlfriend of New Concorde's top filmmaker Dan Golden),with Ford's presence salvaging the film in making it watchable.

Interesting. I didn't know that Spradling had a reputation as a diva. Thanks for commenting.