WINTER OF DISCONTENT: Sisters of Death 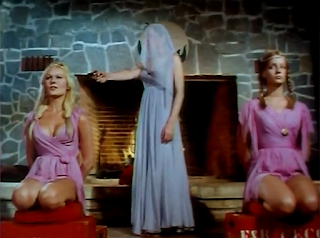 Reviewing ‘Truck Stop Women’ and ‘The Great Texas Dynamite Chase’ in quick succession gave me a yen to search out another Claudia Jennings film. So I cracked a beer, resigned myself to the shitty print quality of an online copy and sat through the hour twenty-seven minutes of ‘Sisters of Death’.

I kind of wish I hadn’t bothered.

As a 70s B-movie that stars Claudia Jennings, Cheri Howell, Sherry Boucher and Sherry Alberoni, you’d have every right to think that sexploitation shenanigans were guaranteed, but there’s not the faintest glimpse of even a nipple. As a horror movie, it’s bloodless, ridiculously contrived, hugely illogical and it fails to deliver any scares. As a single location thriller, it’s devoid of tension and suffers from a uncharismatic antagonist.

But watch the motherfucker I did, and I need to make up the numbers for this year’s Winter of Discontent, so I’m going to gnash my teeth, sling another beer round my gullet and pound out a review anyway. 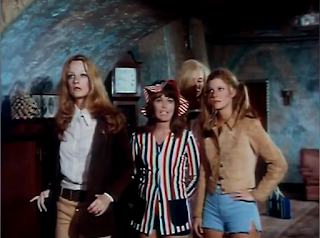 The set-up’s pure simplicity: Judy (Jennings) and Liz (Elizabeth Bergen) are inducted into a sorority via a ritual which involves a test of courage – a blank loaded into a pistol, said firearm aimed the inductee’s head and the trigger pulled. Both participants know that the shells are blanks, so quite how it counts as a test of courage is the first of many things about the film that don’t make a bit of sense.

I’m tempted to say keep your hands in the air if you’re reasonably confident who the final girl is, but we’d be getting ahead of ourselves … 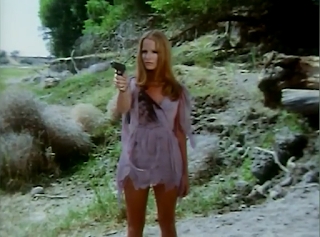 Anyway, all five of the sorority sisters present at the accident are, seven years hence, summoned to a reunion. They are all deeply suspicious and nobody admits to being the individual who organised it; but they all go along anyway. (Facepalm-o-meter score: 1.) They’re met at the rendezvous point by two slimy lover boys who tell them that they’ve been paid to drive them to the venue but they can’t say where it is and they don’t know the identity of the person who engaged them. Judy and her pals take half a millisecond to assimilate the logistics of this well dodgy scenario, then happily pile in the car. (Facepalm-o-meter score: 2.) The back windows of the car are blacked out and the location they’re taken to kept under wraps. One of them is mildly perturbed. (Facepalm-o-meter score: 3.)

The venue turns out to be a rambling hacienda with a swimming pool. There’s no sign of their host and still no indication of why they were brought together. And, as the drivers depart, no means of egress. Plus there’s a fucking big electrified fence around the property. They take a nano-second to assimilate the terrible implications of all this, then throw on swimsuits and have a pool party. (Facepalm-o-meter score: well into the double figures by now.)

Director Joseph A. Mazzuca – in his fourth and final outing as director – shifts gears at this point from unsuspenseful suspense thriller to lowbrow comedy as our oily Romeos decide to sneak back into the compound (managing to do so just before the electrified fence is switched on) and try their luck with the bevy of beauties. Briskly brushed off by the bevy of beauties, they’re beholden to bad luck as the brains behind the business at hand behoves it beneficial to blow the gaff on his identity and motive. (Sorry, I couldn’t think of synonyms for “identity” and “motive” that start with “B”. Which kinds of fucks up the alliterative flow of that sentence. I have failed you, o my readers.)

So, anyways, the big bad behind it all turns out to be Edmond Clybourn (Arthur Franz), Liz’s bereaved and vengeful father. And, y’know, kudos to Mazzuca and scripters Peter Arnold and Elwyn Richards for just coming straight out with it. Trying to string it out to the hour and a half mark before laying Edmond’s (entirely predictable) big reveal on the audience would have been the kiss of death for a movie that doesn’t have much life in it anyway. 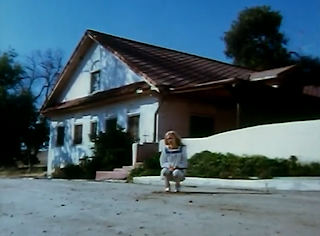 Rolling Edmond onstage forty minutes in and having him give it some “my daughter’s dead and one or more of you wanton harlots is responsible and I’ll have the truth from you tomorrow, so help me God” (not his exact words, but depressingly close enough) creates its own set of problems.

Problem the first: everyone’s confined to the same premises and Team Judy clearly has superior numbers over Team Edmond, their odds favoured by the fact that Edmond has got to sleep at some point, yet it never occurs to anyone to create a distraction (or several distractions), lure him out and jump him.

Problem the second: at least two nights pass without Edmond making his dramatic re-entrance (unless someone dropped a day-for-night shot in the wrong place during editing) and in all this time, with everything in the hacienda at their disposal, nobody posits a useful escape plan (such as, oh I don’t know, unscrewing all the wooden doors from their frames, piling them against the fence until it bows under the weight, then scrambling over on them given that wood doesn’t fucking conduct electricity) Also, Edmond gotta take a nap sometime (see above).

Problem the third: while Edmond’s fucking around making bullets and playing the flute – it’s revealed late in the game that he’s a famous conductor – the sorority sister responsible for Liz’s death starts killing off the others. The script is kind of fuzzy re: motivation here, and in fact the last fifteen minutes or so goes overboard with its bluff/double bluff/triple bluff rug pulls, but I’m guessing the prevailing logic would be: guilty party kills off the others to prevent them from revealing her as the guilty party. Hands up everyone who thinks there might just be an itsy-bitsy teeny-weeny, ickle-wickle flaw in this plan? (That noise you heard was the facepalm-o-meter blowing up.) 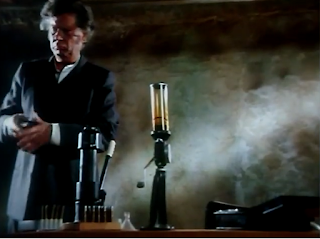 Problem the fourth: would a famous conductor really make his own bullets and cut loose with a gatling gun? Okay, so maybe Karajan would, because once you’ve climbed a mountain, flown a jet, sailed a yacht and recorded complete Beethoven, Brahms and Bruckner symphony cycles for the ages, I guess you’ve got to do something to blow off steam. Okay, and maybe I can see Solti doing it just to clinch that Chicago Symphony Orchestra interview. And maybe Kleiber. Anyone who demands a top-of-the-range Audi as a concert fee probably owns a shooter. But Sir Adrian Boult or Sir Neville Marriner or Sir Mark Elder packing heat? Nah, just can’t see it.

And now I’ve typed that paragraph, I find myself plunging down the rabbit hole of an alternative version of this film in which Edmond is driven to psychotic excess not by the death of his daughter but because conducting symphony orchestras just plain makes you a badass motherfucker. Somebody get Roger Corman on the phone. Does Christian Thielemann have any acting experience?
Posted by Neil Fulwood at 10:16 PM