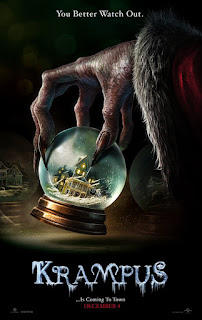 A smidge over an hour into Michael Dougherty’s ‘Krampus’, there’s a dementedly brilliant sequence where a white trash weapons fetishist finds himself pinned down by three anthropomorphic gingerbread men armed with a nail gun, a liberal suburban mom fights off a porcelain angel with a snake tongue, a frumpy much-put-upon housewife goes apeshit at some demonic toys with an axe, and an alcoholic aunt with all the personality of drink-driving accident involving a Mack truck and a school bus cuts loose with a pump-action shotgun.

Let’s rewind an hour plus change. ‘Krampus’ opens with a slow-mo sequence, scored to ‘It’s Beginning to Look a Lot Like Christmas’ wherein a mall opens its doors to a horde of last-minute Christmas shoppers whose sense of festive spirit, joy, peace and goodwill makes your average episode of ‘The Walking Dead’ look like ‘Songs of Praise’ by comparison. Store assistants are trampled, product displays toppled, Santa’s grotto turns into a microcosm of hatred and frustration, and shoppers trade blows.

As the narrative proper opens, this selfsame sense of yuletide pugilism carries over into a school nativity play rapidly descending into chaos as young Max (Emjay Anthony) gets into an onstage scrap with an older lad which is only curtailed, much to the amusement of the other parents, when his father Tom (Adam Scott) drags him away. Tom and his wife Sarah (Toni Colette) are therefore not in the best of moods when they shepherd Max and his sister Beth (Stefania LaVie Owen) back home. Beth’s pissed off anyway that she’s unable to spend Christmas with her boyfriend.

Max, persona non grata in his own home, has only his German immigrant grandmother Omi (Krista Sadler). A woman with a superstitious view of Christmas, she urges him to finish his letter to Santa Claus and feeds him with homemade stolen. Shortly afterwards, the family are descended upon by their boorish in-laws. If Tom and Sarah are the stereotypically affluent and liberal couple, Howard (David Koechner) and Linda (Allison Tolman, who wins Agitation’s woman of the match award for wearing the worst Christmas sweater ever and still being a fucking badass) are every bit as clichéd as the white trash chip-on-the-shoulder oiks with a passel of ill-behaved kids. Including vindictive tomboy Jordan (Queenie Samuel).

When Jordan steals Max’s letter to Santa and humiliates him by reading it over the dinner table (it’s actually quite a sweet letter: he wishes for Christmas to be like it used to be, and his family not to be at each other’s throats), Max ignores Beth’s entreaties not to rise to the bait, brawls with Jordan, and reclaims the letter only to rip it into shreds and throw it out the window. The scraps whirl up into the snowy sky and all hell breaks loose.

A sudden cold snap monkeys with mobile phone signals, takes out the electricity and effectively cuts them off from civilisation. Beth frets over unreturned texts to her boyfriend and insists on walking over to his house. She meets with a bad end en route. We’re about 30 minutes into the film at this part, and the cynical hilarity of the opening sequence has given way to an extended sequence designed to emphasise just how wankerish Howard and his brood are; an extended sequence that needs to pile on the embarrassments and unpleasantries in order to shepherd Max towards his extremely ill-advised decision.

That minutes 5 to 30 of ‘Krampus’ (i.e. damn near a third of it) jettison all traces of humour is a big enough problem in itself. A comedy-horror failing to deliver on the first half of its self-description is on a hiding to nowhere. That those minutes are not only filled with crude cultural stereotyping – but cultural stereotyping that insists the over privileged hygge-obsessed middle class types deserve all of our sympathy and the working class types, who own guns and drive an SUV, deserve none – is an act of aesthetic cuntishness that all but derails the film. It doesn’t help, either, that the one of only two likeable characters – Beth, whom LaVie Owen plays with a winning mixture of sass and sympathy – gets such short shrift so early in the proceedings.

The other likeable character, Omi, is allowed to stick around long enough to deliver an expositional monologue and is then given similarly reductive treatment. Still, her big moment gifts the film with its most interesting stylistic diversion. The flashback that accompanies her explanation of Krampus – the shadow half of St Nicholas, a spirit who punishes instead of rewarding, who takes rather than giving – is rendered as an animation in the vein of Tim Burton’s ‘Corpse Bride’: the time and the place are fudged, but there’s a strong suggestion of wartime and fascism and loss of hope. A lot of weight is carried here, and while it offsets the banality of the first third, it also makes for an uneasy transition into the dark comedy that follows.

It’s an awkward film, is ‘Krampus’. Brilliance and crassness exist cheek by jowl. For every scene that’s utterly hilarious, there are three or four that fail to find a tonal register. The plethora of seasonal archetypes that assemble for the climatic siege are brilliantly realised, but the whole thing is delivered at such breakneck pace that none of them are ever fully developed. An extended coda, which ends on a visually impressive note, strives for a ‘Twilight Zone’ vibe but comes across as ‘Black Mirror’ copyism.

Granted, it’s a better Christmas film than anything that’s been shown at 2pm on BBC2 this year, but it sure as hell ain’t no ‘Calvaire’, ‘Rare Exports’ or ‘Black Christmas’.
Posted by Neil Fulwood at 11:52 PM