WINTER OF DISCONTENT: Puppet on a Chain 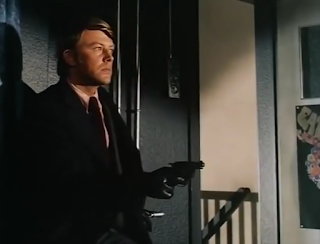 In an otherwise balanced article for The Spectator on the Wilma Montesi murder case*, Alexander Chancellor refers to Piero Piccioni as “a sleazy jazz musician and composer of film music”. I can find little on the internet regarding Piccioni’s alleged sleaziness, apart from the fact that he had a voracious appetite for women (he was, at one point, embroiled in an affair with Alida Valli) and the good life. The son of Attilio Piccioni, a high-ranking member of the post-war Italian Christian Democratic Party, he was a self-taught and prodigiously talented musician whose career as a lawyer was something he bailed on as soon as he hoved into the orbit of Rome’s film community where he carved out a good career writing film scores. Over 300 of them in fact, including ‘The 10th Victim’, ‘The Nun and the Devil’, ‘The Light at the Edge of the World’, ‘Christ Stopped at Eboli’ and the film under consideration today, Geoffrey Reeve’s ‘Puppet on a Chain’.

The reason I bring all of this up is because ‘Puppet on a Chain’ is chiefly remembered – by those who remember it at all – as “the one with the funky Piero Piccioni score and the cracking speedboat chase”. But is there more to it than that? Let’s find out. After, that is, we’ve paused for two minutes and forty-eight seconds to appreciate the Hammond organ driven glory of the opening credits theme. Seriously, I want to own this on vinyl and only ever play it after dark while drinking a martini and wearing a velvet smoking jacket. 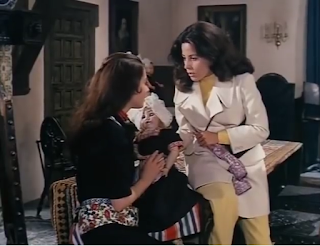 ‘Puppet on a Chain’ is based on a novel by Alistair MacLean, published in 1969. The film was released in 1971M acLean’s fame was at its height: adaptations of his earlier books ‘The Guns of Navarone’, ‘Where Eagles Dare’ and ‘Ice Station Zebra’ had made fucktons of money and he was riding high on an unbroken string of bestsellers that had commenced a decade and a half earlier with ‘HMS Ulysses’. The golden period was all but over, though. From 1973’s ‘The Way to Dusty Death’ to his swansong ‘Santorini’ (1986), the quality control of MacLean’s novels was to become unreliable at best, his slide into alcoholism not helping matters. Almost as if in imitation, the film versions struggled to find favour at the box office, with even solid second-tier adaptations like ‘Fear is the Key’, ‘When Eight Bells Toll’ and ‘Breakheart Pass’ – all of which I’d pick as an evening’s viewing over J. Lee Thompson’s bloated, talky and absurdly overrated take on ‘The Guns of Navarone’ – opening to disinterest if not outright indifference.

MacLean remains ill-served by the big screen. ‘Bear Island’ had a top-flight cast but makes so many deviations from the novel that the creative team could easily have saved themselves the outlay for the rights simply by giving it a different title. ‘Force Ten from Navarone’ also makes significant changes to the novel (a weird decision since MacLean had conceived as more of a sequel to the film of ‘The Guns of Navarone’ than to his original novel). ‘The Golden Rendezvous’ was so fucked-about-with during production that it emerged as borderline incoherent, while the less we say about ‘River of Death’ the better. Particularly galling are ‘Caravan to Vaccares’ – one of my personal faves in the MacLean bibliography – and the soap-opera-ish TV movie ‘The Way to Dusty Death’, both directed by Geoffrey Reeve. That he made such an effective MacLean adaptation with ‘Puppet on a Chain’ yet dropped the ball so badly with the other two** is borderline depressing. 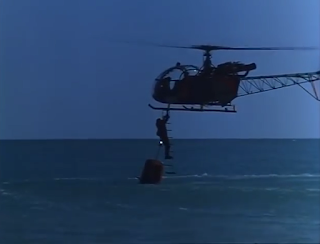 So why does ‘Puppet on a Chain’ hit the spot when Reeve’s other adaptations don’t? I offer three factors:

Item one: MacLean himself wrote the screenplay for ‘Puppet on a Chain’ and therefore the degree of fidelity between book and film was a given. His greatest strength as a novelist was the ability to write cinematically. You don’t just read a MacLean novel: it unspools in your mind, in widescreen, with no expense spared on the special effects. And yet so many MacLean adaptations make the mistake of deviating from the novel. Such deviations as exist between ‘Puppet on a Chain’ in its two iterations – the most significant being the wholesale removal of one character – are there purely to condense the 250 pages of the book into 97-minute film.

Item two: the aforementioned score. Even when the film is at its most visually drab – and for much of the running time it’s as if Jack Hildyard’s cinematography is purposefully trying to avoid local colour in favour of local gloom – Piccioni’s soundtrack brings it exuberantly, vibrantly to life. And here’s an ideal place to pause again, this time to glory in the evocation of an Amsterdam when a groovy 70s swinging club looks like this … 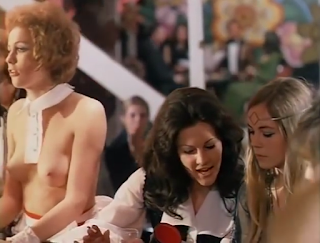 … and you can dally with an anaemic hooker for thirty guilders: 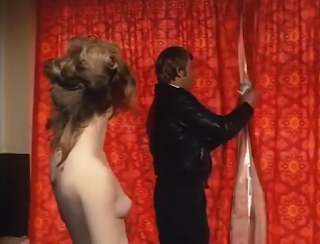 Let us discuss the speedboat chase. The one that isn’t in the novel. The one that damn’ near wasn’t in the film until the producers saw Reeve’s first cut and thought “oh shit, this is an Alistair MacLean thriller and there’s no big action set piece” and got Don Sharp on the blower and asked him if he’d shoot a speedboat chase. Sharp was a veteran director whose credits included Hammer productions ‘The Kiss of the Vampire’ and ‘Rasputin, the Mad Monk’, as well as a couple of Fu Manchu movies that starred Christopher Lee and, for the small screen, episodes of ‘The Avengers’ and ‘The Champions’. He would go on to helm his own MacLean adaptation eight years later with ‘Bear Island’.

The speedboat chase predates that in ‘Live and Let Die’ (indeed, Sharp’s work on ‘Puppet on a Chain’ was said to have inspired it) by two years, ‘Amsterdamned’ by fifteen and ‘The World is Not Enough’ by almost three decades. It’s better than all of them. The speedboat chase is a tense, high-speed, kinetically shot and edited work of jaw-dropping awesomeness; it’s the waterways equivalent of the car chase in ‘Bullitt’ or – more suited to its down-and-dirty immediacy – the car/L-train chase in ‘The French Connection’. 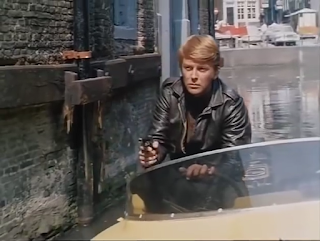 In fact, ‘Puppet on a Chain’ has a certain kinship with Friedkin’s classic (made the same year): not only do both of them fit the précis “loose cannon lawman busts drugs ring whose product emanates from Europe”, but both trudge grimly through the logistic minutiae of moving the stuff, both feature essentially unsympathetic protagonists who are quick to use both gun and fist, both protagonists are rash and hasty in their actions and make mistakes, and both chase scenes end violently. The differences are that ‘The French Connection’ depicts a means of transporting drugs that is almost genius in its simplicity, while the method in ‘Puppet on a Chain’ is ludicrously overcomplicated (including pendulums, Bibles and dolls, submerged consignments retrieved by barges and helicopters and bases, warehouses and production centres on either side of the Zuider Zee); and that Gene Hackman’s performance in the Friedkin classic is the stuff of thespian legend whereas Sven-Bertil Taube in ‘Puppet on a Chain’ stomps moodily around in a leather jacket while exhibiting the dramatic range of a slightly oxidised piece of lead piping.

Elsewhere in the cast, Alexander Knox and Patrick Allen turn up and speak their lines and collect their pay cheque, Barbara Parkins looks ill-at-ease, and only Penny Casdagli seems engaged with actual characterisation. The weirdest and most grotesque scene in the novel – a sort of pre-‘Wicker Man’ scene of ritualism and violence – is re-imagined for the film and doesn’t have anywhere near the same impact. The low key scenes of investigation – following, being followed, incursions into shadowy buildings under the cover of darkness – are handled well and Reeve is certainly adept at maintaining movement and keeping tension on the simmer. Bill Lenny’s editing is focused and unfussy, each scene snapping at the heels of the previous one. 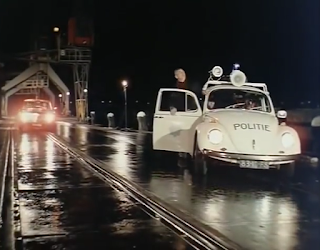 So yes, there’s more to ‘Puppet on a Chain’ than a speedboat chase and a soundtrack that makes me want to drink posh-boy booze and dress like a lounge-lizard, but not to the degree where any other element emerges as memorable or definitive enough to oust either of them from the viewer’s recollection of the film after the end credits roll. In all probability, the only thing you’ll be concentrating on during the end credits is scouring Amazon for the OST. Preferably on vinyl. That, or booking yourself a speedboat lesson.


*In 1953, the body of an attractive but unassuming lower-middle class girl was discovered near the estate of the Marquess Ugo Montagna, an infamous philanderer, the legitimacy of whose title was even in doubt. The haste of the police to close the case and the bewildering and borderline nonsensical cause of death offered by the coroner turned what might otherwise have been a minor news story into a cause célèbre that galvanised Italy. A muck-raking journalist threw all kinds of accusations in Montagna’s direction until litigation forced him to retract. This u-turn effectively pulled the rug from under a prosecution that was all set to go to court. The tragic Montesi’s death remains unsolved, although Stephen Gundle’s book ‘Death and the Dolce Vita’ works through every possible angle and at least offers Montesi a remembrance.

**Alistair MacLean adaptations account for three out of Reeve’s four directorial offerings. The odd one out is ‘Souvenir’ (1989), based on a war novel by David Hughes.
Posted by Neil Fulwood at 9:09 PM

As stated by Stanford Medical, It is in fact the ONLY reason women in this country get to live 10 years more and weigh 42 pounds lighter than us.