WINTER OF DISCONTENT: Humanoids from the Deep 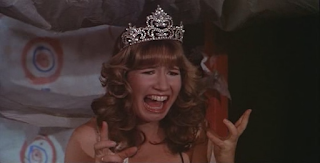 Embittered fisherman Hank (Vic Morrow) is all for the plant, convinced it’s his ticket to easy street, and reacts with naked hostility when Johnny Eagle (Anthony Pena) organises his fellow Native Americans in a class action against the developers, asserting their historical claim to the stretch of river that will be affected once the plant is built.

Meanwhile, skipper Jim Hill (Doug McClure) keeps his own counsel regarding the development – although he has more in common with Hank, he’s sympathetic to Johnny – while accepting a commission to ferry scientist Dr Susan Drake (Ann Turkel) around while she conducts research into the cannery firm’s experiments with salmon-specific growth hormones. 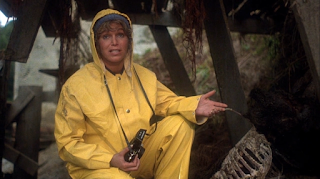 Director Barbara Peeters focuses on the environmentalism vs industry subplot of Frederick James’s screenplay and much of the first half of ‘Humanoids from the Deep’ procedures in dour fashion at a pace that you might call measured if you were being charitable but would probably just shrug and think “screw it” and call it like it is, instead – slow!

Slowly paced narrative or not, Peeters was definitely on her way to doing something with the material, the location and the cast (B-movie stalwarts McClure and Morrow are authentically interested in their characters, and even the congenitally wooden Turkel seems to be striving towards something maybe only two postcodes removed from a performance) and might have emerged with a halfway decent little flick had she focused on the conflict between Hank and Johnny. 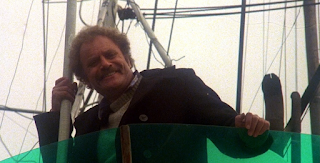 Unfortunately, Hank vs Johnny as a microcosm for contemporary American battleground where corporationism and profit margins set out to ravage nature, culture and heritage is only half of the film. The other half of ‘Humanoids from the Deep’ is about rapist fish monsters.

Yes, you read that correctly.

Now, Peeters knew what she was taking on with the project – she’d helmed a number of low-budget exploitationers already – but her suggestive, cloaked-by-the-shadows approach to the Brett-Kavanaugh-with-gills part of the plot (which could, albeit distastefully, have operated on the level of visual metaphor: big business as a shadowy aggressor) didn’t go over too well with Corman who equated onscreen nudity with ticket sales.

Now, while this kind of sleaze is par for the course in this kind of movie, and none of us approach a film like ‘Humanoids from the Deep’ (hell, even the title tells us to leave our sensibilities at the popcorn stand) with any expectation above, say, a baseline of cheap and nasty, it has to be said that there are massive stylistic differences between the 80% or so of the film that is Peeters’s work and the grubby Murakami inserts. Nor was it cool for Corman to foist these new scenes onto the film without telling Peeters. Male producer takes film off female director and gives it to a male director with a “more rape” instruction. I think we can all see what’s wrong here. 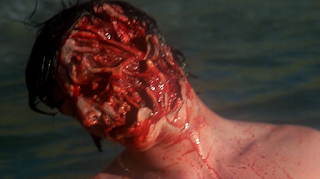 When Peeters saw the finished product, she petitioned Corman to remove her name from the production, as did Ann Turkel. Corman ignored them. Which is also not cool. You hear a lot about the amount of careers Corman helped jump-start (Scorsese’s with ‘Boxcar Bertha’ being the most frequently cited) but on this showing the guy was a knob-jockey of the first order.

Having made those comments, the question still needs to be asked, in the interests of critical fairness: how does ‘Humanoids from the Deep’ measures up as a monster movie? Well, Rob Bottin’s effects work is decent given the budgetary restraints and the fish-monsters are creepy enough … until they fully leave the water. Scenes where they plod around at the carnival in the film’s interminable set piece finale are ridiculous, mainly because the actors seem utterly constricted by the costumes and move sluggishly and falteringly as a result. It’s hard to be scared by a monster, no matter how savagely its claws can rake your flesh and how unhealthy its designs on your womenfolk are, when all you need to do to outpace it is to veer off in the other direction and maintain a pace that makes Alvin Straight look like Ayrton Senna.
Posted by Neil Fulwood at 10:29 PM

I don't know if I'd ever argue Humanoids From the Deep is a good movie, per se, but it's at least interesting that it takes on the basic premise of Creature From the Black Lagoon in such an clear-eyed and unronantic way; basically, "yep, these fish are here to rape you." (I'd credit Shape of Water more for being a repudiation of it, if GdelT wasn't on record saying his sympathies were with the Gill-Man.)

If you're trying hard to lose weight then you need to jump on this totally brand new tailor-made keto meal plan diet.

To create this keto diet, certified nutritionists, fitness couches, and top chefs have joined together to develop keto meal plans that are productive, suitable, money-efficient, and fun.

Since their first launch in January 2019, 100's of people have already completely transformed their body and health with the benefits a professional keto meal plan diet can give.