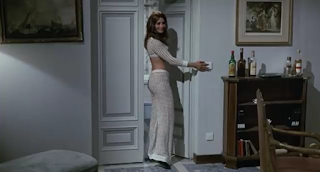 Friends, Romans, fellow exploitation fans, were I to ask of you if a nudity-addled movie in which Rosalba Neri slinks around seductively could entirely be a waste of time, would I be right in assuming that your response would be somewhere in the region of an overwhelming “no”?

Thought so. And yet ‘Two Males for Alexa’ never fully lives up to its promise; doesn’t make – or even try to make – all it could of the material.

And were I to ask of you, ye same merrie bunch, if it’s ever anything less than fun to watch Curd Jürgens wolfing down a big slice of ham as he glowers moodily at the camera, would I be right in assuming that you response would be the equivalent of a large flag hung from your bedroom window printed with the legend “CURD FUCKIN’ JÜRGENS – YEAH”? 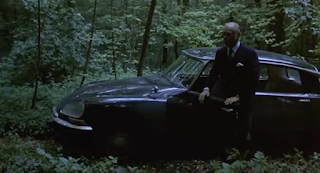 Again: thought so. And yet the colossus of Jurgens is threatened in scene after scene by the subsidence of Juan Luis Gallardo’s vacuous performance.

And, since I’m throwing out questions left, right and centre, here’s one more before we get to the meat and bones of this review: can a claustrophobic narrative of deception and sexual tension that locks its central characters in a single location and turns up the heat on them – literally and metaphorically – survive the inclusion, at the critical and most tense moment, of a series of nested flashbacks? You might be tutting and shaking your heads right now, maybe murmuring “Hmmm, probably not.” And I wouldn’t argue with you. 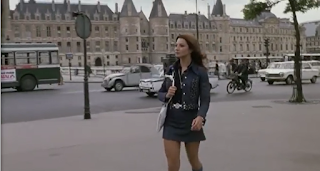 As you’ve probably divined from the above, I have mixed feelings about ‘Two Males for Alexa’ – mixed feelings that extend to the fact that Neri’s character is called Alexa-with-an-x in the goddamn title while the closing credits refer to her as Alecsa which not only doesn’t have an x, but is a stupid fucking spelling whichever way you look at it.

And that’s not my only title-related beef. A Spanish-Italian co-production (that exists in different cuts for each territory), the title is either ‘Fieras sin jaula’ or ‘Dues maschi per Alexa’ – respectively ‘Beasts Without a Cage’ and ‘Two Males for Alexa’. The Spanish title is meaningless, since two of the principles end up locked in a sealed room (i.e. essentially caged), while the maschi = males translation of the Italian is literal and a better rendering of the title would be ‘Two Men for Alexa’. In the US, it showed up as ‘Two Masks for Alexa’ – a forgivable mistranslation (maschi mistaken for maschere) resulting in what I consider a better title. In Germany, it was released as both ‘Im Rausche der Sinne’ (‘In the Chaos of the Senses’ is the best I can do with that one) and ‘Bitterer Whisky’ which simply means ‘Bitter Whisky’ and not, as I originally thought, ‘Whisky That’s More Bitter Than’. Because that’d be silly. More bitter than what exactly?

Anyhoo, whatever title you care to hang on it, and whichever version you watch (the crucial difference is that you get more boob for your buck in the Italian cut), the basic premise of ‘Alexa’s Two Fellas in the Chaotic Senses of the Bitter Whisky’ is thus: while gold-digger Alexa (Neri) dallies with her stud muffin lover Pietro (Gallardo), her considerably older husband Lord Mannering (Jürgens) seethes with revenge while his daughter Catherine (Emma Cohen) frets that Alexa – her contemporary at university – is out to steal her inheritance. Catherine’s subplot is abandoned pretty quickly (in fact, her scenes seem to alternate between exposition and padding) as director Juan Logar focuses on the logistics of how Mannering frames Alexa and Pietro for his own death (that’s only a minor spoiler, btw) and leaves them, quite literally, to rot.

Only, as noted earlier, no sooner does Logar’s script put the lovers in a claustrophobic predicament than he embarks on a lengthy series of flashbacks that serve very little narrative purpose (the interrelationships and Alexa’s manipulation of Mannering to vouchsafe herself a life of luxury have already been established, and how she comes to meet Pietro is neither here nor there); moreover, when Logar finally hauls the film back into the here and now, Pietro’s reeling from a defeated escape attempt, the details of which are vague and the fallout (half the room is on fire) inexplicable. The psychological trauma the pair undergo – which should surely have been the dramatic dynamo of the film’s second half – is rushed and dependent entirely on hamfisted voiceover when so much more could have been communicated visually. 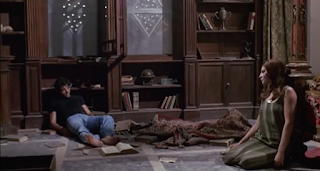 As ‘Two Males for Alexa’ stumbles towards its final moments, the script flirts curiously with the possibility of a final twist (one that, admittedly, would have been difficult as hell to achieve but utterly impressive if Logar had pulled it off) only step back from it and deliver an ending that I’m tempted to call arbitrary or banal but it isn’t even that. I’d be hard pressed, in fact, to call it an ending. The film simply stops and the end credits roll.

This is how my acquaintance Wesley Virgin's biography launches in this SHOCKING and controversial video.

As a matter of fact, Wesley was in the military-and soon after leaving-he found hidden, "MIND CONTROL" secrets that the CIA and others used to get everything they want.

As it turns out, these are the same secrets tons of celebrities (notably those who "became famous out of nothing") and top business people used to become wealthy and famous.

You probably know how you use less than 10% of your brain.

Mostly, that's because most of your brainpower is UNTAPPED.

Perhaps that thought has even taken place IN YOUR very own mind... as it did in my good friend Wesley Virgin's mind 7 years back, while riding a non-registered, beat-up trash bucket of a car without a license and $3 in his pocket.

"I'm so frustrated with living check to check! Why can't I become successful?"

You've been a part of those those types of questions, isn't it so?

Your own success story is going to be written. You need to start believing in YOURSELF.