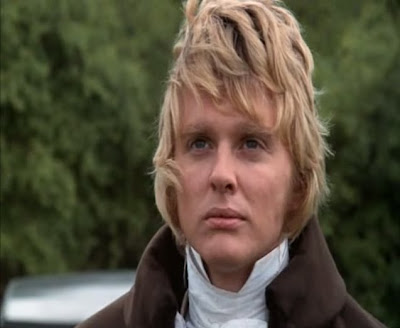 Talk about potential. ‘Captain Kronos, Vampire Hunter’ had all the elements to make it one of the Hammer’s finest horror movies, the curtain raiser to a franchise to rival the Dracula or Frankenstein franchises.

The film ticks the right boxes in its traditional period setting, its embrace (and subversion) of vampire tropes, its third act narrative development that links it to the Karnstein trilogy, its bevy of beauties (including Caroline Munro, Wanda Ventham and Susanna East) and its mysterious anti-hero, the titular Kronos, an aristocratic military type who has survived a vampire bite and dedicated himself to kicking vampire arse from one end of the British Isles to the other. He’s moody, enigmatic and handy with a sword. The ladies like him, too, hence he spends a certain amount of screen time conducting a fleeting romance with the voluptuous Carla (Munro). Pretty cool dude, right?

Unfortunately, the problems start with the casting of Horst Janson as Kronos. Although an accomplished actor in his native Germany, Janson never seemed quite at ease in English language roles; and while there’s no doubt that he has the physicality and aristocratic looks required to play Kronos, he doesn’t bring the character to life.

This, is turn, damages the relationship, central to the narrative, between Kronos and his partner Dr Marcus (John Cater). The hump-backed and sometimes self-pitying Marcus is a different beast to the usual “sidekick” stereotype: he’s there neither to provide comic relief or deliver screeds of expositional dialogue, but functions as a cerebral and rigorously determined vampire hunter in his own right. Sadly, with Janson unable to flesh Kronos out into a three-dimensional protagonist, there is no inkling of what keeps these very different men together.

Likewise, the relationship between Kronos and Carla is by-the-numbers, shoehorned in and lacking any real chemistry. A shame, since the striking and eminently likeable Munro is reduced to mere set dressing. 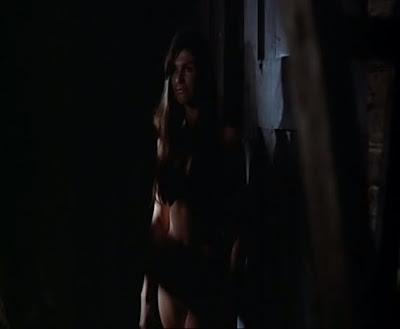 Fortunately, when ‘Captain Kronos, Vampire Hunter’ gets things right, it does so iconically and interestingly enough to give us hints of the film it could have been. The treatment of vampirism does things differently: attacks occur in the daylight, the cross is useless unless its wearer is devout to begin with, and the victims are drained not of blood but of their youth. Kronos’s philosophy of vampire hunting seems to be tinged with Eastern mysticism and he openly admits that “there are different ways to kill different vampires”. The black-hooded figure whose appearance presages the attacks is iconic and properly macabre. The attacks are over quickly and not eroticized in the manner of, say, the Christopher Lee Dracula films.

The film also makes an interesting juxtaposition between the transient Kronos – a man who seems to have no home, no family and only one friend (which is not to say we should in any way feel sorry for someone who gets to enjoy a dalliance with Caroline Munro) – and the Durwards, an ostensibly close-knit family but with one mother-humper of a secret in the closet.

The Durwards are held together by siblings Paul (Shane Briant) and Sara (Lois Daine). Given their closeness and Sara’s androgynous looks, you’d be forgiven for thinking that there’s a touch of the Emil/Elizabeth relationship from ‘Demons of the Mind’ percolating away in the background. But the focus seems to be more on their ailing mother Lady Durward (Ventham), still grieving the death of her husband from the plague. Paul blames surgeon Grost (John Carson) for not saving Durward’s life. Meanwhile, Grost – horrified at the recent attacks – joins forces with Kronos. 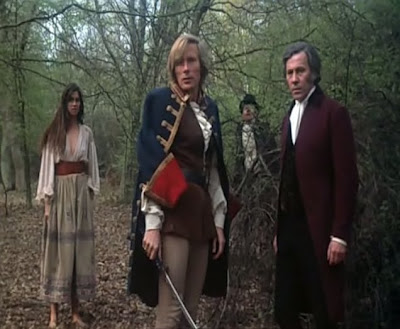 It almost goes without saying that Briant’s turn is the standout (closely followed, arguably, by Cater). He brings a similar degree of vulnerability to the role as he does as Emil, but without Emil’s capacity for sociopathic behaviour. Sadly, it’s a very limited role and the denouement sees Paul sidelined while the rest of the cast get stuck in.

Hammer dropped the ball with ‘Captain Kronos’: with Briant in the title role, Munro’s part beefed up and better execution of the swordplay (the duelling scenes are pretty bad!), it could have been a classic. Kronos himself might have taken up the mantle from Van Helsing. It’s sad to reflect that what we’re left with is, at best, a watchable intimation of what could have been.
Posted by Neil Fulwood at 6:13 PM