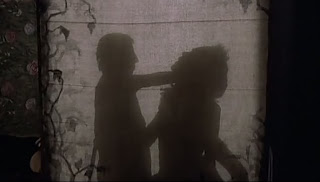 Broadly speaking, the glory days of the giallo were the mid 60s to the late 70s. But the genre never entirely went away. Still hasn’t. Dario Argento saw in the new millennium with ‘Sleepless’, a rather calculated return to form that gave him the biggest hit in his native Italy that he’d had since ‘The Stendahl Syndrome’ five years earlier. 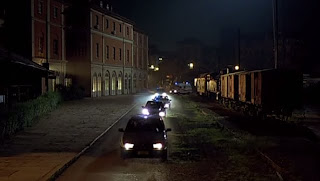 A prologue set in 1983 has world-weary cop Inspector Moretti (Max von Sydow) promised the young son of a murder victim that he’ll bring the killer to justice if it takes him the rest of his life. A promise he thinks he’s fulfilled when the dead body of the dwarf identified as the killer is retrieved and the case is closed. 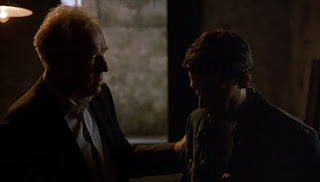 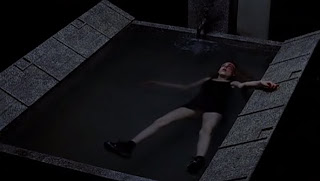 There are two ways to look at ‘Sleepless’: an old-school return to the giallo stamping ground that Argento made his name with; or a “greatest hits” package that simply rehashes former glories. Indeed, the case for the latter hardly needs to be made. There isn’t a single set-piece that doesn’t recall an earlier example of Argento’s filmography, with ‘Deep Red’ in particular being worked over (major plot points involve a child’s nursery rhyme, a buried childhood memory, a character poking about in an old dark house, and a victim menaced by a mechanical doll marching inexorably out of the shadows) like there’s no tomorrow. A secret unearthed in a graveyard recalls ‘Cat of Nine Tails’; a victim framed between the windows of a train is reminiscent of the huge glass doors both framing and denying prevention of the murder in ‘The Bird with the Crystal Plumage’; some prowling camerawork in a concert hall is straight out of ‘Opera’, and the plot device of a novelist whose opus the killing spree seems to be patterned on is ‘Tenebre’ writ large. 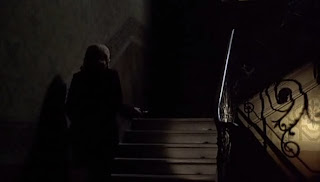 However, coming after the abysmal ‘Phantom of the Opera’, and providing the last hurrah of satisfyingly stylish Argento goodness prior to a decade’s worth of offerings (‘The Card Player’, ‘Do You Like Hitchcock?’, ‘Mother of Tears’, ‘Giallo’) that has seen his stock plummet to a new low, even something as deliberately reflexive as ‘Sleepless’ is to be embraced: it’s a reminder, however self-derivative, of what you love about Argento.

Funniest story that I can tell you, Neil, about Sleepless.

When this film premiered, I frequented cult film message boards and the like with like-minded film fans. This was before the heydey of the blog, so almost all cult film dialogue occurred here. The first English-language poster who had seen the film had titled his message in the forum as such:

"I have seen the new Argento and it doesn't completely suck."

How amazingly astute this title was. It accurately encapsulated both the film and hinted at the poor state of Argento's reputation in one sentence. I've always remembered it.

Your review is spot on, Neil. I agree one-hundred percent. I bought the Italian disc when it was first released. The English dub is precious for Von Sydow's performance, but the Italian dub plays better, in my opinion, dramatically. Not a particularly good Argento, as it is way too conservative, but stands out in his filmography on a relative basis, as you note, Neil.

As usual, I always enjoy your writing, Neil. I hope the novel is coming along well and also hope you are doing well yourself. Be cool.

Thanks, Hans. Always appreciate your comments. Whoever chose "I have seen the new Argento and it doesn't completely suck" for his message title deserves a prize: that is one stellar summarizing comment!

The novel's progressing fairly slowly at the moment, mainly because I've become involved in a fund-raising campaign to commission a commemorative statue of the novelist Alan Sillitoe, who died last year, in his (and my) hometown of Nottingham. I'm helping out with getting a website up and running as well as various public events, so that's taken up quite a lot of my time lately.

I've got some time of work at the end of this month - almost a fortnight - so I'm looking forward to getting plenty of productive work done on the novel then.

Thanks again for stopping by and leaving a comment, Hans. Hope life's treating you well.