THE SILLITOE PROJECT: The Loneliness of the Long-Distance Runner

Posted to commemorate the first anniversary of Alan Sillitoe’s death 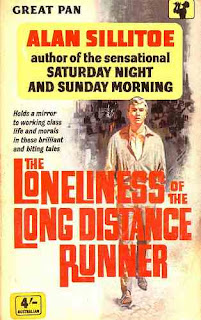 Published in 1959 and one of the few Sillitoe titles (along with ‘Saturday Night and Sunday Morning’ and his last two or three books) still in print, this collection of short fiction contains nine stories: ‘The Loneliness of the Long-Distance Runner’, ‘Uncle Ernest’, ‘Mr Raynor the School-Teacher’, ‘The Fishing Boat Picture’, ‘Noah’s Ark’, ‘On Saturday Afternoon’, ‘The Match’, ‘The Disgrace of Jim Scarfedale’ and ‘The Decline and Fall of Frankie Buller’.

The title story is about a youth named Smith who is sent to Borstal after robbing a bakery. Borstals were youth prisons in the UK (named after the village near Rochester where the first one was established in 1902), which housed delinquent offenders under the age of 23. The Borstal model was abolished in 1982 when the Criminal Justice Act 1982 made provision for youth custody centres. The controversial British TV play ‘Scum’, written by Roy Minton (remade as a feature film when the original was banned), was an attack on the Borstal system.

Smith (his first name is never mentioned, rendering him effectively an Everyman given that Smith is the most common surname in the UK) demonstrates an affinity for cross-country running which, as he ruminates early in the story, is “a bit rare, having long-distance cross-country runners in Borstal, thinking that the first thing a long-distance cross-country runner would do when they set him loose at them fields and woods would be to run as far away from the place as he could get on a bellyful of Borstal slum-gullion”. Therefore, seeing an attempt to bolster his own reputation as a progressive jailer, the governor coerces Smith into competing for the Borstal Blue Ribbon Prize Cup For Long-Distance Cross-Country Running (All England), a prize that the gangly-limbed and fleet-footed Smith could win with his eyes closed. If he wanted to …

Essentially a first-person stream of consciousness, ‘The Loneliness of the Long-Distance Runner’ probes Smith’s mind as he reaches his anti-establishment decision. Whipsmart, attitudinous, cunning as a fox with criminal tendencies and blessed with, to quote William Ernest Henley, an “unconquerable soul”, Smith is perhaps Sillitoe’s greatest working class rebel. Even Arthur Seaton accepts the reality of lifetime at his capstan lathe, with booze, birds and brawling as the raison d’etre of the weekend. Smith accepts nothing, nor does he complain or seek to the shift the blame when the establishment demands recompense of him. Smith is the patron saint of everyone who has ever said “fuck you” to authority and lived it!

Most of the other stories are “slice of life” vignettes. ‘Uncle Ernest’ is about a lonely middle-aged man who befriends two prepubescent girls and starts buying them treats, seeing in them the daughters he never had. His intentions are purely good-hearted, but two bullying policemen warn him to stay away from them, their groundless assertion that “we know all about you” awakening in Ernest a guilt for something never done, never even contemplated, and yet a guilt so great that his final refuge is “through the swing doors [of] the crowded and noisy bar of a public house, his stare fixed by the beautiful heavily baited trap of beer pots that would take him into the one and only best kind of oblivion”. It’s a heartbreaking piece, more so for Sillitoe’s depiction of how the sisters, once they’ve cottoned on his generosity, start taking advantage of him.

‘Mr Raynor the School-Teacher’ starts off as a wry portrait of a man settling into the dull routine of work and the tedium of marriage, whiling away his life bullying his class into silence, the better to gaze at the buxom young woman who works at the haberdashery shop across the street. It’s only by the final paragraphs that Sillitoe plays his hand and the small collection of pieces cohere themselves into a picture of loss and helplessness.

‘The Fishing Boat Picture’ treads similar territory, chronicling the aftermath of a couple splitting up. Ostensibly, the man – Harry – seems content enough to live alone. He settles into the routine of work; reads his books; smokes his pipe. The picture of the title – the remaining item from a triptych (the other two broken during vicious arguments) – serves as an epitaph for their relationship. Then his estranged wife reappears on the scene and asks for it back. Harry relinquishes the picture philosophically enough, only to discover the next day that she’s pawned it. The story is a study in regret and ends unexpectedly.

The young lads in ‘Noah’s Ark’ are less like Ernest, Harry or Mr Raynor, and more like teeny versions of Smith in the title story. They skive off school, head to the Goose Fair (a yearly funfair that occupies a large recreational ground in Nottingham), cadge pennies for rides, pick up drop cigarettes, swear, sing rude songs and engage in the odd bit of petty theft. When their ill-gotten finances run out, they take to playing a dangerous game on the mechanical ride of the title, trying to ride for free while evading the bullish owner. Think ‘Emperor of the North’ with a little kid instead of Lee Marvin, a carnival ride instead of the train but still with Ernest Borgnine as Ernest Borgnine and you’ve pretty much got ‘Noah’s Ark’. It’s also an effective study of peer pressure and complicity, and captures that moment when a prank ceases to be a prank and becomes an altogether more serious matter.

A similarly young protagonist is the narrator of ‘On Saturday Afternoon’. Left out of a trip to the cinema, he passes the time roaming the back alleys of his hardscrabble neighbourhood. Overhearing subdued looking man accounting for the coil of rope he’s carrying with the blunt statement of purpose “It’s to ’ang missen with”, the boy follows him out of curiosity. Thus he becomes witness to (and complicit in) a suicide attempt.

I’d be tempted to call ‘On Saturday Afternoon’ the jewel in the crown after the title story, were it not for the poisoned brilliance of ‘The Match’. Storywise, there’s not much to it: Lennox attends a Saturday afternoon football match with his mate Fred, becomes increasingly morose at the poor conditions (a murky fog renders much of the game unwatchable) and outright angry at the final score, which sees Notts County lose pitifully at home (fifty-three years after Sillitoe wrote ‘The Match’, Notts County aren’t doing much better). Lennox’s belligerence is at odds with Fred’s happy-go-lucky demeanour. Fred goes home to his new bride and makes the most of the rest of his weekend. Lennox, however, goes home and deliberately picks a fight with his wife. What Sillitoe pinpoints here is the moment when somebody does something for pure spite, knowing full well what they’re doing and how destructive the outcome will be, but pathetically unable to stop themselves. It’s a horribly realistic and psychologically accurate piece of writing.

Relationships are at the centre of ‘The Disgrace of Jim Scarfedale’, Sillitoe here contrasting a volatile romantic relationship with the smothering influence of a mother unable to give up her son to the realities of growing up, life, love and the outside world. Mrs Scarfedale is a pinafore-wearing, house-proud Midlands version of Mrs Bates, constricting Jim with the taut knots of the apron-strings. Like ‘Noah’s Ark’ and ‘On Saturday Afternoon’, the story also deals with complicity.

The collection ends on an unexpectedly poignant note with ‘The Decline and Fall of Frankie Buller’ which seems, for its first few pages, to be a back-streets of Nottingham vignette that could have been an early sketch for ‘Saturday Night and Sunday Morning’, but suddenly reveals itself as a nakedly autobiographical work.

The nine stories here add up to little more than 170 pages, yet ‘The Loneliness of the Long-Distance Runner’ is a major book. Sillitoe’s ability to evoke a time and place is faultless; his dialogue has the rough-hewn poetry of real working class life. His characters rage and struggle, tearing themselves fully-formed from the page even though their creator has sketched them with deceptively few sentences. Sillitoe gets inside their heads. He understands them. He makes them all too familiar. Disturbingly familiar at times. And therein lies the genius.

Did Sillitoe actually coin the phrase, 'the loneliness of the long distance runner'. It has entered our every day usage and I have always wondered where it came from.
Judging by your review it has nothing in common with the books plot. I do know it was an Iron Maiden song though!! And as I re-call it wasn't anything to do with this novel.

To the best of my knowledge, Sillitoe's title was the first usage of the phrase in contemporary culture. The Iron Maiden song references Sillitoe's story obliquely in the line "you feel like throwing the race".

It's not the only time a Sillitoe story has inspired a song - the Arctic Monkeys took the title of their album 'Whatever People Say I Am, That's What I'm Not' from a line in 'Saturday Night and Sunday Morning', while XTC's 'Black Sea' album features a track called 'Travels in Nihilon', title after one of Sillitoe's more obscure novels.

Ah the lad from Notts knows his stuff!! The fisrt I heard of the phrase was the Iron Maiden song ( Somewhere in Time album if I remember correctly ).