Permit me to hawk up a loogie and spit on an icon.
Ready? Got your burning torches lit? Rounded up a posse? Tar and feathers to hand? Rail on order to run me out of town on?
Okay, here goes: I’m not keen on John Wayne.
There: I said it.
I’m not keen on him because of his swaggering self-satisfaction, I’m not keen on him because of his right wing agenda (this is, after all, the guy who starred in and co-directed a pro-Vietnam movie), and I’m not keen on him because, frankly, the guy couldn’t act. In fact, I’ll go as far as saying that there are plenty of John Wayne performances which are downright embarrassing.
In Henry Hathaway’s ‘True Grit’, the sight of The Duke as Rooster Cogburn riding full pelt into a gunfight, reins clamped between his teeth, pistols in both hands, is so obviously a striving for macho iconography that it’s almost laughable. In the Coen Brothers’ spot-on remake, the sight of Jeff Bridges doing exactly the same thing is a thrilling piece of cinema: from the world-weariness with which he lifts the reins and bites down on them, to the blink-and-you-miss-it hint of desperation, to the audacity of his Light Brigade-style charge against superior numbers, this moment alone would probably be enough to make me dance on the saloon roof declaring the film the best western since ‘Unforgiven’. 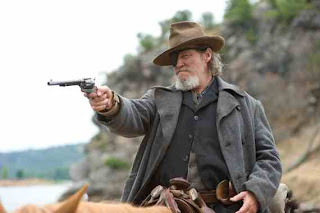 Shout it loud, then, that the rest of ‘True Grit’ is just as good. Going back to the morality (and almost comedic absurdity) of Charles Portis’s novel, the Coens get it intuitively right in every aspect that Hathaway got it wrong. Gone the wooden characterisation of LaBoeuf by Glen Campbell; in its place, a fine and entertainingly self-deprecating supporting performance courtesy of Matt Damon. Gone the missing-the-point casting of then 22-year old Kim Darby as the 14-year old narrator and all-too-young heroine Mattie Ross; in its place a simply remarkable turn from Hailee Steinfeld, authentically 14 at the time of shooting, and yet inhabiting the skin of her character with a depth of nuance and a genuine screen presence that many seasoned performers three times her age would weep to achieve.

I’m still unsure, a month after I saw the film (yeah, I’m getting tardy with my reviews lately; blame it on the novel!), who I’m more impressed by: Bridges, Damon or Steinfeld. Perhaps, ultimately, Steinfeld. We all know Bridges is a great actor, and the role of Rooster Cogburn allows him to cut loose and have a little fun, while still anchoring things with an ornery gravitas. Damon was always more than just a pretty-boy leading man, and here he (pardon the pun) earns his spurs with an often hilarious portrayal of a self-important windbag. 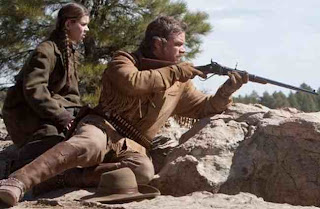 But it’s Steinfeld who comes out of nowhere and provides the emotional core of every scene she’s in – which is basically the whole movie! That she came away empty-handed on Oscar night is a crime.

The bad guys of ‘True Grit’ do equally sterling work, with Josh Brolin on typically excellent form (after this and his breakout performance in ‘No Country for Old Men’, here’s hoping he becomes a Coens regular) and Barry Pepper bringing a gimlet-eyed depiction of career villainy to the table.
Roger Deakins, back in the fold after scheduling conflicts didn’t allow him to lens ‘Burn After Reading’, conjures a vision of the old west that is at once classically elegant, grubbily unromantic and tinged with the melancholy of reminiscence – this latter particularly appropriate as it is Mattie in middle age who recounts the story, a device that culminates in a poignant final scene.
In opting not to remake Hathaway’s film, but strip things back to the original novel, the Coen Brothers have finally given Charles Portis’s ‘True Grit’ the big screen incarnation it deserves.

Great that you're back, at least for a while. I hope you have some progress with novel, as i miss your posts here.

I'm appalled at your gall, sir. Just another ultra liberal European with Anti-American sentiment. To disparage the name of a true patriot, Mr. John Wayne.

But yeah, I'm not a fan either, because as much of an icon as he was/is, his acting was rarely up to the task. So I have to wholeheartedly agree that Bridges plays a superior Cogburn.

As for who steals the show in the Coen remake, it's Steinfeld for me, as well. It's rare that a 14-year old can perform as well as she does in a serious movie. When you add in that she has to speak the Coen's dialogue, something that's a bit more idiosyncratic than most, and that she hits her marks perfectly with it, you have what I thought was the best performance of last year.

Agreed! John Wayne was some what limited as an actor. I cannot believe he won a Oscar for True Grit as the performance is certainly nothing memorable.
He was much better in The Searches and Thhree Godfathers by country miles.
But he is definitely still an icon for all his limitations.
Steinfeld for me was the stand out in the Coen's version. She has far too much talent than a girl of that age has the right to possess!! I believe she should have scooped the Oscar for her role....but hey what do I know....I'm not a 'professional'???!

I'll second Brent on Three Godfathers, which is probably both Wayne and John Ford's most underrated western. But I won't argue about Wayne except to note that he was a persona, not an actor. On the other hand The Alamo is a strangely engrossing film in a genuinely epic manner.

As for True Grit, Damon and Pepper were the real standout actors in the Coen version, but I suppose I take Bridges for granted. Steinfeld left me cold somehow.

Good luck on that novel, Neil.

Slobodan - good to be back. Novel progressing okay, hoping to get back to the normal scheduling of reviewing by the end of the month.

Troy - I'm with you entirely on Steinfeld's incredible achievement: not only does she hold her own against the likes of Bridges, Damon, Brolin and Pepper, but - like you say - she engages beautifully with the Coens' idiosyncratic dialogue.

Brent - you're right: John Wayne was an icon rather than an actor and there are occasions in his filmography - 'The Searchers' in particular - where I can entirely understand his iconic status. It's just that, for me, the really shoddy and ham-fisted performances occur much more frequently on his CV than the genuinely iconic ones. I'm also in complete agreement with you that Hailee Steinfeld should have gone home with the Oscar.

Sam - thanks for your good wishes with the novel. Progressing well, but with some way still to go. Was it Steinfeld herself who left you cold, or the character? If the latter, yeah - I can dig that. And in a strange way it heightens my appreciation of her performance, that she finds the humanity in an essentially stubborn and self-righteous character. For me, it was the dynamic between Steinfeld's rather prissy young madam and Bridge's ornery old boozehound that made it.