SUMMER OF SATAN: Messiah of Evil 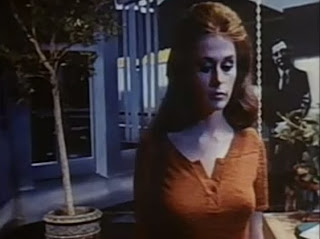 So, I’m sitting down to write a review of Willard Huyck’s 1973 cult classic ‘Messiah of Evil’ and wondering why I’m bothering given that Tim Lucas, on the indispensable Video Watchblog, captured the essence of the film in three words: “the American ‘Suspiria’.”

Yeah, I know: ‘Messiah of Evil’ predates ‘Suspiria’. But still …

Both films aurally and visually overwhelm the viewer from the off; both thrust their audience into a milieu that’s off-kilter, disconcerting and disorientating; both throw narrative coherence to the wind; both leave you with the feeling of being hardwired into someone else’s nightmare. And both use the rococo stylization of their settings (a dance academy in Argento’s film; an artist’s beach house in Huyck’s) to such aesthetically purposeful effect that mise en scene becomes a raison d’etre.

(That last sentence was terribly pretentious; I’ll try not to let it happen again.) 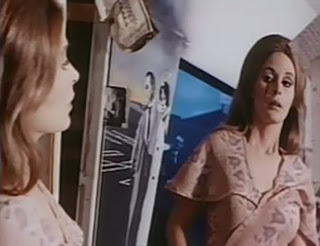 The film opens very much in giallo fashion with a man fleeing an unseen enemy. His face is bathed in sweat, his mouth pulled into a rictus of fear. He’s running along an anonymous street, a high wall to one side. Exhausted, he collapses. A gate opens in the wall and a shy-looking girl beckons him in. He finds himself in a backyard with a swimming pool. Splashing water on his face, he again sinks to the ground. The girl extends an arm to him. He reaches towards her, an admixture of gratitude and relief on his face. She draws a straight razor across his throat.

Cue opening credits. The next scene is of a long institutional corridor, brightly lit. So brightly that the small rectangle that marks the far end of the corridor seems to shimmer. A figure emerges, indistinct, and slowly moves towards the camera. A voiceover warns someone – a character offscreen? we, the viewers? – about events at a place called Point Dune. The voice becomes increasingly agitated and the brief monologue ends in a scream.

The voiceover is quickly identified as that of Arletty (Marianna Hill), who we next see driving through the night to reach Point Dune, an isolated community that’s home to her artist father Joseph Long (Royal Dano). Arletty’s concerned at a series of letters she’s received from Joseph which are increasingly worrying in their content and warn her to stay away. She doesn’t heed the warning. At Point Dune, she finds his house deserted. Enquiring at an art gallery whose blind owner seems all the more sinister for being sightlessly surrounded by canvases, she’s advised that other parties have been asking about Joseph and is pointed in the direction of the local motel. It’s here that she meets Thom (Michael Greer), a louche aristocratic type of Portugese descent, and his two “travelling companions” Toni (Joy Bang) and Laura (Anitra Ford). They’re busy interviewing town drunk Charlie (Elisha Cook Jr) when Arletty arrives and she gets to hear his hushed tale of a blood moon and a curse on the town. Later, speaking to her privately, Charlie advises Arletty that she’ll have to burn her father (“no use puttin’ him in the ground”).

This is pretty much the point at which such dim vestiges of coherence as may have been hovering around the narrative disperse and disappear, never to return. From hereon in, it’s all about atmosphere. And one of the key elements in achieving this is the set design of Joseph’s house. Much of ‘Messiah of Evil’ takes place here, and there are several voiceover-heavy scenes of Arletty reading Joseph’s diary and getting the impression that something isn’t quite right in Point Dune, all of which could have been visually boring – static cinematography, dull interiors. Joseph as artist is the film’s stroke of genius. The changes affecting the townsfolk are the subject of what, it is implied (like everything else in ‘Messiah of Evil’, it’s left to the imagination), is Joseph’s last great work. Frescoes cover the interior of the house, walls lined with the grey, hollow, lifeless faces of the things the people of Point Dune have become. 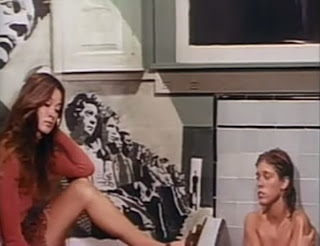 I say “things” because the film flirts with the iconography of zombies and vampires before suggesting, towards the end, that they are the brainwashed followers of a new “dark religion”. A late-in-the-day bit of backstory regarding a preacher/cannibal (yep, you read that right) throws up more questions than it answers, particularly since it suggests that Thom might be playing an unexpected part in the proceedings. But again, the film that drifts further into enigma rather than reaching resolution or clarification.

The best description I’ve ever read of ‘Suspiria’ – and it shames me that I can’t recall who it’s attributed to – was that it was what you imagined horror movies were like when you were too young to see them. ‘Messiah of Evil’ fits the description, too. Approached in the right mood – on proscribed substances, say, or mildly under the influence of alcoholic beverages (not that I would ever endorse such activities on this blog*) – it worms into the subconscious and royally fucks you up. While there’s nothing here as visceral as, for instance, the crucified sheep in that classic of midnight movie mind-fuckery ‘El Topo’, the film entire has a cumulative power that works on a primal and nightmarish level. 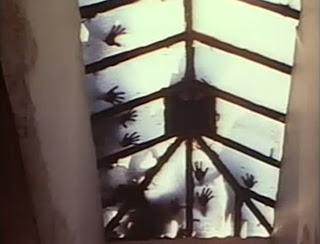 Almost like a dark fairytale, the feeling that Arletty is travelling ever more inexorably towards something she can never understand, control or escape from is palpable. Even before she reaches Point Dune, there’s a creepy interlude at a gas station where she encounters an albino truck driver. Arletty doesn’t make the discovery the luckless attendant does – that the trucker has a cargo of bodies under the tarpaulin – but goes on her way disconcerted by his deathless presence. Later, Laura encounters this same individual after she tries to leave Point Dune. Her brief ride with him, Wagner blasting from the truck radio as the truck crawls through the night, half built houses to either side of the street, is a bizarre, surreal, skin-crawling scene that I know will stay with me.

Likewise Toni’s big scene in a movie theatre. Think Hitchcock’s ‘The Birds’ redone with the undead and meta-textualized to the max because it’s a scene in a movie that occurs in a cinema while the heroine is shaking her head at the clichéd excesses of a genre film playing out in front of her. I wonder how familiar Lamberto Bava was with ‘Messiah of Evil’ when he made ‘Demons’. 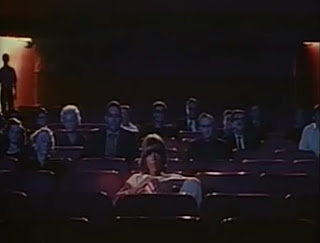 The gas station. The movie theatre. Other touchstones of small town Americana are present and correct when the action moves outside of Joseph’s beach house. A mini-mall is the scene of a macabre revelation (you’ll never look at your local supermarket’s the meat counter the same way again); the silent gathering of a number of pallid townsfolk in an alleyway is much scarier for not knowing quite what they’re doing there; the blank, neon-lit row of storefronts that Thom hurries past as he searches for Toni are abject in their lifelessness, their loneliness – they gradually become a metaphor for the town itself.

‘Messiah of Evil’ – inasmuch as it can be pinned down to anything – takes a number of visual tropes, be they generic, cultural or artistic (I’m tempted to describe the scene where Arletty and Thom find a corpse on a beach as a Vettriano canvas re-imagined by Weegee, except ‘Messiah of Evil’ was made 15 years before Vettriano sold his first painting) and boils them down to an all-pervading atmosphere of dread.

*ROFLMFAO, as I believe the kids would put it.

And it was a very good summer .

Summer ain't over yet. Plenty more devilish movies lined up on this blog over the next month or so.

I freaking LOVE this movie.

Part of it is because I got to see it blind, and it becomes ever more rare that I get to see a movie without some idea of its reputation. Let alone, get to see a film sans preconceived notions and get blown away by it.

I love the way that it captures not merely small town America but the feel of the dusty small beach towns I grew up in. I love the Twin Peaks blind art gallery owner, and the style and the paintings. I love that in writing my review I was forced to rack my brain in order to figure out if there was a PC term for a Black Albino (I found none).

The only quibble I have (and it is just a quibble) is that silly shot of a guy in a cassock wading out of the ocean is like a pitcher throwing a no hitter only to give up a grand slam in the bottom of the ninth.

Granted I was so tense at that point that maybe I was just desperate for something to laugh at.

I know what you mean about that particular shot, Bryce, but you're right: it is only a minor quibble. 'Messiah of Evil' offers so many disconcerting images and almost subliminally creepy moments. My only gripe is that I watched it - as you can tell from the screengrabs - in a horrible, washed-out, panned and scanned print. I understand a full 2.35 aspect remastered print was released on DVD a couple of years ago. I really need a copy!