WINTER OF DISCONTENT: Anthropophagus: The Beast 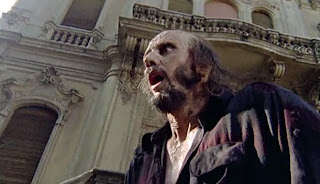 Watching exploitation movies, there’s always the risk of an anticipation/actuality disconnect. Sometimes the title sets up the false expectation. ‘Lesbian Vampire Killers’, anyone? I was expecting a movie about lesbians hunting vampires, Buffy gone muffy as it were. Sometimes the cover art suggests a lurid thrill-ride only for the viewer to realise, as the end credits roll, that the artist had given up on the piece of shit movie ten minutes in and painted what they would have conjured on screen if only someone had demonstrated the foresight to hire them as director instead of the talentless fucking hack who actually called the shots on the rancid slab of celluloid in question.

On which note: ladies and gentlemen, please give a big warm Agitation of the Mind raised middle finger to Joe D’Amato’s ‘Anthropophagus: The Beast’. 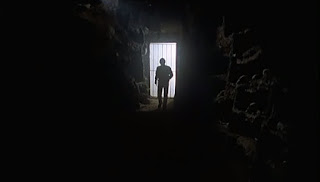 So I’m not going to clog up the thousand words of this review with any bemoaning the fact that I didn’t know what I’d let myself in for. I was even aware, courtesy of an entry in Tim Brayton’s 2010 Summer of Blood season on Antagony & Ecstasy, that this was one of the least ineptly made entries in the D’Amato canon even if it’s first half was terminally low on tension, incident and drama.

What I didn’t expect of ‘Anthropo-Fuck-This: The Cheese’ was that it would be so turgidly and dust-gatheringly slow. That the set-pieces would be so tortuously contrived and so utterly leeched of tension. That, at 91 minutes, it would contain more padding than an orthopaedic mattress. That, in short, it would leave me not disgusted, not outraged, not corrupted or depraved, but plainly and simply bored.

The opening scene has a German couple holidaying amongst the Greek islands finding themselves a nice empty beach. He stretches out and works on the tan, a pair of industrial sized headphones clamped over his ears; she plunges into the invigoratingly cold sea and swims out to where a rowing boat, seemingly devoid of rowers, is bobbing on the waves. What she finds in the boat isn’t revealed, but it occasions a piercing shriek, only the boyfriend doesn’t hear because of said personal stereo equipment. A POV shot of something heading from boat to shore suddenly gets very sinister as we see droplets of blood preceding its passage up the beach. The boyfriend looks up just in time to get a cleaver in his head.

It’s a reasonably effective opener. It sets the scene, it plays out in a somewhat unexpected manner and the sharp-instrument-meets-cranium pay off promises video nastiness a-go-go. So how much screen time do you reckon it accounts for? Minute and a half? Two? Three at the most?

And how about the next sequence where Julie (Tisa Farrow), on her way to the island residence of an English couple to whose visually-challenged teenage daughter Rita (Margaret Mazzatini) she acts as carer, cadges a lift with sojourning twenty-somethings Maggie (Serena Grandi), Arnie (Bob Larsen), Carol (Zora Kerova), Danny (Mark Bodin) and Andy (Saverio Valone), only to find the island deserted and her friends’ house empty apart from a traumatized Rita? Ten or fifteen minutes? Twenty if you really want to probe the interrelationships? 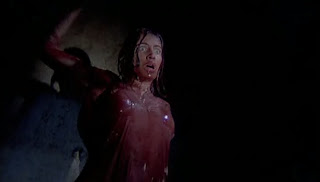 And the interrelationships in question? Arnie’s married to Maggie who is heavily pregnant (hands up anyyone who can guess where this is going; congratulations, you’ve just won two tickets to the DPP’s annual ball); Andy and Danny are best buds, but Andy’s not too struck on the fact that Carol, his sister, has a thing for Danny, while Carol herself is gets royally pissed off very quickly over Danny’s immediate attraction to Julie.

D’Amato establishes all of this so laboriously you’d think a Strindbergian angst-fest was on the cards. But no, Carol’s antagonism towards Julie pays off in a “locked in a cemetery at night” prank which (a) detracts from what could have been a tense “band of survivors hole up against unknown/unseen attacker” sequence, and (b) is curtailed arbitrarily before any atmosphere or tension can be developed. Otherwise, that’s it. The character dynamics are never explored. 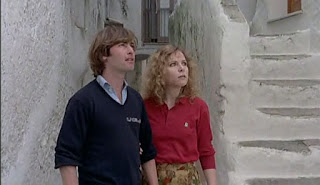 Even when ‘Anthropo-Fake-Ass: The Puh-leeze’ creeps past the halfway mark and our merry band of stupid-decision-making protagonists fetch up at a creepy old house which seems to have shared an architect with the domicile in ‘Deep Red’, there’s no sense of D’Amato infusing his narrative with any degree of urgency. Chase scenes ebb to the soporific. Hushed and supposedly urgent dialogue passages are punctuated with more pregnant pauses than a Harold Pinter manuscript. Characters split up, get distracted or go wandering off on their own with such moronic regularity that you very quickly cease fearing for their safety and instead get bored at how fucking long it takes for the inevitable blood-letting.

Which brings us to the gore. It’s incredibly fake. Even by the standards of Italian horror movies. That horribly unconvincing mannequin that tumbles down the mountain at the end of Fulci’s ‘Don’t Torture a Duckling’? Documentary freakin’ realism compared to what’s on show here.

So, yeah: the viscera is phoney, the tension is a non-starter, there’s no nudity, and the music is like listening to a rhinoceros trying to emulate the stripped-down synth-heavy score of a John Carpenter classic using some saucepans and a kazoo. Take it from me, the only reason ‘Anthropo-Dickless: The Zzzzzzzs’ got put on the DPP list was to protect audiences of the day against the possibility of RSI from repeatedly ramming their thumbs down on the “fast forward” button.
Posted by Neil Fulwood at 9:04 PM

God, this movie. I don't have anything to add to your review - and a damn amusing one it was, though I feel a touch guilt about laughing at your pain - but I felt like I need to commiserate with you for having forced yourself through it. At least it lacks the soul-wracking sexual viciousness of the Emanuel films.

Thanks, Tim. The healing process has begun. Largely thanks to some cask strength real ale and a viewing of 'Razor Blade Smile'.

'Razor Blade Smile' was like Powell & Pressburger at their most sublime compared to 'Anthropophagus'.