WINTER OF DISCONTENT: City of the Living Dead 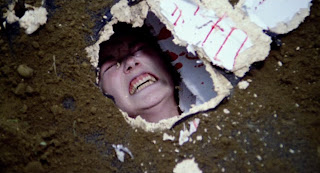 The first of three horror movies Lucio Fulci made with Catriona MacCall in a two-year period, and something of a stepping stone to his flat-out masterpiece ‘The Beyond’, ‘City of the Living Dead’ is atmospheric, incoherent and tries to con you that is has something to do with H.P. Lovecraft.

Like the two films that immediately followed it, the premise is basically: hero and heroine stumble upon piece of real estate that turns out to be one of the gateways to hell, a metric fuckton of weird and nasty shit ensues. In ‘The Beyond’, it’s a decrepit Louisiana hotel. In ‘The House by the Cemetery’, it’s the eponymous Freudstein residence. In ‘City of the Living Dead’, it’s an entire cemetery in the small town of Dunwich. 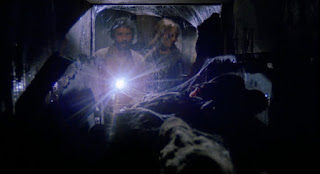 Naming a town Dunwich in any film, let alone a horror flick, is tantamount to the director pedalling around in front of the camera on a unicycle playing the ‘Witches’ Sabbath’ movement from ‘La Symphonie Fantastique’ on a mouth organ, while a big flashing neon sign slung around his neck blinks out, in blood reds and necrotic greens, the message “YO, MOTHERFUCKERS, IT’S CTHULU TIME”.

Only Fulci proceeds to do absolutely nothing Lovecraftian. There’s an appropriately claustrophobic buried alive moment that recalls Poe; some vicious treatment is doled out to a mistrusted outsider that evokes Fulci’s own ‘Don’t Torture a Duckling’; various characters find themselves holed up in confined locations (bars, funeral homes, cemeteries) a la John Carpenter’s besieged-by-supernatural-forces aesthetic; and there are zombies aplenty, reminiscent of any number of Italian horror movies from the same period. But absolutely bog all to do with the Cthulu mythos. 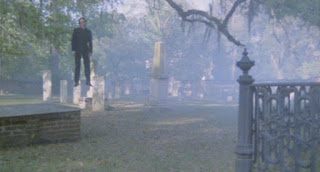 Here’s what we do have: a priest hangs himself from a tree in Dunwich cemetery which causes Mary (MacColl), a medium in New York, to have a fit and seemingly expire during a séance. The case attracts the attention of journalist Peter (Christopher George), who becomes even more intrigued after he attends Mary’s burial, realises she isn’t dead, rescues her from interment, and hears her story about the gates of hell opening as a result of the priest’s suicide. Meanwhile, in Dunwich, highly-strung artist Sandra (Janet Agren) turns to psychiatrist Gerry (Carlo De Mejo) to try to make sense of the disturbing visions which are tearing away at her sanity. Together, they discover that the unreal exists, the dead are coming back to life, the townspeople are turning against each other – and particularly against mentally ill teenager Bob (Giovanni Lombardo Radice) – and that the key to it all lies in the catacombs beneath the cemetery.

If the morse code operator in the back of your mind is repeatedly sending out the call sign whisky tango foxtrot at this point, don’t panic – you’re just experiencing narrative according to Lucio Fulci. Which is to say “what is this concept ‘narrative’? to hell with it! I’ll just string a bunch of weird and gruesome scenes together as I see fit.” My best advice is, relax and go with the flow. Keep calm and get eaten.
Posted by Neil Fulwood at 8:53 PM

Ha! Great review, Neil. As much as I love Fulci (mostly for his non-horror stuff), I just can't get on board with this movie. I've seen it about three times and am equally underwhelmed and bored with each viewing. I'm actually not a huge fan of any of his films in the "Gates of Hell" trilogy, but if I had to rank them this would be at the bottom. Personally, I think the whole "nightmare logic" excuse is a bunch of bullshit, at least in regards to Fulci's films.

This is actually my favorite of Fulci's if only because the "Sheep Guts Vomit" moment is one of the greatest bits of mind recoiling, "WHAT THE FUCK DID I JUST SEE" bits of shock I've seen in a movie.

I'm ambivalent about 'City of the Living Dead'. It has some crazy-ass WTF moments, but I'm with Aaron on not giving Fulci a pass for playing the "nightmare logic" card. The film has its longueurs, and the script seems to be a join the dots exercise in linking individually effective ideas: "Okay, right, I want a buried alive scene, and I want a foggy scene where the zombies appear, and I want a scene where someone gets a fuck-off big drill through his head." "Uh, Lucio, I don't think zombies would be able to use power tools." "Well, shit, get one of the human characters to do it!"