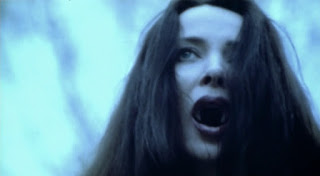 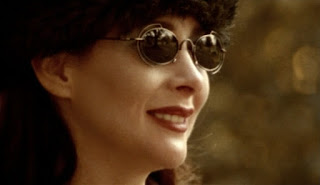 They don’t sparkle, either.

I almost wish ‘Razor Blade Smile’ had been made in 2008 not 1998; it would function as the biggest “fuck you” to the ‘Twilight’ saga ever. Put Lilith up against Stephanie Meyers’ milquetoast characters and Edward would get his deathly white arse handed to him on a bloodstained plate while Bella would most likely be inducted into the joys of Sapphic vampirism. 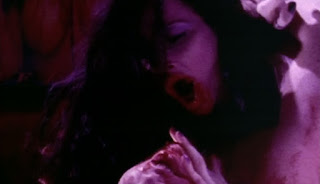 Made for about £20,000, it was a serious contender for the lowest budget British movie ever to enjoy a cinema release … until Marc Price’s no-budget zombie flick ‘Colin’ shuffled off with that particular accolade by dint of being made for £19,955 less. Still, the difference in production values is palpable, not least for ‘Razor Blade Smile’ being shot on celluloid. Indeed, West shoots for the moon, throwing in a black and white period set prologue, a Bond-style opening credits sequence, some snazzy time-lapse vistas of nocturnal London, a psychedelic dream sequence and all manner of sex violence, shoot-outs and swordplay as if he had a few million at his disposal. Put it this way, and let’s joyously invoke Werner Herzog’s philosophy that a filmmaker shouldn’t worry about money (“start making the film and the money will follow you into the street like a dog”), Tommy Wiseau’s ‘The Room’ was made for something in the region of $6million and looks like a home movie shot at a group therapy session while ‘Razor Blade Smile’ was made for next to nothing and looks like a motion picture.

The plot almost doesn’t matter (although it plays out straight-faced for most of the running time, ‘Razor Blade Smile’ is a comedy and its final scene is essentially the punchline) but just so we can tick the appropriate box, here goes: stone-cold hits, Sapphic shenanigans, corrupt cops, nemeses from the distant past, and the Illuminati. Intrigued as to how these elements knit together? Don’t even bother trying to second-guess; just watch the motherfucker and wallow in slack-jawed disbelief at the WTF-ness of it. 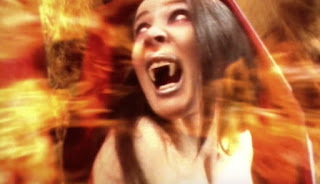 If West’s directorial style is a visual exegesis of Browning’s maxim that “a man’s reach should exceed his grasp”, then his leading lady tears into the material in similar fashion. Subtlety doesn’t exist as far as this movie is concerned. Eileen Daly, though incredibly versatile in many disciplines (actress, poet, musician), has generally been consigned to erotic features, and although ‘Razor Blade Smile’ requires her to shed clothing on a fairly regular basis it also gives her a chance to seize a lead role and run with it, and the lady gives it her all. By turns vampish, vicious and snarlingly sarcastic, she makes Lilith her own.
Posted by Neil Fulwood at 11:44 PM