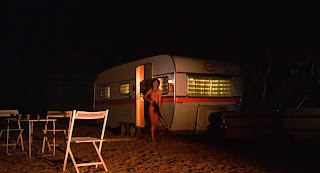 To hear Franco Nero, Corinne Clery and David Hess reminiscing on the special features “making of” documentary about how well they got on during filming and how proud they are of the work they produced, you’d think ‘Hitch-Hike’ was a high-point of world cinema, something worthy of comparison to Fellini or Antonioni. Actually, it’s a mean-spirited little exploitationer that was directed by Pasquale Festa Campanile.

Campanile was incredibly prolific in three disciplines: as novelist, screenwriter and director. He was apparently something of an aesthete. You wouldn’t think it to watch ‘Hitch-Hike’. Its original Italian language title is ‘Autostop Rosso Sangue’ which means exactly what you think. ‘Blood Red Autostop’ – not exactly subtle, is it? 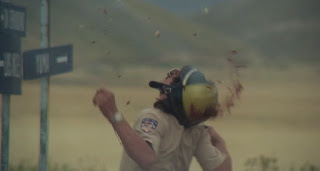 In a film utterly devoid of likeable or sympathetic characters our ostensible protagonists are Walter and Eve Mancini (Nero and Clery), an Italian couple holidaying in America. Walter is a burned out and borderline alcoholic reporter stuck in a stagnant decade-long marriage to his boss’s daughter. Apparently affluent enough (they’re tootling round the States in a big car with an even bigger caravan behind it and doing the odd bit of hunting with a pair of expensive-looking rifles), their lifestyle seems little compensation for the fact that they can’t stand each other. Walter is boorish and verbose. He treats his wife like a piece of meat – in an early scene, he mauls her in the back of 4x4 next to the corpse of a deer he’s just bagged – and that’s when he’s not fantasizing about doing her in. 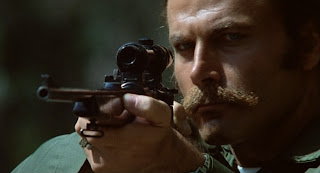 The opening credits play out over Walter tracking Eve through the cross-hairs of his rifle, only hesitating from pulling the trigger when a deer presents itself as an easier target. Eve is waspish and petulant, not averse to attracting attention from other quarters in order to score points against her husband.

After spending quarter of an hour with these two, it’s almost a relief when – against Walter’s express instructions – Eve pulls over to offer a hitch-hiker a lift. Oh, wait a minute, the hitch-hiker’s played by David Hess. Yeah, this one’s going to end badly. 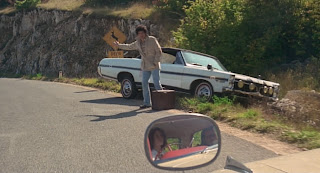 Hess began his career in the music industry, first as a singer (recording ‘All Shook Up’ a year before Elvis took it to the top of the charts and scoring a middling hit with a cover version of ‘Living Doll’), then as a song-writer (random pick from the CV: Pat Boone’s ‘Speedy Gonzales’), before establishing himself as an actor as the loathsome Krug in ‘Last House on the Left’ (he also wrote the score), a persona he continued to draw upon in ‘Hitch-Hike’ and ‘The House on the Edge of the Park’. Yes, folks, we live in a world where Wes Craven and Ruggero Deodato’s go-to guy when they needed a deranged rapist once recorded a Cliff Richard cover. Personally, I’m counting that one single fact as more mind-warpingly fucked up than anything I have ever featured as part of the Winter of Discontent. 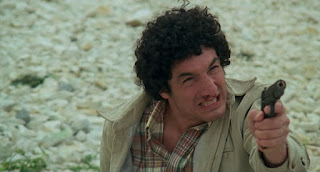 Hess’s character is called Adam, hence various references in the script – adapted from the sensitively titled novel ‘The Violence and the Fury’ by Peter Kane – to Adam and Eve. Which would imply that Walter is the serpent. Events in the last third suggest there might be something to this reading. Indeed, it’s in the last third that Campanile starts to do something really interesting with the material, having rather abruptly curtailed the Adam-terrorizes-Walter-and-Eve/will-Adam-rape-Eve-before-Walter-fights-back dynamic of the first hour. And let’s face it, said first hour trades on sexual threat and a leering objectification of its leading lady to such an extent that it would have become utterly tedious if Campanile had played his string out any longer. 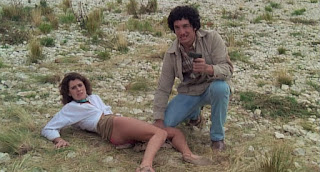 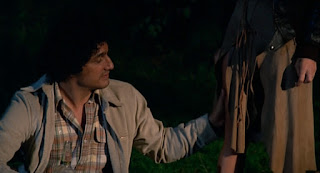 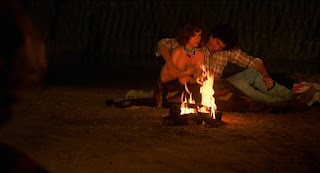 ‘Hitch-Hike’ delivers its best moments in the early scenes when Adam is happily playing Walter and Eve off against each other (at one point Adam, picking up on Walter’s disaffection with his job, offers him the story of a lifetime tagging along in his swathe of crime and brutality as official biographer, kind of a Beauchamp to his English Bob), and towards the end when a confluence of wounded masculinity and bad influence bring things full circle.

Challenges to Walter’s full-blooded Italian masculine imperative are rife: his marriage has devolved into a lust-hate relationship; his father-in-law is his employer, to whom his vocational ambitions are in hock; early on he breaks his fingers, necessitating a surrender of the driving duties to Eve; he gets drunk easily, suggesting an inability to hold his booze; Adam goads him into a stunningly politically incorrect debate on how gays are making the world their own (I can’t help but wonder whether the drunken dwarf’s monologue on blacks vs whites in ‘In Bruges’ owes a debt to ‘Hitch-Hike’); and ends up on the receiving end of a sadistically executed practical joke by a bunch of free-loading students. 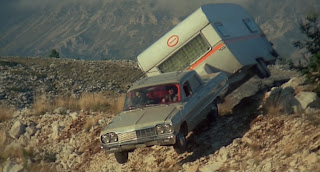 While the scenario presents him as the ostensible hero – tested to the limits in order to prove himself – Walter is continually painted as little better than Adam. Verbosity, quick-temperedness and self-importance are traits they shared. And while the scenario presents Eve as the ostensible victim she does herself no favours, deliberately provoking Adam when commonsense ought to compel her to fade into the background. That the sexual rivalry and one-upmanship resolves in the most ambiguous rape scene this side of ‘Straw Dogs’ just adds to the general unpleasantness and moral retardation on offer.

It’d be reprehensible and worthy of immediate dismissal … but it’s just too well made.
Posted by Neil Fulwood at 10:31 AM