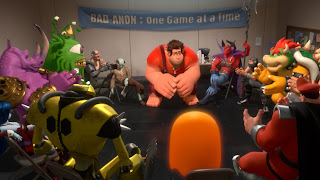 So: there’s an arcade game called Fix-It Felix in which a muscle-bound vandal goes around smashing up a tenement building and terrorizing its occupants. A Super-Mario-a-like with a golden hammer, the aforementioned Felix, racks up the points while repairing the damage and is the hero of the residents. When the arcade closes at the end of the day, Felix is feted and enjoys the champagne lifestyle at a series of parties, while Ralph (voiced by John C Reilly) is ostracized to a pile of bricks behind the tenement building that serves as his home. Periodically, he takes a train to Game Central and attends a Bad-Guys Anonymous meeting. Finally, disaffected with his lot in life, Ralph game jumps … only to discover other characters in other games with equally debilitating problems.

‘Wreck-It Ralph’ is gorgeously animated and visually inventive, but suffers from two main problems. Firstly, only the Fix-It Felix game feels like a genuine old-school arcade game. The other two main games are a backstory-heavy RPG epic that looks more suited to PS3 or X-Box, and a ludicrously pastel-coloured racing game that I can only describe as what you’d get if the cast of ‘Priscilla, Queen of the Desert’ kidnapped the programmers of Gran Turismo and brainwashed them by playing the Katy Perry ‘California Gurls’ video on a loop. For the story to work, the characters have to exist in a world of arcade games. Do kids even play games at arcades anymore? Every frame of ‘Wreck-It Ralph’ feels like it belongs in the mid-80s.

Secondly, the game jumping concept – so to-the-fore in the trailers – isn’t explored or exploited beyond the two games mentioned above. Indeed, most of the film takes place in the KatyPerryVille racing game, a milieu that’s overdesigned and oversaturated with primary colours. This is where Ralph meets fellow pariah Vanellope (Sarah Silverman) – a frontrunner for Most Annoying Sidekick of the Year. It’s also where the gently improving themes of humility and the value of friendship are ladled out and spoon-fed to the audience.

A much funnier narrative strand has the squeaky clean Felix (Jack McBrayer) join forces with gung-ho, weaponry-obsessed shoot-’em-up heroine Calhoun (Jane Lynch). It’s one of several moments in the film where the surface is briefly peeled back and the all possibilities of how much better it could have been are suddenly glimpsed.
Posted by Neil Fulwood at 8:26 PM