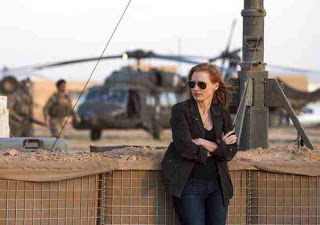 I wrote a piece about a month ago on the controversies surrounding ‘Django Unchained’ and ‘Zero Dark Thirty’, the idea being to acknowledge the elephant in the room and make any necessary refutations or counter-arguments. I’d then follow up with in-depth reviews of both films, concentrating on them purely as films and not having to get bogged down with the baggage attached to them.

That was the theory, anyway. In practice, I wrote the follow up ‘Django Unchained’ review then I pressganged every avoidance tactic I knew in order to postpone writing about ‘Zero Dark Thirty’. Why? Simple reason: I enjoyed the hell out of ‘Django Unchained’, despite a few minor flaws, but I found ‘Zero Dark Thirty’ ever so slightly boring. Yes, Jessica Chastain’s performance was as on key as we’ve come to expect from her; yes, Mark Strong’s single scene cameo did for the film what Alec Baldwin’s “fuck you, that’s my name” expostulation did for ‘Glengarry Glen Ross’; and yes, that superb last scene effectively underlined the essential pointlessness of everything Chastain’s character had gone through, everything she’d lost to the passage of time, everything her obsession had taken away from her.

Yes, the torture scenes were wincingly horrible. Yes, the attack on the compound was well staged. But I fidgeted for much of the two hour running time. I sneaked glances at my watch. I came out of the cinema in a fug of “meh”. Essentially, ‘Zero Dark Thirty’ is a two-hour espionage drama followed by a single but sustained action sequence. The problem is that the potentially fascinating espionage/intellence agency shenanigans come across under Bigelow’s direction as leaden and uninteresting. It doesn’t help when shaky-cam and whiplash tracking shots seem to conspire to direct attention away from the minutiae of undercover work.

It’s a difficult genre to get right. ‘Tinker Tailor Soldier Spy’ made the world of files and tradecraft riveting. ‘Zero Dark Thirty’ almost expects you to be bored by it. The battle’s lost before the attack helicopters even launch. And an action finale where a tooled-up black ops team take down a largely unarmed enemy force comprising mostly women and children doesn’t give you anything to holler for. A grunt’s radio confirmation that the target – one Osama bin Laden – has been executed “for God and country” is about as far from cathartic as you can get.
Posted by Neil Fulwood at 9:01 PM

Ive been avoiding it for the same reasons, it looks boring, but I'm sure I'll give it a go at some point, it looks like the kind of film that you watch only once and never revisit again. f

Agreed. I went to see it purely because of the controversy surrounding it (I always prefer to make up my own mind about contentious films), but it's one I have no interest in reapproaching.

It's appeal really lies if anywhere in the weird similarity between the Chastain character and Bigelow herself. Films like this and Argo are the sorts of things that look easy but involve so many moving parts, set-ups and scenes of complex negotiation, there's so much detail going on some of the scenes here you have to marvel at how well its assembled. The problem is, the assembly is the message. It's true story stuff similar to what Michael Mann tried and failed at in Public Enemies, like Northside 77, that kind of pulpy docudrama, and Bigelow never finds the mythic resonance within it all the way she did in Hurt Locker. Chastain's pretty but she's the least interesting element - imagine if it was Roaslind Russel instead or Paula Prentiss, even Eluzabeth Taylor - Chastain's few outbursts never achieve grandeur, we keep hoping for a Barbara Stanwyck style legitimate dangerous craziness, but she's just acting