Reposting this from three years ago, in honour of Steve Harris's 57th birthday. 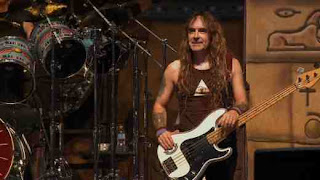 Given their thirty-five year history and the carousel of line-up changes that saw two vocalists come and go before they even recorded their first track, Paul Di’Anno ousted on the verge of mainstream success and replacement Bruce Dickinson (having departed to pursue a solo career after two world-conquering decades) being swiftly recruited back into the ranks when his replacement Blaze Bailey failed to find favour with the fans – never mind the comings and goings of drummers and guitarists – there is probably an incisive, provocative and controversial documentary to be made about Iron Maiden.

Scot McFadyen and Sam Dunn’s ‘Iron Maiden: Flight 666’ is not that documentary. However, it was quite evidently not meant to be and should therefore be judged under different criteria.

If James Brown is synonymous with – and doubtlessly deserves – the soubriquet “the hardest working man in rock ‘n’ roll” – then Iron Maiden are most definitely the hardest working band in heavy metal. ‘Flight 666’ documents their 2008 “Somewhere Back in Time” tour, involving 23 stadium shows in 13 countries over 45 days, Maiden clocking up somewhere in the region of 50,000 miles and appearing in front of half a million fans. (The title ‘Flight 666’ refers to the Boeing 757 the band used to ferry themselves and their crew between these engagements. Dickinson, a qualified pilot, captained the airliner, nicknamed “Ed Force One” after Iron Maiden’s mascot Eddie the Head, a huge illustration of whom bedecks the tailfin.) 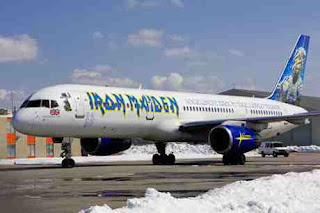 Now, I’ll freely confess – as much as I love the ‘Number of the Beast’ and ‘Powerslave’ albums (released in 1982 and 1984 respectively) – I’d considered Iron Maiden a spent force. Until their blistering reinvention with the 2006 album ‘A Matter of Life and Death’, that is.

‘Flight 666’ shows up me as a fair-weather fan, with the screaming hordes who greet Steve Harris et al in Mumbai, Sydney, Tokyo, Mexico City, Costa Rica, Bogota, São Paulo, Buenos Aires, Santiago and Puerto Rico providing an object lesson in what the concept of being a fan truly means. And kudos to the band for playing in half of these places, putting on fully-fledged arena stage shows in parts of the world where, as one tearful aficionado puts in, seeing Maiden live is a “once in a lifetime” event.

Elsewhere, a fan in Mumbai – a kid who was probably ten years away from being born when ‘Number of the Beast’ came out – grins at the camera and shouts, “Up the Irons”. A Japanese fan salutes Maiden for always being true to themselves and to the fans. This is the root of their appeal, and the point that ‘Flight 666’ effortlessly puts across: Iron Maiden have never given a shit about being cool or relevant or fitting in; all they’ve ever wanted to do is put on the best show imaginable because their fans deserve nothing less. Again I say: kudos. 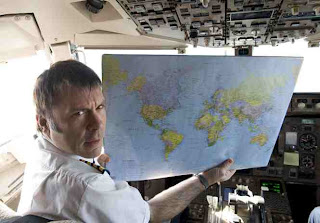 Does all this sound like an exercise in Maiden publicity rather than a documentary? Perhaps it is. But let’s face it, ladies and gents, we’re talking about Iron Maiden here. Not only are they the hardest working band in metal, they’re also the most unpretentious and least self-analytical. Whereas Metallica are represented cinematically by ‘Some Kind of Monster’, an epic account of a band in therapy, no film about Iron Maiden would ever tread that kind of path; and that’s simply because Maiden would never waste time or money hiring shrinks or “performance coaches” – they’d just talk it out over a couple of jars down the pub.

Therefore ‘Flight 666’ is the film is it because Maiden is the band it is: tight knit, focussed, fans first and no bullshit. Essentially, ‘Flight 666’ is a concert film with an unobtrusive amount of documentary footage, mostly showing the band as a bunch of down-to-earth guys, enjoying what they do and ribbing their manager Rob Smallwood for his gruff Yorkshire pragmatism, who seem entirely unaffected by their fame.

The closest analogue I can find to ‘Flight 666’ is Martin Scorsese’s ‘Shine a Light’, in which 15 minutes of documentary footage upfront is all that differentiates the project from a straightforward concert film. But whereas, in Scorsese’s film, the Rolling Stones are introduced by Bill Clinton in a performance in front of an exclusive crowd who probably shelled enough per ticked to pay off my mortgage, Iron Maiden keep it real by demonstrating a refreshing lack of agenda, a commendable commitment to their fans and a palpable energy and exuberance in their stage shows.
Posted by Neil Fulwood at 9:47 PM