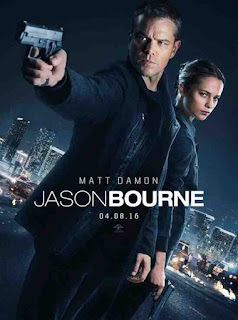 In one respect, ‘Jason Bourne’ simply offers more of the same: foot chase, bike chase, car chase, hand-to-hand fighting, tradecraft vs technology, big crowd scenes, yet another piece of the Bourne backstory jigsaw slotted into place. And it would be easy – and lazy – to leave an appraisal of the film at that.

The first debate any reviewer of ‘Jason Bourne’ needs to engage in – of more paramount importance, even, that “by Christ, that title’s lousy, why didn’t they just stick a polysyllabic noun after the dude’s name and respect tradition?” – is whether more of the same is necessarily a bad thing.

With only millimetric tweaks to the formula decade on decade, the Bond juggernaut has made enough money at the box office across half a century to buy out Croesus, bankrupt the Sultan of Brunei and play my-bank-account’s-bigger-than-your-bank-account with J.K. Rowling; and done so on more of the same. Harry Potter? More of the same for seven consecutive terms. Horror movie franchises? ‘Halloween’ and ‘Friday the 13th’ notched up double-figures and then got rebooted. More of the same.

Yes, ‘Jason Bourne’ deals in precisely the logistically jaw-dropping set pieces, individual vs the system battle of wits, and hyper-kinetically edited action that you’d want – nay demand – from the series; and let’s face it, Paul Greengrass defined the Bourne aesthetic with his first throw of the dice on ‘The Bourne Supremacy’. Technically, ‘The Bourne Ultimatum’ was an exercise in more of the same, and it remains the series’s high point.

The second debate is whether, almost a decade on from ‘Ultimatum’ and coming after Tony Gilroy’s formulaic (in a bad way) ‘The Bourne Legacy’, ‘Jason Bourne’ has any contemporary relevance. Or is this just the Matt and Paul nostalgia show? The answer to this one isn’t quite as clear cut.

‘Jason Bourne’ finds our buffed up anti-hero off the grid and dispiritingly reduced to bare-knuckle fighting in sundry European shitholes to earn a living. The decade that’s passed since ‘Ultimatum’ hasn’t been particularly kind to Nicky Parsons (Julia Stiles), either. She’s ex-CIA, embittered, and working for an Assange-kind reactionary hacker. Her penetration of CIA files pertaining to Treadstone, Blackbriar, Outcome and black ops imperative du jour Ironhand is the spark that ignites the film’s narrative. Not only does she pull down some serious heat on herself – in the former of CIA Director Robert Dewey (Tommy Lee Jones) and ruthlessly ambitious Cyber Ops head Heather Lee (Alicia Vikander) – but uncovers a crucial piece of information regarding Bourne’s recruitment to Treadstone. She makes contact with Bourne and the pair meet in Athens as an anti-government protest explodes into rioting. Into an already volatile situation comes The Asset (Vincent Cassel), under orders from Dewey and with his own agenda vis-à-vis eliminating Bourne.

This is good stuff, as labyrinthine and steeped in conspiracy as any of the previous instalments. Then Greengrass throws into the mix a sub-plot (which swiftly tries to interpose itself as the main plot) about a social media corporation called Deep Dream, run by visionary geek Aaron Kalloor (Riz Ahmed) who owes his success to favours and fund money provided by Dewey. Which immediately ties the film to the already tired “hey let’s use IT to spy on everyone in the whole wide world and if necessary assassinate them” narrative of ‘Captain America: The Winter Soldier’ and ‘Spectre’. A decade ago, Bond was playing catch-up with Bourne – it shouldn’t be the other way round.

It would be a cheap shot to describe ‘Jason Bourne’ as Bourne for the Twitter generation – it’s too smart for that; too well-crafted. The Athens sequence, as Bourne tries to extract Nicky from a city in chaos, comes a close second to the Waterloo station set-piece in ‘Ultimatum’ as Greengrass’s defining moment as Bourne director. The Las Vegas set car chase that powers Bourne towards his final confrontation is first class action cinema. Even the “CIA is run by murderous villains” formula gets a new spin with Vikander’s ambivalent character on course for the careerist coup in the final act.

How much more mileage the character has remains to be seen – ‘Jason Bourne’ sows enough seeds to structure at least one more film around – but with Damon still delivering the goods in his signature role and Greengrass’s superb craftsmanship and innate understanding of pace and tension, I’m happy to keep on taking the ride. Just sort the fucking title out next time, though, guys.
Posted by Neil Fulwood at 9:51 PM