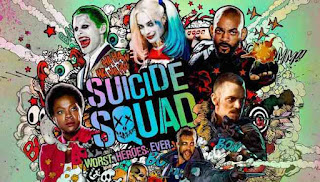 If David Ayer’s ‘Suicide Squad’ – the latest in DC’s roster of not-quite-there tentpole releases – never fully adds up to the sum of its parts, it’s not for want of trying. Truth be told, it tries to hard. Ayers, his cast and his production designers go for a snarling punk aesthetic … and emerge with J-pop kitsch. The narrative wants to have the desperate urgency of some unholy hybrid of ‘The Dirty Dozen’ and ‘Escape from New York’, but ladles on the references to those two classics so heavy-handily that it plods in their footsteps rather than sassily homaging them. And everyone involved wants the audience to take the eponymous mob of villains to their hearts so badly that said mob come across as loveable rather than the edgy anti-heroes of the source material.

“We’re the bad guys,” one of other of them declaims at regular intervals, and believe me the reminders are necessary. During the city-wide battle that occupies the second half of the movie, the most villainous thing that happens is when Harley Quinn (Margot Robbie) smashes a shop window and steals a handbag. As for the rest of them, Deadshot (Will Smith) sells out to the Establishment so his daughter can get an ivy league education; Boomerang (Jai Courtney), a bank robber whom the script doesn’t give much of a shit about; Diablo (Jay Hernandez), who has a Prometheus-like way with fire but spends most of the running time wanting to be a pacifist; Killer Croc (Adewale Akinnuoye-Agbaje), who’s not so much a villain as a genetic cock-up to be kept out of the way of the general citizenship; and one other dude who was in it for about two and a half minutes before getting written out just to prove that the Establishment are bigger bastards than the crims. Subversive, much?

The Establishment are represented by Griggs (Ike Barinholtz), a corrupt guard at the maximum security prison in which our soon-to-be-squad are incarcerated; Rick Flag (Joel Kinnaman), their handler; and Amanda Waller (Viola Davis), Flag’s boss and a hardass politico with a covert agenda. Waller is actually the most edgy, dangerous and morality-free character in the ensemble, and you quickly get the impression that she really doesn’t need the Suicide Squad. Just send her out into the streets of Midway City in her business suit, armed with nothing more than some withering put-downs, and most iterations of ancient and unstoppable evil would probably run home crying for their mom.

But still, the script calls for the Squad to mix it up with the aforementioned ancient and unstoppable evil. So please give a big hand, ladies and gentlemen – if only in sympathy for the thanklessness of her role – for The Enchantress, a witch who has possessed the body of archaeologist Dr June Moone (Cara Delevingne). As the film opens, Moone is in a relationship with Flag while Waller keeps the witch’s heart in a briefcase as leverage to keep both Flag and The Enchantress in check. The Enchantress quickly discovers a workaround and engineers a doomsday machine thingie that opens a hole in the sky. That’s about as much exposition as the script offers, by the way. Seriously: the similar extraterrestrial threat to humankind that provides the biggest plot device in ‘Teenage Mutant Ninja Turtles: Out of the Shadows’ benefits from a more rigorous scientific rationale. Throughout all of this, Delevingne, a likeable actress with, I think, the ability to slough off her supermodel image, is required to do little more than sway hypnotically while a mess of CGI splurges across the screen behind her. The film wastes her almost as egregiously as it does swordswoman Katana (Karen Fukuhara).

Anyway, our cuddly bunch of cutesy misfits … sorry, I mean the Suicide Squad … go into action to stop The Enchantress, close the hole in the sky and exchange banter. A word on the latter. When ‘Deadpool’ proved box office Viagra, the producers of ‘Suicide Squad’ decided their movie also needed to be irreverent and signed off on $10 million’s worth of reshoots to bump up the humour quotient. I laughed about four times during the just-over-two-hours. That’s two and a half mill per giggle. Bit steep, if you ask me.

Credit where it’s due, once Ayer and co. limp past the halfway mark, things begin to cohere and the Squad start behaving in a way that’s not forced. Also, Ayer stops relying on look-at-me directorial flashes and lets his cast do their thing. The action is decent, but much of it is staged as an ongoing battle with The Enchantress’s legion of once-humans, whom she transforms into beings that look like gooseberries gone evil. It’s an aesthetic misstep that damn near undermines the film. You want the Suicide Squad battling against seemingly insurmountable odds – i.e. for the threat to imply the non-squad part of the title – not look like they’re starring in a Ribena commercial.

But even the ’beena-berry business is better than the awfully structure first half, where vignettes introduce us to Deadshot and Harley Quinn in jail, then Waller introduces them all over again – along with the rest of the Squad – to the homeland security types who green-light the project, then Flag is introduced to the Squad, then the Squad are introduced to each other. It’s an inordinate amount of set-up for characters who are never fleshed out beyond a visual quirk and a music cue. Ayer’s reliance on music cues is wearying and sometimes pointless. Waller is introduced to the strains of the Stones’ ‘Sympathy for the Devil’, the lyric “I’m a man of wealth and taste” barely uttered before a black SUV discharges Viola Davis’s decidedly non-masculine form.

If Davis gives the best performance, Smith comes a close second – I’ve not seen him enjoying himself in a role this much in ages. Robbie has a lot of fun with Harley Quinn, but fares less well in the flashbacks as Dr Harleen Quinzel; her dark romance with The Joker (Jared Leto) – the only other character who genuinely seems dangerous – is too sketchily established and consequently never convinces, something not helped by the lack of chemistry between her and Leto. That said, Leto is otherwise effective. With two iconic and very different takes on The Joker already etched into the popular consciousness courtesy of Jack Nicholson and Heath Ledger, kudos to Leto for a full-steam-ahead-and-damn-the-torpedoes piece of characterisation. He doesn’t quite get enough screen time to make the character his own, but I’m eager to see what he does next time round.
Posted by Neil Fulwood at 6:19 PM