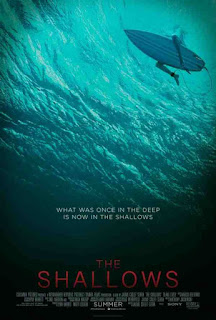 With the exception of a scene depicting a pick-up truck’s bumpy passage along a dirt track and an epilogue that’s geographically though not thematically removed, ‘The Shallows’ takes place entirely in one location. Picture it: a unspoilt cove somewhere in Mexico, sand stretching out in a white-gold scimitar, sun-dappled waters, a couple of rock formations a few hundred yards out from the beach, and a buoy about 40 yards away from them.

Into this locale, director Jaume Collet-Serra places young American tourist Nancy Adams (Blake Lively). Nancy’s travelled here in tribute to her recently deceased mother, an avid surfer who last visited the beach while pregnant with Nancy. Her father (Brett Cullen) wants her to come home and resume her studies at medical school. Her sister (Sedona Legge) just wants to go surfing with Nancy. All of this is established during a short facetime conversation while Nancy strolls along the beach. Anthony Jaswinski’s script doesn’t waste words.

While surfing, she meets two Mexican guys who ride the waves with her for a while. They advise her, before they head back to the beach, not to stay out too long. She assures them she’ll just catch one more wave. After they leave, and while Nancy is still sitting on her board, ruminatively looking out across the water, a dolphin bursts into the air near her, then dives back in, followed by several others. Enchanted, she paddles after them … at which point her bittersweet odyssey in tribute to her mother comes to an abrupt end.

The dolphins gone, the water suddenly becomes discoloured and Nancy sees the ravaged carcass of a whale floating ahead of her. Disgusted, she starts heading back to shore. Enter shark, which loses no time in knocking her off the surfboard and causing injury to her leg. She clambers onto the carcass, its skin breaking as tries to find a handhold. The shark responds by going at the dead whale in much the same way that wrecking balls go at buildings marked for total reclaim. Nancy swims like all hell for one of the rock formations, pulling herself out of the water milliseconds before becoming an hors d’oeuvre and exacerbating her wound in the process.

This takes us about 25 minutes into an admirably compact 86-minute feature. Strip out the aforementioned (brief) coda and a few minutes of end credits, and ‘The Shallows’ strands us with Nancy for an unremitting 45 minutes as various shark-driven circumstances compel her to navigate, often at great personal risk, between the two rock formations and the buoy. 45 minutes during which Collet-Serra mines Nancy’s plight for every possible drop of tension.

While the focus is on Nancy using her medical skills to self-treat her wounds (there’s a scene of jewellery-assisted suturing which I’m guessing isn’t NICE-approved) and her wits to try to attract attention or manoeuvre herself closer to shore, the film barely puts a foot wrong. The decision to go full-on ‘Jaws’ towards the end, Nancy wielding a Very pistol and barking out anti-squaloid rhetoric like a non-alcoholic version of Quint who looks better in a bikini, makes for some exciting moments and some questionable ones in roughly equal measure. I wouldn’t dream of spoiling for you the film’s single biggest misstep (it’s a howler) suffice to say that it’s a poorly composited bit of effects work that wouldn’t look out of place – aesthetically and conceptually – in ‘Sharktopus’.

But the moments where ‘The Shallows’ drops the ball add up to so little screen time that they’re almost cheesily forgivable, particularly when the rest of the film coheres as solidly and efficiently as a delivery system for edge-of-the-seat tension.
Posted by Neil Fulwood at 11:24 PM