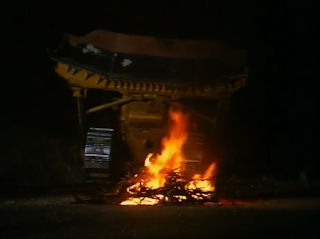 Less a carsploitation movie, this, than heavy-plantsploitation. Still, it makes for an interesting comparison with our last offering, Elliot Silverstein’s ‘The Car’. To begin with, ‘Killdozer’ clocks in at a compact 73 minutes – a running time Silverstein’s film would have benefited from. It has an automotive antagonist that is genuinely threatening: granted, a large earth-mover might not be capable of great speed, but it’s virtually unstoppable. It also offers a provenance for the dozer’s rampage, albeit one that doesn’t so much strain credulity as stretch it so thin that it tears in several places.

Like ‘The Car’, however, its script is hackneyed and the acting uniformly bad.

‘Killdozer’ is based on a novella by Theodore Sturgeon, originally published in Astounding Science Fiction magazine in 1944. Thirty years later, it got the TV movie treatment with Sturgeon co-writing the script (with Ed MacKillop) from an adaptation by Herbert F Solow, and Jerry London in the director’s chair. London is a seasoned TV director with, to the best of my knowledge, only one theatrical credit – the sex comedy ‘Goodnight Jackie’, made the same year as ‘Killdozer’ – to his name.

The novella is set on a Pacific island during World War Two, where a construction crew are building an airstrip; they accidentally release an ancient evil from a temple which possesses a D7 bulldozer. Mechanized chaos ensues. Solow’s adaptation – which responds to the dramatic and cinematic potential of a wartime setting and an ancient temple by jettisoning them entirely – relocates the action to the 1970s and has the construction crew working for an oil company. Oh, and the dozer’s now a D9.* 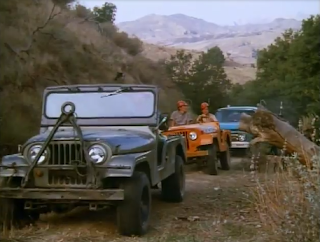 As regards the provenance of the evil force that infects the D9 … are you ready for this?

Yep. You read that right. In a prologue that positively glimmers with bad effects work, a meteorite goes spinning towards earth, impacts on a picturesque and uninhabited Pacific island and some time later – years, decades, centuries or millennia, the script doesn’t really clarify things – our hard-workin’, straight-talkin’, whisk(e)y-drinkin’ construction crew come along. The D9 bulldozer thuds its blade into the buried remains of the meteorite and in doing so releases an ancient evil. The ancient evil reacts in time-honoured ancient evil fashion and latches itself onto the thing that released it.

And whaddaya reckon a Caterpillar D9 suddenly possessed by ancient evil is gonna do? Damn straight, boy – it’s gonna bulldoze the fuck out of everything in its path. Now, you can take that sentence as a public service announcement that saves you 73-minutes of your life, or an exhortation to wholeheartedly invest that hour and a quarter of your mortality in the small screen shock-o-rama that is ‘Killdozer’. 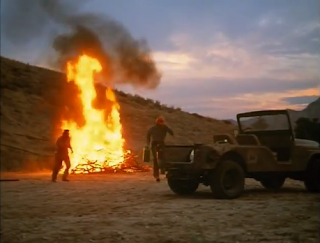 Because how can you not love a film called ‘Killdozer’? Why would you not want to get on board with the testosterone-fest of an all-male cast that includes Clint Walker, Robert Urich, James Wainwright, Carl Betz, Neville Brand and James A Watson Jr. Hell, even their characters’ names are macho: Lloyd, Mack, Dutch, Dennis, Chub and Al. Well, maybe not Chub. But the rest of them, hell yeah.

And how can you not love a film where our macho sextet battle a big fucking yellow hunk of metal as their numbers dwindle, their tempers fray, their voices get even more growly, the amount of stupid mistakes they make redefines the word ‘exponential’, and the level of the whisk(e)y bottle plummets like a UK prime minister’s approval ratings? 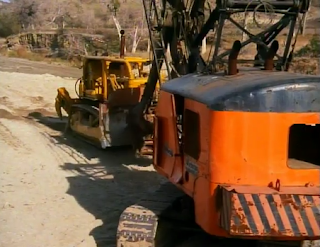 Dagnabit, this is a film that features a digger/dozer smackdown. It’s the only thing you’ll see of its kind outside of the steam train/traction engine rumble in the countryside in ‘The Titfield Thunderbolt’. And I can assure you, ladies and gentlemen, that ‘Killdozer’ is a fuckload more hardcore than an Ealing comedy.

That’s your review, folks – right there.

*Caterpillar only released three models between 1944 and 1977? That’s, like, one redesign per decade.
Posted by Neil Fulwood at 10:34 PM