WINTER OF DISCONTENT: The Sect 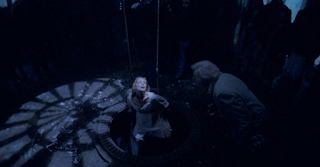 Michele Soavi made his debut in 1987 with ‘Stagefright’ (a.k.a. ‘Deliria’, a.k.a. ‘Aquarius’, a.k.a. ‘Bloody Bird’) which made effective use of its single setting (a ramshackle theatre). He followed this a couple of years later with ‘The Church’ (a.k.a. ‘Demons 3’), which also made impressive use of a single setting. If you’d been looking, in the late Eighties or early Nineties, for someone to helm an Italian language remake of ‘Assault on Precinct 13’, I reckon he’d have done a bang up job.

By 1994, he’d put his stamp on the idiosyncratic black comedy ‘Dellamorte Dellamore’ (a.k.a. ‘Cemetery Man’) which uses a single setting – the graveyard – to quite brilliant effect for a good two-thirds of its running time before deconstructing in terms of its narrative, structure and theme (there is a case to be made that this was a quite deliberate decision) once it strays outside of this clearly defined environment and interacts with its larger fictive world in increasingly fragmented and bizarre ways. 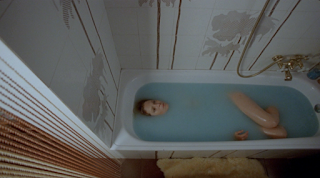 In retrospect, ‘The Sect’ seems like a logical aesthetic transition for Soavi. While its most crucial scenes take place in the rambling rural home of protagonist Miriam Kriesl (Kelly Curtis), and in the architecturally improbable basement beneath it, the film opens with a ten-minute prologue set in California in 1970 before relocating to the Frankfurt of 1991. Or rather a version of Frankfurt that’s about as weirdly non-Germanic as Freiburg and its dance academy in Argento’s ‘Suspiria’. Just as California is represented by a nondescript landscape and the least convincing set of hippies you’re ever likely to see.

Moreover, the California-set prologue does nothing narratively except introduce a chapter of the titular sect active in America, thereby setting up a scene much later in the film where two chapters meet and the leader of one as much as says “oh, hi there, we’re your opposite numbers from the States”, when the script could just as easily have had them come in from, say, Berlin or Dusseldorf. Nor does the German setting make any sense (there isn’t a mythology akin to the Three Mothers of ‘Suspiria’ that requires geographical specifics) and everything that happens in the movie could have happened without a single alteration to the script if the setting had been Rome, Milan or Florence. 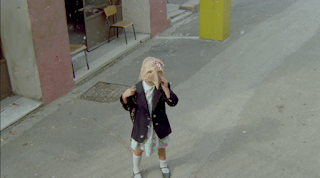 Nor do the next couple of sequences – a short and nasty murder in a suburban location, and an elaborate set-piece on a subway – add much to the story other than to establish that the members of the sect aren’t fucking around when it comes to disobedience and don’t flinch in their use of violence. They seem to be incorporated for no other reason than to big up the film’s epic scale after two smaller productions (‘The Sect’ had double the budget of ‘Stagefright’).

Once Soavi shunts his heroine onstage, however, and limits himself to her house, the cavernous spaces thereunder, the school she teaches at, and a nearby hospital, things bcome more focused. Even if the script does belabour her portentous meeting with enigmatic old cove Moebius Kelly (Herbert Lom) and take far too long to get to the weird shit that starts happening as a result of their meeting.

Credit where it’s due, though: the weird shit is certainly work the wait, whether it’s the surreal dreams that plague Miriam, full of crucifixion imagery and ‘Wicker Man’-style earth/nature/sex undercurrents, or the needlessly elaborate but memorable way that the sect isolate Miriam by removing from the board those few people who are close to her. The most striking and visceral example is their transformation of Miriam’s mousy colleague Catherine into a vamp trawling for rough trade at a truck stop … 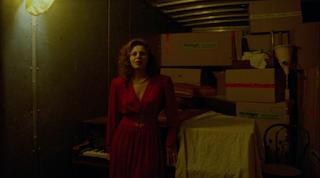 But then again, this is a film in which a hospital morgue is found in a leaky sub-basement area and looks like this: 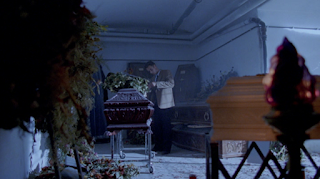 So either Germany is the weirdest place on earth, with its dance academies and weird cults and people who drive VWs (ve must be in Cher-mahn-hee, ja, because Kelly Curtis is drivink ein VW), or it’s a safe bet Dario Argento had a hand the production. (He did: producer and co-scripter.)

But this is mere carping (mixed with a healthy dash of cheap sarcasm); ‘The Sect’ is an Italian horror movie made at the tail-end of that country’s several-decades run of great horror movies that were stylish-to-the-nines and narrative clusterfucks. ‘The Sect’ never achieves the visual gorgeousness of Bava or Argento at his best or even Fulci on a good day. But it has weirdness in spades, it has the chutzpah to cast Curtis (in her only lead role) for no other reason than she’s Jamie Lee Curtis’s sister, it casts Herbert Lom and basically gets him to do a Donald Pleasance impersonation, and it shoots for the moon in terms of an incendiary good vs evil finale that it has neither the budget nor the creative energy to achieve on the scale it good clearly wants to.

Oh, and it predates Lars von Triers’s ‘Breaking the Waves’ by five years as an example of a film that tries to con you in its closing moments that it’s deep concerned with a redemptive quasi-theological ending when it fact it was getting its jollies over the nasty stuff all along. With the crucial difference that ‘The Sect’ is a lot more fun to watch than ‘Breaking the Waves’.
Posted by Neil Fulwood at 10:14 PM

This is the only Soavi movie that has eluded me, need to watch it as soon as possible. Soavi never dissapointed me, I hope this isn't the one that does. Also, isn't it sad that Soavi didn't continue his horror filmmaking? I mean, I love his horror movies.

It's frustrating, isn't it? Soavi had a great run of horror films from 'StageFright' through to 'Dellamorte Dellamore' - which suggested that he was on the cusp of incorporating political satire, social commentary and 'Twilight Zone' style weirdness into his playbook - and then nothing but TV work for the rest of his career.

Man I freaking love Dellamorte Dellamore, it's actually my favorite zombie movie because its beautiful, poetic, grotesque and gory all in one beautifully gothic movie. I rewatch it every year. Can't wait to get my hands on this one though, The Sect has my curiosity. I'm sure it has all those inconsistencies that so many Italian horror movies have, but I guess its part of Italian horror cinema's charm.