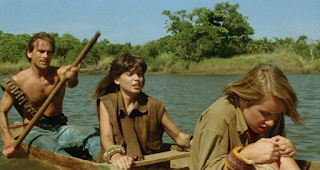 As an Italian exploitation sub-genre, the cannibal film had its genesis in 1972 with Umberto Lenzi’s ‘The Man from Deep River’ which was basically a rip-off of Eliot Silverstein’s 1970 gruel-a-thon ‘A Man Called Horse’ with the native American Indians replaced by Brazilian cannibals. The cycle really got its groove on in 1977-78 with Ruggero Deodato’s ‘Last Cannibal World’, Sergio Martino’s ‘Mountain of the Cannibal God’, and Joe d’Amato’s ‘Emanuelle and the Last Cannibals’ and ‘Papaya, Love Goddess of the Cannibals’. The d’Amato films had more to do with T&A than flesh-munching, but – hey! – that’s Joe d’Amato for you.

Whatever the merits (or otherwise) of these particular productions, they provided the momentum for what was the annus mirabilis of the cannibal film: 1980. If Altamont was the defining socio-political moment whereby the free love ethos of the Sixties transitioned to the political disenfranchisement and social upheaval of the Seventies – a decade that, for all its turbulence, proved to be a cauldron of creative risk-taking and new movements in music, literature and cinema – then a case can certainly be made for the fact that the against-the-system attitude that characterised the Seventies gave way to the soulless greed-is-good yuppiedom of the Eighties, and that the path was cleared by a cluster of cannibal films, two of which would come to define the sub-genre and gain notoriety for their prominence in the “video nasties” controversy that came to eat up (pun intended) so many column inches later on in that piss-awful decade.

At least half a dozen cannibal films were made in 1980, including Jess Franco’s ‘The Devil Hunter’ and – notable for being one of the very few non-Italian cannibal opuses – Tsui Hark’s ‘We’re Going to Eat You’. But the two that came to define the sub-genre, and remain the colossi against which trash movie fans test themselves, were Deodato’s ‘Cannibal Holocaust’ and Lenzi’s ‘Eaten Alive’. These two should really have been the cannibal movie’s “thank you and good night” moment, but this is exploitation cinema we’re talking about and as long as there was a hint of a buck to be made at the box office, some producer somewhere would sign off on another one. And thus it was that the cycle limped on intermittently till 1988 and the death rattle of Antonio Climati’s ‘The Green Inferno’ (a title borrowed over quarter of a century later by Eli Roth); these last few entries included Lenzi’s grim-as-fuck ‘Cannibal Ferox’, Franco’s ‘Diamonds of Kilimanjaro’ and Mario Gariazzo’s ‘White Slave’, a film so schizophrenically marketed that it appeared in some territories as ‘Amazonia: The Catherine Miles Story’ and in others as ‘Cannibal Holocaust 2’. 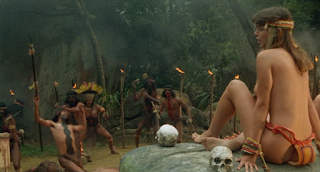 The film under consideration today was made in 1985 and I’m not even going to try to pretend that it represents some last great throw of the longpig dice. But this is the Winter of Discontent and cannibal movies are just one of those sub-genres that have to be done – like gialli, polizia, nazisploitation, nunsploitation and anything that stars David Hess – and besides ‘Massacre in Dinosaur Valley’ was directed by Michel Massimo Tarantini (under the pseudonym Michael E. Lemick) and if the dude who helmed ‘Policewoman on the Porno Squad’ and ‘Women in Fury’ isn’t a natural fit for the Winter of Discontent then I might as well just give up and watch reruns of ‘Thomas the Tank Engine’.

‘Massacre in Dinosaur Valley’ reunites Tarantini with ‘Women in Fury’ star Suzane Carvalho and gives her an equally thankless, frequently denuded and thoroughly sexually objectified role. After a very short career in exploitation films, Carvalho reinvented herself in spectacular fashion as a racing driver and I can’t help wondering how much her proficiency in this latter career was motivated by imagining Tarantini naked and clutching his extremities just behind the chequered flag as she powered towards him in several hundredweight of race-car …

But let’s park that image (again: pun intended) and stroll down the leafy expanse of Plot Synopsis Boulevard. ‘M in D V’ starts with respected academic Professor Ibanez (Leonidas Bayer) and his daughter Eva (Carvalho) arriving in a Brazilian backwater with the intent of seeking passage to the fabled Dinosaur Valley where Prof Ibanez can complete his palaeontological research. After a protracted first act which introduces fellow palaeontologist (or, to use his preferred appellation, “bone hunter”) Kevin Hall (Michael Sopkiw), Vietnam vet John Heinz (Milton Rodriguez) and his alcoholic wife Betty (Marta Anderson), photographer Jose (Joffre Soares) and fashion models Belinda (Susan Hahn) and Monica (Maria Reis), this mismatched bunch find themselves on the same light aircraft. A cockfight, a bar room brawl and some gratuitous nudity assists the viewer’s passage to this particular plot development, though no rationale is given as to why Jose and his models or the Heinzes are on the plane. Much is made, however, of the flight as off-the-books and into forbidden territory. 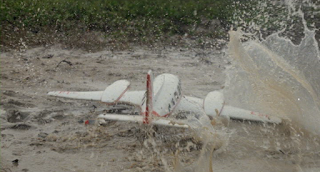 It hardly needs saying that the pilot encounters adverse weather conditions and someone tosses a toy plane into a puddle on the director’s front lawn the plane crashes. Three characters buy the farm in graphic detail while the rest emerge from the wreckage unscathed. There is no logic to this. Given the logistics of the forced landing, either they’d have all died or everyone would have stumbled out with a few abrasions at most. But I digress.

The survivors decide to make their way through the jungle, Heinz appointing himself leader on account of having done three tours in ’Nam. What follows is a “forty miles of bad road” type deal, as the group contend with leeches, snakes, cannibals, white slave traders, attempted human sacrifice and the gargantuan hindrance that is John Heinz and his planet-sized case of overcompensation. Example: Jose is set upon by piranha as the group splash through a river. Kevin plunges in to rescue him; Heinz sees his injuries as a liability and makes a brutal executive decision. Kevin attacks him and the two of them plunge into the selfsame piranha-infested waters, thrashing about for a good couple of minutes, all the time being resolutely untroubled by flesh-eviscerating fish. Quite what the piranha are doing the while – perhaps they’ve repaired to the opposite bank and started taking bets on the outcome – is left unanswered by the script.

As internal tensions within the increasingly depleted group reach boiling point, Kevin is split up from Eva and Belinda when the cannibal tribe attack. If I were trying to intellectualise this skeazy expanse of celluloid, I’d dwell on the fact that Eva and Belinda’s perils at the hands of the cannibal tribe occupy the middle third of the film rather than setting up its denouement, and they’re rescued by Kevin before much worse can happen than a flesh wound and some enforced nudity. Worse awaits them in the last twenty minutes or so when they fall into the clutches of slave-trader, unlicensed prospector and all-round sleazeball China (Carlos Imperial) who has designs on Eva, and his right-hand-woman Myara (Gloria Cristal) who gets all predatory towards Belinda. 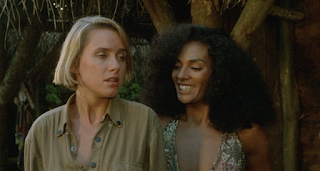 Up to this point, ‘M in D V’ has unspooled through a fairly obvious checklist of exploitation tropes: it’s dealt in punch-ups, gun play, softcore sex scenes and mild peril, and throughout it all Tarantini and co. have maintained an aesthetic that could almost pass for good natured. For 65 minutes, ‘M in D V’ happily parades itself as one of the goofiest, least self-aware exploitationers you’ll ever see. Then the Tarantini of ‘Women in Fury’ steps up to the base and brings the nasty. Which is fair dues: let’s not forget what kind of movie we’re watching here. But the shift is abrupt and his attempt, in the closing scenes, to cut back to sub-Indiana Jones jokey pastiche only serves to emphasise the tonal inconsistency.

Ultimately, though, ‘M in D V’ is damned by its own irrelevance. The best of the cannibal films rubbed the audience’s collective nose in filth in order to make a point: viewer complicity in ‘Cannibal Holocaust’; the correlation between religion, brainwashing, sacrifice and manipulation in ‘Eaten Alive’. The slenderest of cases can just about be made for ‘Amazonia’ in respect of tabloid salaciousness and the exploitation of the exotic by those whose white privilege is its own ulterior motive. ‘M in D V’ adds nothing to the dialogue beyond its brisk pace and the appeal of a heroine who deserved to be more heroic.
Posted by Neil Fulwood at 11:14 PM

There's a chance you're eligible to receive a $1,000 Amazon Gift Card.