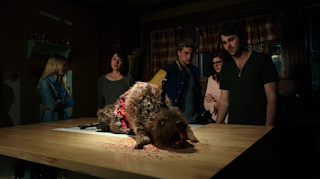 Yeah, Fulwood, we’ve heard it before. Like in the opening scene of ‘Eight Legged Freaks’.

Well, yeah, but with a crucial difference. So listen: there’s these two hillbilly dudes in a truck loaded with barrels of toxic waste and they’re having the mother of all politically incorrect conversations about how dating a guy is easier than dating a woman (“we didn’t disagree about anything, it was real easy – except for the sex: the sex was brutal”) when, as a result of not driving with due care and attention, they hit a deer. The impact jolts a barrel of toxic waste off the back of the truck, whereupon it rolls down into the river and –

FFS, Fulwood, we said we’d heard this one before. The toxic waste infects the water supply causing genetic mutation and zombie-type shenanigans.

Well, yeah, but listen to me, motherfuckers: this toxic waste turns the local beaver population rabid and when you try to fight them off, they prove functionally immortal. These beavers come back from the dead. Because they’re zombie beavers. 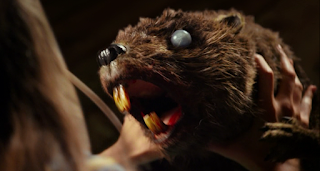 Hey! Hey! Where’s everyone going? Hey! Come back! Aw, c’mon, this kind of no-budget z-grade trash is why you hang out at The Agitation of the Mind and, brother, you know it!

Director Jordan Rubin and his co-scripters Jonathan and Al Kaplan know it, too. Well, not about The Agitation of the Mind, probably. In fact I’d be omigosh surprised if they’d even heard of this blog. But they know exactly what kind of audience they’re catering to and go all out to make exactly the kind of movie you anticipate (gleefully, with an underlying hint of guilt) when you see the title ‘Zombeavers’ on a DVD cover.

Let’s get jiggy with a plot synopsis, shall we? Shortly after the two sexually confused hillbillies lose the barrel of toxic waste, three coed friends (or rather frenemies, given the internal tensions) turn up at a lakeside cabin in rural America for a weekend ostensibly dedicated to helping Jen (Lexi Atkins) get over the heartbreak of her boyfriend cheating on her. Jen’s gal pals are bossy-little-thing Mary (Rachel Melvin) and trash-talking slapper Zoe (Cortney Palm). And if you think I’m being unfair in describing Zoe as a trash-talking slapper, just try spending five minutes’ screentime in her company. 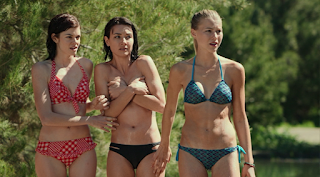 No sooner have they taken to the lake (Zoe indulging in a spot of skinny-dipping) and fallen afoul of the locals than their boyfriends – or at least Mary and Zoe’s boyfriends and Jen’s now thoroughly cold-shouldered ex – turn up without invitation and with booze, partying and sex on their minds. Let’s meet The Three Douches. Jen’s asshole ex-boyfriend is Sam (Hutch Dano), Zoe’s obnoxious boyfriend is Buck (Peter Gilroy), and Mary’s slightly less douchey but still wanker-by-association boyfriend is Tommy (Jake Weary, who alone amongst the cast can actually claim a legimate film career on account of having been in ‘It Follows’*).

Buck and Tommy get their end away that night. Sam gets Jen’s kneecap in his gonads. Jen is startled in the bathroom by an aggressive beaver, which the guys dispatch with a baseball bat after some debate about who should tackle the creature. None acquit themselves as paragons of knight-in-shining-armour type behaviour. Next day, the sextet are at the lake when the zombeavers attack. Although Buck sustains injury, the group make it back to the cabin. The zombeavers lay siege. It’s the most pathetic siege in the history of horror cinema: 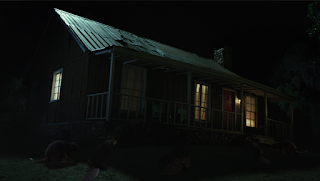 What follows is pretty much as you’d expect from a zombie film: foiled escape attempts, massively amplified internal tensions, gruesome deaths and the inability to get a mobile signal or find a functional landline (the visual punchline of zombeaver prints next to the severed cable is a nice touch). The drama around Sam’s dalliance behind Jen’s back is also resolved, and it’s touching to see that such a trashy outing as ‘Zombeavers’ can actually make time for its characters’ emotional closure before getting down to the business of their mortal closure. Hey folks, I’m kidding; the Sam/Jen thing merely allows for a bit of padding so that a short-as-it-is-anyway movie can just about clear the bar re: feature length.

Does it do anything unexpected, or anything new with the genre? Does it rug-pull with expectations or monkey with the formula? No, of course it fucking doesn’t! It’s a film called ‘Zombeavers’ – did you really expect it to be a game-changer?** It has zombie beavers and it makes no bones about the fact that they’re puppets (seriously: if Jim Henson had got fucked up on peyote and decided to make a movie that wasn’t for the kiddies, he’d have come up with exactly these furry-toothy-undead critters). It has a cast of college kids (albeit played by actors in their late twenties), so it features douchey behaviour and nudity. It’s a zombie movie, so people get chomped and/or eviscerated. Oh, and you know how the rules stipulate that those who are bitten become zombies themselves? Well, what do you think happens to people who are bitten by zombeavers?

You’re shaking your head now, aren’t you? Facepalming? Mumbling something along the lines of “oh, for the love of all things unholy, please tell me the filmmakers don’t actually go there”?

*Though I’ll be perfectly honest in admitting that I found ‘Zombeavers’ a far more rewarding film than ‘It Follows’.

**Although the closing credits song arguably is. It’s a brilliant piece of camp which recaps the entire narrative in the form of a Sinatra-esque swing number. Sample lyric: “Contaminated by toxic goo / A genetic mistake / They’re semi-aquatic, they’re hungry for you / Boys and girls, stay away from the lake”. Sample lyric #2: “Look out, they’re coming through the walls / Your girlfriend’s chewing off your balls / Zombeeeeeeeeavers!”).
Posted by Neil Fulwood at 8:56 PM