Whisper of the Heart

Thanks to my wife Paula for the following article:

The opening credits of ‘Whisper of the Heart’ play out to "Country Roads", an incongruous choice given that the song is all about the rural idyll – fields, mountains, open spaces – and the film is set in the bustling sprawl of Toyko.

Shizuku, a 14-year old girl with a talent for writing, spoofs the song as "Concrete Roads". A copy of her lyric falls into the hands of self-assured 15-year old Seiji who passes judgement: "It’s just as corny as the original." 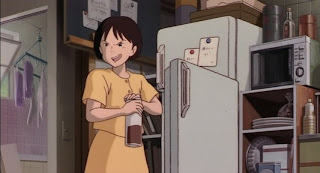 The scene is funny, true to life, and beautifully animated – it’s the point at which, only a short while into the two-hour running time, ‘Whisper of the Heart’ completely won me over and remains one of my all-time favourite Studio Ghibli productions.

Although not directed by Hayao Miyazaki – it was made by his protégé Yoshifumi Kondo, who tragically died aged just 47 a few years after ‘Whisper of the Heart’ was released – it certainly has the look and feel of a Miyazaki film, owing in no small amount to the master himself having storyboarded it. More than that, though, I think it’s a case of ‘Whisper of the Heart’ being a Studio Ghibli film. A Ghibli is a Ghibli the way a Pixar is a Pixar and that in itself is a guarantee of quality. You don’t really have to worry about who directed it.

‘Whisper of the Heart’ defies easy synopsis – it’s more about family interrelationships, friendship and first love than an actual clearly-defined narrative – but two wonderfully random plot devices set things in motion. The first is voracious reader Shizuku’s realisation that every book she checks out of the library has already been borrowed by the same person. She’s intrigued; it fires her imagination. 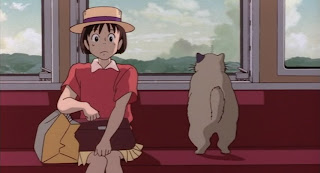 The second comes in the very obsese shape of a cat named Moon. Casually sharing Shizuku’s seat during a train ride, Moon trots off as the train stops and Shizuku finds herself following him across town. He leads her to an antiques shop whose avuncular owner is Seiji’s grandfather. He shows her a figurine of a cat in top hat and tails, a cane elegantly clutched between its paws, which he tells her is called The Baron. He avows that he’ll never sell the piece until its reunited with a matching, female, figurine. Again, Shizuku’s imagination is sparked. 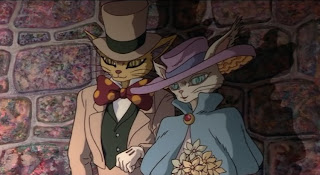 Moon and The Baron: cats as catalyst. Shizuku begins writing a story inspired by The Baron. The world of her imagination drifts in and out of the real world. A lovely scene has her imagine The Baron and his companion riding the airwaves through a skyline dotted with floating planetoids; the camera pans down into the more corporeal atmosphere of the sky above Toyko and down further as Shizuku goes racing to the bottom of a flight of steps. In another memorable moment her imagination takes the discovery of a jewel by the heroine of her story (which is fast becoming a novel) and replaces the gem with a dead baby bird. It’s a reminder of the dark areas a child’s imagination can drift into, as well as a potent metaphor for the stresses and insecurities Shizuku experiences as she engages with the writing process, scared that she doesn't have a literary gem inside of her. 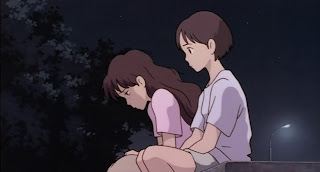 Kondo depicts realistic issues in Shizuku’s thorny relationship with her elder sister, her parents’ concerns over her isolationism as she shuts herself away to write (eventually, though, her father comes through in full support, urging her to follow her heart), and the tentative and sometimes prickly beginnings of her romance with Seiji.
‘Whisper of the Heart’ is fairly slowly paced but as rich in characterisation and emotion as it is visually. The humorous and the heartfelt are perfectly balanced. There’s an inspired reference to earlier Ghibli film ‘Porco Rosso’ that’s as cleverly placed as it is unexpected. The animation is detailed and evocative. And "Country Roads" sounds so much nicer in Japanese. 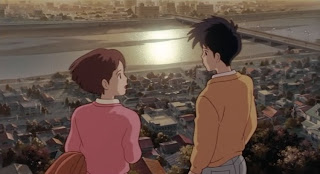 by Paula Fulwood
Posted by Neil Fulwood at 8:40 PM