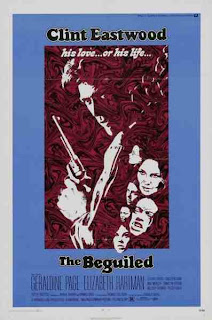 ‘The Beguiled’ opens with stark titles over a montage of archive photographs from the civil war. At first quietly, but then with increasing urgency and volume, a militaristic drumbeat fills the the soundtrack. A newcomer to ‘The Beguiled’ could be forgiven the false expectation of a dry-run for ‘The Outlaw Josey Wales’.

The opening credits sequence is the only thing in ‘The Beguiled’ that conforms to expectations. The remaining 100 minutes play out like a prototype of ‘Misery’ but re-imagined as a western and directed by Roman Polanski. Confined setting, pressure cooker environment, sexual repression and a smattering of controversial moments. Director Don Siegel tosses one of them out pretty much straightaway. Picture the scene:

The montage of archive photographs segue into the first scene proper. The film is sepia for a few seconds, colour eventually bleeding into it, as if the scene were a continuation of the montage (Peckinpah would use a similar technique in ‘Cross of Iron’). A young girl (Pamelyn Ferdin) runs through the woods, gathering mushrooms. She comes across a wounded Union soldier, John McBurney (Clint Eastwood). Overcoming her initial fright, she helps him to his feet with the intention of taking him back to the school she attends. Hearing a patrol approaching, McBurney drags her into the undergrowth. “What’s your name?” he asks her. She tells him: Amy. McBurney asks her age. Twelve. “Old enough for kisses,” McBurney muses and covers her mouth with his as the patrol gallops past.

Dodgy enough for you yet? No? Okay, let’s meet the staff and some of Amy’s fellow pupils at the Farnsworth Academy for Young Ladies. There’s the owner and headmistress, Martha Farnsworth (Geraldine Page). She’s strict, matronly and gives the appearance of being the last word in prim and proper. You’d hardly think she used to have an incestuous relationship with her brother, or that she has a sexual interest in her devoted and virginal assistant Edwina (Elizabeth Hartman).

Edwina’s frigidity is contrasted with the melting pot of hormones constituted by the girls in her class. Castigating one of them for lack of attention during a French class, the girl in question replies, “I can’t concentrate because the war sounds so near … If the Union win, they’ll rape us all.”

Once Amy shows up with the injured McBurney, however, thoughts are less of rape than seduction. Amy’s sold on him already; the next expression of interest is from seductive nymphette Carol (Jo Ann Harris). Forget the Polanski comparisons for the moment; we’re in Nabokov territory here, with Carol as Lolita only a few years older and with more cleavage. McBurney’s not exactly your Humbert Humbert type, though. He’s younger, hunkier and has country boy charm in spades. 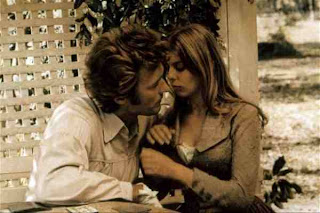 Martha orders that McBurney’s wounds be tended and that he is allowed to recover before being handed over to the next Confederate patrol. He is kept in a locked room. Nursing duties fall to black servant Hallie (Mae Mercer) – by Martha’s orders – and Edwina … by her own volition. When Carol intrudes on Edwina bathing the semi-conscious McBurney (the film was made in 1971, with Eastwood at the prime of his macho physicality) and offers to relieve her (and doubtless give McBurney a little relief as well), Edwina slaps her across the face and calls her a hussy.

McBurney first uses his charm on Martha, concerned with preventing his handing over to enemy troops. He smooth-talks Edwina. He appeals to Hallie, seeking to create empathy by suggesting they’re both prisoners. He doesn’t have to expend any effort with Carol, she’s so desperate to jump his bones it might as well be spelled out in neon. In time, even Martha becomes attracted by his sexual charisma, arranging for his room to be left unlocked one night so that he might visit her. He takes advantage of the situation to pay a visit to Carol instead, only for Edwina to catch them in flagrante delecto. What happens next moves ‘The Beguiled’ from western to chamber piece/character study to horror movie.

The genius of ‘The Beguiled’ is it never tips into the misogynistic fantasia many (male) directors would have made of it: an injured man trying to escape the clutches of a group of women who would variously betray, imprison or enslave him. True, he suffers at their hands as the film progresses – the first to turn against him is Carol when she catches him canoodling with Edwina and perpetrates an act that almost gets him arrested by a patrol – but by the time things get really dark and nasty, there’s no doubt that he deserves it.

For all that Siegel and scriptwriters John B. Sherry and Grimes Grice* (working from the novel by Thomas Cullinan) unambiguously establish the psychologically disturbed Martha as the villain of the piece, only the most blinkered Eastwood aficionado could mistake McBurney for the hero. From getting amorous with a twelve year old girl to romanticising his tawdry past (two crucial monologues are counterpointed by flashbacks that reveal McBurney as a blatant liar) to the act of violence that poisons even Amy against him, McBurney is a case study in compromised morality. 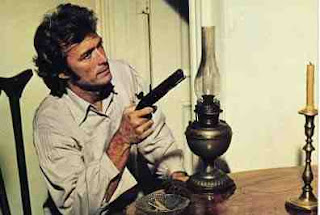 His darkest moment comes when, having reasserted his masculinity over his female captors (and, by this point, abusers), he holds Martha and gunpoint and declares that he intends to satisfy himself with whomever “wants the pleasure of my company”. He then turns his attention to Hallie: “You’re a handsome woman. I might start with you.” A flashback has Hallie cornered by Martha’s brother in the barn; he rips her bodice open and advances on her before she fends him off with a pitchfork. The implication is clear: just as Martha and her brother were two halves of an illicit union, McBurney and Martha are two sides of the same coin.
Reputedly Don Siegel’s personal favourite of his films, ‘The Beguiled’ is as potent an example of Southern gothic as has been put on screen. The atmosphere of sexual hysteria is barely contained, but Siegel manages to keep enough of a lid on things that the film never degenerates into histrionics or cheap melodrama. He also summons a wealth of fine performances. Eastwood digs beneath his laconic veneer to present a portrait of reptilian charm and moral corruption. It’s one of the first glimpses in his filmography of a flawed and not necessarily likeable protagonist.
But it’s the women of the cast to whom the film belongs. Page channels the kind of psychological intensity usually reserved for playing Lady Macbeth. Hartman invests Edwina with a heartbreaking fragility. Harris imbues Carol’s scenes with such jailbait sensuality that I was very glad to discover she was 22 at the time of shooting and not her character’s age. Lastly, Ferdin excels as Amy, the immediacy of her performance belying her age. In many respects it’s the understated scene, very late in the film, where Amy is persuaded into a certain course of action, that characterises ‘The Beguiled’. It is a film of bitter ironies and dark motivations, and all of them spring from the fallibility of the human condition.

*Pseudonyms for Albert Maltz and Irene Kamp. Maltz had been blacklisted as one of the “Hollywood Ten”.
Posted by Neil Fulwood at 4:41 PM

"The remaining 100 minutes play out like a prototype of ‘Misery’ but re-imagined as a western and directed by Roman Polanski."

This here is some good writing.

As you probably noticed, this film gave me a lot more to get my teeth into than 'Coogan's Bluff'.

'Play Misty for Me' up next.

I just finished watching this film (from an adult perspective) after remembering it as a child so many years ago. As a child, of course I remember the leg amputation and "the Last Supper" scene at the end, but the rest of it blew me away as viewed now. The Beguiled tells the kind of story where it's impossible to see how any of this could turn out well in the end. So much of it makes sense on so many levels and spins such a tangled web, it's almost Shakespearean (making it very appropriate for you to mention Page's MacBeth-like role). A nice example of the brilliant films that came out then, when the film industry was no longer hampered by the ratings system, and thoughts and ideas that had only been hinted at before could now be illustrated. Kudos to all involved, especially Eastwood, for playing against type.

icysugarspike said...
This comment has been removed by the author.
6:57 PM