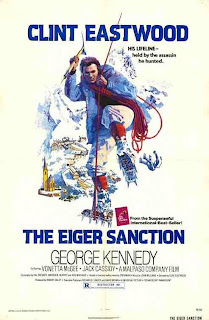 I’ve mentioned before in this month of all things Eastwood that the rugged icon is best known for westerns and cop movies. Throw in the catch-all category “thriller” to encompass everything from ‘Play Misty for Me’ and ‘Thunderbolt and Lightfoot’ to the likes of ‘In the Line of Fire’ and ‘Absolute Power’, factor in a handful of war movies, and the lion’s share of Eastwood’s filmography emerges as resolutely genre based.

Arguably, the two least successful genres Eastwood has ventured into have been sci-fi and espionage, although Eastwood was savvy enough to yoke his one sci-fi movie, ‘Space Cowboys’, to the iconography of his earlier westerns and to play the whole thing as a comedy. Neither of his espionage outings, ‘The Eiger Sanction’ and ‘Firefox’, play to the established Eastwood iconography; both are crushingly humourless in their execution.

Whereas Eastwood’s anti-hero persona is well-suited to the espionage genre, his physicality and the trigger-happy aesthetics of The Man With No Name and Dirt Harry aren’t. You couldn’t image Clint Eastwood in a Graham Greene, John le Carré or Len Deighton adaptation. He doesn’t have the sly but world-weary demeanour of George Smiley or the roll-with-the-punches tenacity of Bernard Samson.

And he doesn’t exactly spring to mind as a first choice for Jonathan Hemlock, either. Hemlock was the protagonist of two novels by mono-monikered scribe Trevanian, ‘The Eiger Sanction’ and ‘The Loo Sanction’. In bringing the first of these to the screen, nobody involved in the project seemed to realise that the novel was a spoof. An elegant, subtle and intelligently written one, but a spoof nonetheless. Hemlock – variously a scholar, art collector and cold-blooded assassin – represents a cocking of the snook to a certain Mr Bond. (To be fair, though, the satire is probably better suited to the page, where Trevanian’s prose by its very elegance shows up Ian Fleming’s breathless, telegraphic journalist’s style.)

Granted, a novel can be brought to the screen with significant tonal differences and still be a great work in its own right. Classic example: Pierre Bouille’s ‘The Bridge on the River Kwai’ is satirical; David Lean’s film version is played straight.

‘The Eiger Sanction’, however, suffers from being played straight. It runs a gamut of clichés – former agent brought out of retirement for One Last Job; his erstwhile paymasters have ulterior motives; coercion into doing One Last One Last Job; rigorous training programme to get him fit for the mission; revelations from the past; obligatory Twist In The Tale – that are palatable in Trevanian’s hands purely because he’s playing with the conventions of the genre. Under Eastwood’s direction, these are things to be got out of the way in a lip-service approach to narrative before the real business gets underway.

The real business of ‘The Eiger Sanction’ is the mountain-climbing sequences. And it has to be said, for all of its earlier deficiencies, the last half hour is jaw-droppingly impressive, every frame of it shot for real. No matte backgrounds, no studio mock-ups, no compositing or special effects or trick photography. Bruce Surtees, Eastwood’s regular lensman, captures the vertiginous dangers of the Eiger, his camera appraising the treacherous slopes with an all-too-believable wariness.

Ultimately, ‘The Eiger Sanction’ doesn’t invite or respond to critical analysis. ‘The Eiger Sanction’ is solely about visual spectacle. And when Eastwood breaks out the pitons and the guide rope and starts climbing, the film delivers.
Posted by Neil Fulwood at 10:33 PM

You're right about the humourless nature of this particular film. But I still like it...its just a very weird Eastwood vehicle. It benefits from a great score by John Williams if I remember correctly.

You may find something of value or interest in my own scribblings at The Celluloid Highway - Only one Eastwood review on there at the moment and thats for GRAN TORINO.

After a storm comes a calm.

Shaun - thanks for the comment. I've linked to The Celluloid Highway - good blog you've got, and anyone who puts a Herzog quote on his banner gets my vote!

No one ever seems to mention that the climbing sequence in the book is based on a real climb in 1936 in which all four climbers died. The only initial survivor was left hamging near to the railway tunnel opening but died of exhaustion and cold before he could be rescued.