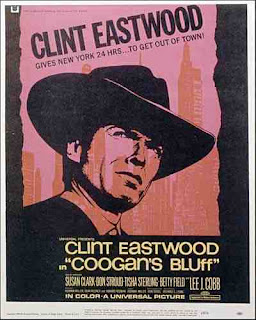 Ask anyone to name Clint Eastwood’s two most iconic roles and I guarantee – guarantee – the answer will be The Man With No Name and Dirty Harry. The cowboy and the cop. Although it predates ‘Dirty Harry’, Don Siegel’s culture-clash thriller ‘Coogan’s Bluff’ synthesizes these two aspects of the archetypal Eastwood persona. In fact, ‘Coogan’s Bluff’ is primarily remembered as the transitional film that moved the Eastwood of the westerns into a contemporary urban environment. This reputation seems to have lent the film a cachet that its slow pacing, reliance on stereotypes and moderately effective set-pieces don’t quite live up to.

‘Coogan’s Bluff’ was the first of five collaborations between Siegel and Eastwood over a decade (six if you count Eastwood casting Siegel in a small role in his directorial debut ‘Play Misty for Me’) and ranks with ‘Two Mules for Sister Sara’ as one of the least interesting things they did together. There’s none of the grand guignol perversity of ‘The Beguiled’, little of the iconography of ‘Dirty Harry’ and the pitting of Eastwood’s laconic minimalist acting style against the scenery chewing of Lee J. Cobb isn’t quite as interesting as the Clint Eastwood/Patrick McGoohan contrast in ‘Escape from Alcatraz’.

The slender narrative of ‘Coogan’s Bluff’ is basically this: Arizona deputy sheriff Coogan (Eastwood), at loggerheads with his superiors over his laissez faire attitude to the job and all-round disregard for the rule book, is sent to New York to repatriate cocky young prisoner Ringerman (Don Stroud). When his NYPD contact Lt McElroy (Cobb) reveals that Ringerman is drying out from an LSD trip in the prison medical bay and there’s no telling how long it’ll be until the court releases him into Coogan’s care, Coogan decides to take matters into his own hands – only for Ringerman to promptly escape.

The script – credited to three writers – starts off in high gear with Coogan on home turf, tracking down and arresting a crook who’s headed out into the wilds with a high-powered rifle and the survival skills indigenous to a Native American. Two men, the elements, a desolate landscape. Plenty of western tropes. Clint in a cowboy hat. Five minutes into the movie and things are ticking along nicely. Then the scene shifts to the big city and the narrative meanders for a while until Ringerman escapes and Coogan’s pursuit puts some pace back into things for the last half hour. 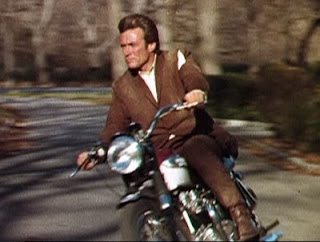 A loose sequence of fish-out-of-water vignettes accounts for much of the first hour. Coogan rubs McElroy up the wrong way. Coogan rubs police psychiatrist Julie (Susan Clark) up the wrong way, before the two of them start flitting around each other in a pas de deux of a romantic subplot that goes unresolved. Coogan encounters hookers, hippies, pushers and pimps. A standing joke has everyone in New York mistake him for a Texan. Eastwood’s low-key performance style, where a snarl and a scowl speak a thousand words, could have made for some inspired moments, but the humour never quite gels.

Still, clocking in at just over an hour and a half, ‘Coogan’s Bluff’ remains a worthwhile slice of entertainment that never outstays its welcome. Siegel was too adept a film-maker to turn in anything that was less than watchable (even his lesser work, such as ‘The Black Windmill’ and ‘Telefon’, have a vigorous proficiency about them) and ‘Coogan’s Bluff’ boasts a brilliantly edited pool-hall fight and a climactic motorcycle chase that palpably communicates the speed and desperation of the pursuit. The Eastwood cop persona is effectively established (setting up ‘Dirty Harry’ three years later) and Stroud’s villain is good value.

Ultimately, ‘Coogan’s Bluff’ is fun but forgettable. Its supporting characters are ciphers and the filmmakers’ evocation of the underground scene (a nightclub called the Pigeon Toed Orange Peel!) is laughable. Nonetheless, I picked it as the lead-off for this month’s celebration of all things Clint because I wanted to pay proper tribute to the importance of Don Siegel in Eastwood’s career. Following the safe bet of ‘Two Mules for Sister Sara’ they re-teamed for ‘The Beguiled’, a psycho-sexual drama that is unlike anything else on Eastwood’s CV, and it’s this offbeat, disturbing and atmospheric opus that I’ll be reviewing next.
Posted by Neil Fulwood at 10:57 AM

Can't wait for your take on The Beguiled.

This is probably my least favorite Eastwood movie. Sister Sara might just be hitting it's marks, but it does hit those marks, this... not so much.

Plus how anyone can keep a straight face through "The Pigeon Toed Orange Peel" sequence is beyond me. It looks a lost scene from one of the Ebert Meyer collaborations.

My favourite moment from the whole misconceived P.T.O.P. sequence is when Eastwood, faced with a guy who's about to pull a knife on him, smashes a bottle and jabs it at said goon, jagged end first.

The bottle has a candle stuffed in its neck and during the entire stand-off I was in hysterics, pleading for it to set fire to Eastwood's sleeve. Unfortunately, it being Clint Eastwood, nothing uncool is allowed to happen to him and the conflagration doesn't occur. Shame. It would have been the cherry on the icing.

let me show you the end results of this particular *ONE-DIMENSIONAL SCIENTIFIC MODE* of thinking that is called *CRITICAL THINKING*, which is completely divorced from any human objectives...

this style has been perfected by dawkins, pz, randi and the other *NEW ATHEISTS*


see, I just want to make it clear to the rest of you:


jen is unable to see that there is a CONFLICT BETWEEN EROS & SCIENCE....

see how we take a term and convert it into its AUTHENTIC POLITICAL DIMENSION - THAT OF LIBERATION - not just merely harmless expression...

Visit for the BOOBQUAKE:

The TV series McCloud owed much to this movie

Archavist - thank you for an infinitely more sensible comment than DM's.

let me show you the end results of this particular *ONE-DIMENSIONAL SCIENTIFIC MODE*
of thinking that is called *CRITICAL THINKING*, which is completely divorced from
any human objectives...

this style has been perfected by dawkins, pz, randi and the other *NEW ATHEISTS*


see, I just want to make it clear to the rest of you:


jen is unable to see that there is a CONFLICT BETWEEN EROS & SCIENCE....

see how we take a term and convert it into its AUTHENTIC POLITICAL DIMENSION - THAT
OF LIBERATION - not just merely harmless expression...

Visit for the BOOBQUAKE:


how about I believe in WHATEVER I want and you little fuckers have nothing to say!

I'm kind of busy with the next Eastwood review, but if anyone would like to help DM pick up his toys and put them back in the pram, I'm sure he'd appreciate it.

See this is why I so often feel the need to point out that I'm a Christian. So that way people will know that we're not ALL assholes.

Not saying I'm not occasionally an asshole, but its normally about decidedly non religious things.