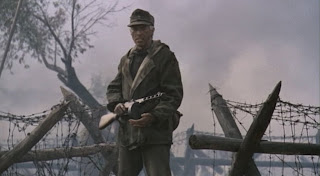 Background
Prior to sending Peckinpah a copy of Willi Heinrich's novel 'The Willing Flesh' with a view to collaborating with the maverick director on an adaptation, Wolf C. Hartwig's experience as a producer was limited to such masterpieces of world cinema as 'Mit Eva fing die Sunde an' ('Sin Began With Eve') and 'Schulmadchen-Report' (you'll get that one without the subtitles) parts 1 to 10. What this purveyor of pornography with a penchant for schoolgirl uniforms thought he was getting into is a matter for speculation.

Shooting took place in Yugoslavia, when production costs were cheap. Nonetheless, by the time shooting began, Hartwig had secured considerably less than the $4 million the film was budgeted at. His failings as a producer also extended to securing locations, ensuring costumes were ready and sets built by the appropriate time in the shooting schedule, and arranging the hire of military vehicles and hardware. In particular, Peckinpah had depended on the provision of a fleet of tanks and several aircraft. The aircraft never materialised and only three rusting, barely mobile tanks were made available. It's one of Peckinpah's great achievements on 'Cross of Iron' that he manages to make said tanks look like an entire approaching army.

Peckinpah's drinking was pronounced. Days were lost due to blackouts or confusion over scenes already shot. Weddle's biography has Peckinpah, after the picture has wrapped, discussing with his DoP the logistics of a huge battle scene that would never be shot. With money not just running out but unavailable to begin with, Peckinpah sunk $90,000 of his own savings into the production. Then Hartwig and co-producer Alex Winitsky arrived on set with the news that the scripted denouement was not to be filmed and a new, audience-friendly and (crucially) cheap to film ending was to replace it. Peckinpah was so distraught that star James Coburn took it upon himself to inform Hartwig and Winitsky in vehemently unambiguous terms that the film was going to end the way Peckinpah intended it; he also threw their asses off the set.

'Cross of Iron' finished filming as per the original ending and to Peckinpah's dictates. Sadly, it made little impression at the box office and, desperate to recoup his investment in it, Peckinpah accepted another director-for-hire assignment: the execrable 'Convoy'. 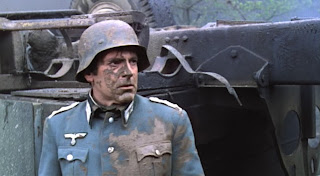 Synopsis
The Russian Front, 1943. Sergeant Steiner (James Coburn) leads his tight-knit troop back from an incursion behind enemy lines to discover that a new officer has been transferred in. Captain Stransy (Maximillian Schell) is Prussian, rigidly bound by the hierarchy of rank and has one objective: to win the Iron Cross. To put it mildly, Steiner and Stransky don't get on. A Russian attack on their position results in heavy losses and Steiner is badly injured. While recuperating in a field hospital, Steiner enters into a brief relationship with a nurse, Eva (Senta Berger). Rather than spin out his convalescence, however, he rejoins several of his men who have been deemed fit enough to be returned to active duty. Back at the front line, Stransky attempts to solicit Steiner as a witness to a report that paints the German counter-attack as successful (actually it was a shambles) and his part in it heroic (actually he proved himself a coward). Steiner refuses. Another sortie behind enemy lines sees Steiner and his men faced with a dangerous crossing through no-man's-land. Stransky seizes the opportunity to take Steiner out ... 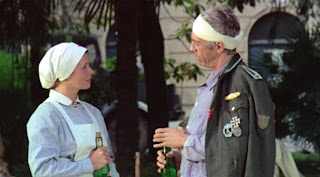 Analysis
David Weddle quotes James Coburn recalling pre-production on 'Cross of Iron'. The actor accompanied Peckinpah to the German film archives in Koblenz. They viewed German newsreel footage and Third Reich documentaries. In London they accessed similar archives. "We'd see this German newsreel film ... of some battle. Then when we got to London we saw the same footage edited completely differently for a propaganda film for the Russians. It's like there was this independent film unit out there shooting the war and selling the footage to both sides! Two totally different ideologies were editing it for their own purposes. So what we realised - and this really hit Sam - was that they were both liars."
This revelation clearly informs the opening credits sequence. A masterclass in montage and juxtaposition - right down to the soundtrack, which alternates between the innocent and plaintive strains of a child singing a folk song and a bombastically militaristic orchestral score - Peckinpah crafts a panoply of archive material into a provocative and brilliantly realised four minute mini-movie.
The opening credits already establish themselves as one of the film's great set-pieces. Others include the Russian onslaught and disastrous counter-attack, which segues into the sequence dealing with Steiner's experiences in the field hospital. Peckinpah's use of montage and editing are again unparalleled. In a purely imagistic fashion, he takes us from the visceral reality of the battlefield into a landscape that is bleaker, more disturbing and infinitely more difficult to conjure on film: that of his protagonist's psychological state, Steiner's mind fragmented by trauma. The cut from muzzle flash to the pencil beam of a nurse's torch strobing across Steiner's eyes is joltingly effective.
As the agitation of Steiner's mind subsides during his spell at the hospital, Peckinpah uses his relationship with Eva and a supposedly morale-boosting visit from a high-ranking office to make an almost Nietzschean comment on the effects on humanitarian behaviour by protracted conditions of war. "Do you love the war so much?" Eva demands at one point."Is that what's wrong with you, Steiner? Are you afraid of what you will do without it?" Steiner departs wordlessly and returns to the front. The scene is in stark contrast to an earlier moment during the bigwig's visit: the officer inspects the injured men, shaking hands and wishing them a quick recovery (naturlich: he wants them returned to active duty ASAP). Offering his hand to a heavily bandaged soldier in a wheelchair, a stump is thrust out at him in return. The officer hesitates then proffers his left hand. Another stump. The officer looks almost affronted and withdraws his hand. The soldier brings his leg sharply up in what can be taken as both a brutal parody of the Nazi salute and how much he'd like to kick the officer in the balls. 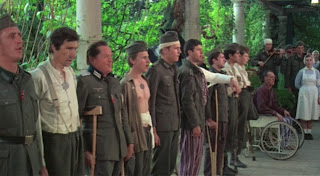 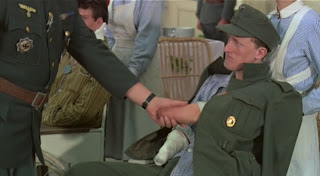 The blunt absence of sentimentality evidenced in these scenes is characteristic of 'Cross of Iron' at its most successful. Steiner's pragmatism is as unsparingly and minimalistically expressed as Pike Bishop's. His pre-reconnaisance instructions to the platoon: "Just bring what you need to kill with." On being questioned as to why some of his men died: "Bullets, mortar fire, artillery salvoes, bad luck, syphillis, the usual things." On religion: "I believe God is a sadist but probably doesn't even know it." The film's aesthetic demonstrates how Steiner's character has been formed: his antagonism towards his superiors is a natural by-product of his tight, "by example" leadership of his men. Steiner's only loyalty is to his men. There is no loyalty to country, to cause, to politics. As with Wolfgang Petersen's 'Das Boot', you quickly forget the characters are German; they simply become men, their souls brutalised by the horrors of war, their survival a day-to-day business. Uniforms look identical when plastered with mud or riddled with bullets. A photograph of Hitler is jarred from its position by mortar fire in an early scene and never rehung. Stransky's obsession with winning the Iron Cross is punctured when Colonel Brandt (James Mason) blithely says "Oh, we can give you one of mine" and unclips it from his tunic. The Iron Cross is thus devalued; worth no more than the "tin bill" that Will mocks Pat Garrett for wearing or the one that Sheriff Baker keeps in a kitchen drawer. The point is rammed home by Steiner (who, like Brandt, has been awarded the medal) in one of his frequent disagreements with Stransky:
Steiner: Why do you want it so badly? It's just a worthless piece of metal. Look.
Stransky: It's not worthless to me.
Steiner: Why is it so important to you? Tell me, Captain, why?
Stransky: Sergeant, if I go back without the Iron Cross, I couldn't face my family.
For all that the opening credits explicitly establish time, place and nationality, such specificity swiftly drains away as scene after scene plays out against the constant falling of shells in the background, In an early scene, a photograph of Hitler is jarred from its position when a shell lands nearby and is never rehung. The only other time Hitler is mentioned is during this telling exchange:
Steiner: Didn't your Fuhrer say that all class distinctions were to be abolished?
Stransky: I am an officer of the Wehrmacht! I have never been a Party member. I am a Prussian aristocrat and I don't want to be put into the same category.
Steiner: We agree for once.
'Cross of Iron' isn't about nationality; it's about class. It's about what smidgin of humanity can survive under continual bombardment, the omnipresence of death and the futility of war itself. It's about debunking the myth, present in cinema throughout the history of the medium, that conflict is iconic, heroic and glorious. It's about stealing the war movie back from propagandists. Sam Fuller's 'The Big Red One' posits that "the only glory in war is to survive". 'Cross of Iron' questions even this dictum. Peckinpah closes 'Cross of Iron' - his last great movie - with a quote from Berthold Brecht: "Don't rejoice in his defeat, you mean. For though the world stood up and stopped the bastard, the bitch that bore him is in heat again." 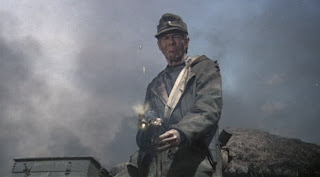 In 'Cross of Iron' there is no glory. None whatsoever.
Posted by Neil Fulwood at 1:47 PM

Just a slight clarification: the movie was apparently popular in Europe, according to Enzo G. Castellari, enough so to inspire a fresh wave of Italian WW2 movies, but your point stands insofar as all this would do little to improve Peckinpah's situation in the U.S.

Excellent Analysis of a difficult movie.

Unfortunately the only copy I've been able to view is Pan And Scan, so I still feel as though I truly haven't seen this one.

Glad I am not the only one who likes this film :)

I unfortunately don't think much of this film. The book is superb, but the problem for me is the casting.
James Coburn just isn't Steiner for me. He is also mis-cast as Reisman in The Dirty Dozen. Reisman was an experienced and professional OSS officer and I just don't think Coburn captured that.
Coburn played the hard man but I still don't think he got the roles right in both these films. He just happened to be a big name star who had played in war and western films and is so often the case became somewhat type-cast.
They are both superb books, but unfortunately they suffer as so many book to film adaptations do.
Still worth watching as they are cinematic history with the Coburn and Peckinpah connection.

Hi!..I must return as I have made an error in my last post. James Coburn did not play Reisman in The Dirty Dozen it was Lee Marvin. My apologies!
But even then Marvin was even more type cast than Coburn, and I never really thought much of him as an actor.
Marvin didn't pull of Reisman and really the film is a total disgrace in the name of the book. It really gets on my goat when a film maker digresses from the book so much.